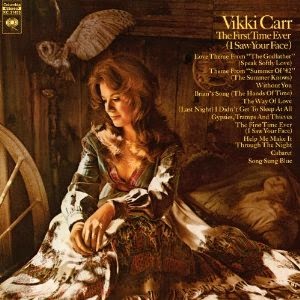 Vikki Carr’s 1972 LP The First Time Ever (I Saw Your Face) has now received its first official CD release, thanks to Real Gone Music. This Expanded Edition contains plenty of bonus material as well. Vikki Carr is known for her 1967 hit “It Must Be Him” (from the album of the same name), and then later for several Spanish-language hit singles. The First Time Ever contains covers of several well-known and much-loved songs. (Interestingly, Johnny Mathis also released an album titled The First Time Ever (I Saw Your Face) in 1972, on which he covers many of the same songs.)

Vikki Carr’s vocal delivery is more playful on “(Last Night) I Didn’t Get To Sleep At All,” a song I’ve always enjoyed. But there is still an honesty and beauty to this song. The 5th Dimension had a hit with this song, which was written by Tony Macaulay. Vikki Carr also does a good job on her rendition of “Gypsies, Tramps And Thieves,” a tune made famous by Cher the previous year.

I love the quiet, almost timid way her cover of “Without You” starts, with piano and her vocals. Her vocals have a sadness, a delicate element that is perfect. On the chorus, she first delivers the lines almost matter-of-factly, which is wonderful. When she then belts out the next lines, it doesn’t seem quite right – there is too much glory, too much power, rather than heartache in it. I much prefer her intimate whispers on this one. This song was originally done by Badfinger, and most famously done by Harry Nilsson.

She follows that with a country-flavored cover of Neil Diamond’s “Song Sung Blue.” The backing vocals feel a bit silly when they echo “willow” and “pillow.” She has a chance to stretch out and let it rip on “Cabaret,” a song that acts as a delightful celebration.

Vikki Carr whispers some lines from Kris Kristofferson’s “Help Me Make It Through The Night,” but this cover loses any sense of intimacy because of the strings. There’s a bit too much production to this version. I definitely prefer the more stripped-down renditions of this song. (Check out Harry Dean Stanton’s version on Partly Fiction.)

The big production much better suits the original album’s closing track, a wonderful version of “The Way Of Love.” Her vocals really shine on this track. Cher had a hit with this song, which was written by Al Stillman and Jacques Dieval.

“Let The Band Play On” is one of my favorite tracks on this CD, a fun tune written by Gloria Sklerov and Harry Lloyd. Here is a taste of the lyrics: “So let the band play on/And let the music swell to fill the room/Spin the flashing lights until it’s dawn/Just let the band play on/But no sad songs of love that ends too soon.” This and “Reflections” were released as a single in 1972.

There is something really delightful and totally enjoyable about “Borrowed Time,” which was released as a single in 1974. Vikki Carr then moves toward disco with “Puttin’ Myself In Your Hands (Gettin’ Ready To Move),” a 1975 single. “My body's on the east coast/But my heart is still out west/And after one sweet taste of you/I’m coming back to get the rest.” The single’s other side, “I Don’t Want A Sometimes Man,” is also included in these bonus tracks.

The bonus tracks conclude with a couple of Christmas tunes – “What Child Is This?” and “It Came Upon A Midnight Clear.” The first appeared on a compilation from 1972, while the second was originally released as a promotional single in 1974. (I love the original tune “Greensleeves,” but strongly dislike the Christmas version, “What Child Is This?”)

The First Time Ever (I Saw Your Face) Expanded Edition was released on June 3, 2014 through Real Gone Music.
Posted by Michael Doherty at 1:03 PM