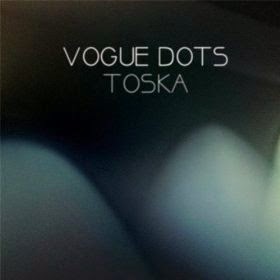 Vogue Dots are a Canadian electronic pop duo made up of Babette Hayward and Tynan Dunfield. Toska is their debut release, an EP full of slower grooves and interesting, somewhat haunting vocals. Three of the five tracks are originals. They also cover a couple of fellow Canadian artists – A.A. Wallace and Cousins.

“Skinny Thing” starts off in a kind of pretty mood, then takes on more of a club beat, though still with a slower groove. It’s when the vocals come in that I begin to really appreciate what they’re doing. Babette Hayward has a good voice, and the vocals have a light, ethereal quality. Also, there is kind of a 1980s vibe to the song during the verses which I really like. “I’ll let the symptoms save me/Or just play the baby/Why can’t you pull your weight/Freedom makes you hesitate.”

They follow that with a cover of A.A. Wallace’s “Temporal Suspension,” kind of a slow tune with a steady rhythm. In Babette’s vocal delivery, she seems to hold back a bit, to keep something from us. “I don’t believe that a temporal suspension is out of reach/I don’t believe that a massive collision is all we need/To prove that we’re alone, there’s nothing where we’re going/So we should fight the future because it’s so impressionable.” And a few minutes in, her vocals seem more at a distance for a moment, like she’s getting lost or enveloped by the surrounding sounds, by the environment she finds herself in. I really like this track a lot. There is more of a beauty to this version than is heard in A.A. Wallace’s original. By the way, I love the line “As far as evil goes, it keeps me on my toes.”

That is followed by the EP’s other cover, Cousins’ “Thunder.” Vogue Dots’ rendition is quite a bit different from Cousins’ original. This has a harder, tenser, more industrial sound at the beginning. Babette’s vocals then come floating in through the surrounding static, and they have an almost angelic quality at first, in wonderful contrast to some of the sounds.  She then breaks through, suddenly closer to us, but even then there is something of a distance, as her vocals are like a repeated message coming over the radio waves, while the thumping of our own heartbeat seems in the fore. As always, I could do without the rain sound effect at the end. (It’s not in the original.)

“Mercy” has a strange, otherworldly feel to it, like breath pulled in hard, a reversed life, but with gorgeous, angelic vocals over it. A voice from beyond, perhaps, but friendly, gentle, pretty. This, to me, is the most intriguing track of the CD.

“Turns And Turns” begins with an electronic landscape, just this side of dreaming. It then comes in as a wonderful pop song, perhaps the closest to a mainstream feel of all the tracks, but certainly not dull. In fact, there is something quite beautiful here, and it might be the CD’s strongest track. It’s always interesting to see which lines are chosen for repetition. Here, it is “Honey, I’m bored.” Seamus Dalton plays guitar on this track.

Posted by Michael Doherty at 6:21 PM