The Dream Academy: “The Morning Lasted All Day – A Retrospective” (2014) CD Review 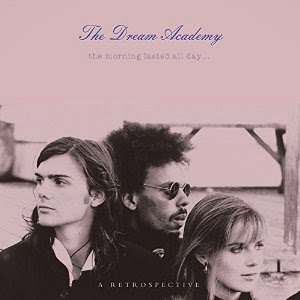 I love a lot of 1980s pop music. That is, the music from 1980 through 1985. It was the last time that pop music really worked for me on a general scale, just before it became the realm of crap like Whitesnake, Poison, Whitney Houston and Tiffany. But right before everything went to hell came what was one of the most interesting songs of the entire decade – “Life In A Northern Town,” by The Dream Academy. It was unlike anything else that was being played at the time, and shockingly it became a hit. This was in the days when a hit song also had a decent chance of being a good song. I purchased the LP and listened to that track over and over.

And now there’s an opportunity to revisit that song, as well as a lot of other excellent music by The Dream Academy, with the release of The Morning Lasted All Day – A Retrospective, a two-disc set put out by Real Gone Music. This set includes some previously unreleased tracks, including the instrumental version of “Power To Believe” which was used in Plains, Trains And Automobiles, and a new song, “Sunrising.” It also includes new liner notes written by Nick Laird-Clowes, with thoughts on each track.

“Life In A Northern Town”

“Life In A Northern Town” is the song that turned me on to this band, and is also the song that gives this collection its name. (According to the liner notes, “The Morning Lasted All Day” was the tune’s original title.) This song still has a beauty and a power. It was that power that surprised me when I first heard this as a teenager, those great bursts on percussion along with “Ah hey ma ma ma.” I couldn’t get enough of this song back then, and it has lost none of its beauty, none of its charm, in the intervening decades. (I also enjoyed the music video for this song, though I have to admit that was in part because I had a bit of a crush on Kate St. John.)

This collection follows that song with another track form that 1985 self-titled LP, “The Love Parade.” It’s a cool tune, though certainly a more straight-forward pop song. But check out these lines: “They’re lonely together, when they’re not apart/It feels like she’s holding on to someone else in the dark.” Not bad, eh? This song was also released as a single.

The flip side of the single was “Girl In A Million (For Edie Sedgwick).” I don’t think I’d ever heard this track before.  It’s an oddly moving song. I really like the touches on guitar in the instrumental section toward the end.

“The Edge Of Forever”

“The Edge Of Forever” was actually the second track of that 1985 LP, following “Life In A Northern Town,” and it’s one of my personal favorite songs from that album. It features Adam Peters on cello, an instrument I’m always happy to hear, and Gary Barnacle on tenor saxophone. The song has a great energy, then allows itself to relax, to take a breath, before building again. And it’s then that both the cello and saxophone are used so well. This song was featured in the film Ferris Bueller’s Day Off.

“In Places On The Run” is another favorite of mine, and here it follows “Johnny (New Light),” just as it does on the band’s first album, one track running into the other. “In Places On The Run” has something of an odd beauty to it, feeling both familiar and exotic, soothing yet intriguing. It’s kind of a magical song.

“Power To Believe” is a cool track from the band’s second album, Remembrance Days. It was also released as a single. Also included on this two-disc set is the previously unreleased instrumental version of this song, which was heard in the film Planes, Trains And Automobiles.

“Here,” another track from Remembrance Days, is a highlight for me. I love the overall vibe and sound of this one. It’s so pretty, and I love what Nick Laird-Clowes does on vocals on this track. And there is something glorious in the instrumental sections, especially because of what Kate St. John is doing on cor anglais. It’s just a wonderful song, one I can listen to over and over.

“Indian Summer” has a sweet, easy vibe during the verses, and a brighter, louder feel during the chorus. Lindsey Buckingham provides some backing vocals on this track. “I think I knew those days would never come again.”

The Smiths and John Lennon

Most of the tracks in this collection are originals, but there is an absolutely wonderful rendition of The Smiths’ “Please, Please, Please Let Me Get What I Want.” An instrumental version of this song was featured in the film Ferris Bueller’s Day Off (in that famous the museum scene).

The second disc features six previously unreleased tracks, including an alternate mix of “The Demonstration,” an interesting song with an earnestness and anger in the vocals mixed with a somewhat dark beauty to the music. There is also some interesting information on this track in the liner notes.

“The Chosen Few” is one of my favorites. It has a different feel from most of the band’s other material, in part because of the presence of slide guitar. There is something fun about this tune.

“The Last Days Of The War” is an early track, recorded soon after “Life In A Northern Town” and then misplaced. It finally sees a release on this two-disc set. It’s an excellent and somewhat haunting track, with some good lyrics: “If you don't want to catch your death, there's a million others you can catch instead.” This song has some really interesting and unexpected changes, from a march on the snare to a sort of waltz.

The Morning Lasted All Day - A Retrospective concludes with a new track, “Sunrising.” I was so excited to hear something new from this band, and I was certainly not disappointed. There is something pretty about this song, in the simplicity of its base, the keyboard part, and the wonderful vocals.

As much as I'm enjoying these two discs, I do wish this set included the extended and the 7-inch mix versions of “Life In A Northern Town,” as well as “Test Tape No. 3,” that single’s flip side. And it would be great to also have that instrumental version of “Please, Please, Please Let Me Get What I Want.” There is certainly enough space for some more tracks. But perhaps I’m just getting greedy.

The Dream Academy is Nick Laird-Clowes on lead vocals and guitar; Kate St. John on vocals, oboe, cor anglais, piano, accordion and saxophone; and Gilbert Gabriel on vocals and keyboards. Most of the songs were written by Laird-Clowes and Gabriel.

The Morning Lasted All Day – A Retrospective was released on July 29, 2014 through Real Gone Music.
Posted by Michael Doherty at 9:15 PM