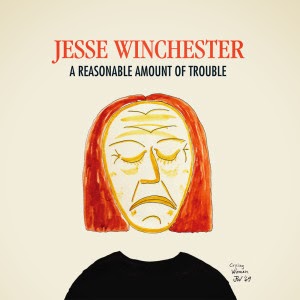 A Reasonable Amount Of Trouble is the final studio album by Jesse Winchester, who died in April of this year, from cancer. This CD is a group of songs he wrote while going through cancer treatment. But don’t worry, this isn’t a depressing album. It’s devoid of self-pity. In fact, there is joy here, and comfort, even humor. There are some really good songs here, and lyrics that stand out. For example, in “Ghosts,” I really like the line, “Oh, but I wish these ghosts would die.” Most of the tracks are original songs; there are just a few covers, some wonderful oldies.

Jesse Winchester is joined by some excellent musicians on this album. The band includes bass player Roscoe Beck, whom Leonard Cohen fans know well from his work with that singer/songwriter, and Jerry Douglas, who has played with… well, just about everybody. And the CD includes liner notes by both Jimmy Buffett and Mac McAnally.

“All That We Have Is Now”

The album opens with “All That We Have Is Now,” a song that delivers a great dose of old-time good vibes, a song that is full of joy. It’s a tune with a strong feeling of nostalgia, but without that sadness that often accompanies it. And I love the way the older style is used in combination with the line “All that we have is now.” This is a completely delightful song. “We must do this again sometime/But I can’t tell you when/But what a joy it’s been.”

Jesse Winchester follows that with a bluesy rock number, “She Makes It Easy Now,” a tune with some nice work on guitar. Jerry Douglas plays lap steel on this track. There is also a sense of humor to this song, with lines like “Two time loser, better watch your step/Because maybe marriage is out of your depth.”

“Neither Here Nor There”

“Neither Here Nor There” is a sweet, mellow song, and for me, is one of the best tracks of the album. “If I just made the whole thing up/I admit I’d had a cup/The part where I loved someone else/When I could only love myself/Let’s have a drink, let’s have a song.”

Another gem on this album is “A Little Louisiana,” a song which provides some damn good advice: “Take a little Louisiana with you everywhere you go.” And this: “So get your lovin’ while you can/It’s always good to have on hand.” This one is a fun bit of Cajun folk, and it features Stuart Duncan on fiddle and Joel Guzman on accordion.

“Never Forget To Boogie” is a playful, humorous song about being forgetful. Is it due to age, or is it a life-long characteristic? Well, it doesn’t matter, because, as the title suggests, he doesn’t forget to boogie, and that’s all that’s important. It’s sung in a kind of sweet way. “Going to see my baby, and I’m always late/Things in my icebox are way past their date… I’ve got to get on top of all this stuff/And it can’t be soon enough.” Joel Guzman plays accordion on this track. Jerry Douglas adds some wonderful touches on lap steel. And near the end, the song does stray a bit toward KC And The Sunshine Band territory, and totally works.

“Don’t Be Shy” is a fun, quirky love song that finds him fishing for compliments: “Now you may be thinking how I’m something else/For goodness sake, don’t keep it to yourself/And maybe you admire my wavy hair/Well, don’t you think that’s something you should share/Do you find me peachy keen/Are my eyes the nicest eyes you’ve ever seen?” You can’t help but love it. Plus, I love Roscoe Beck’s playful bass line on this track.

Covers include “Rhythm Of The Rain”

Jesse Winchester makes some interesting choices for the covers he does on this album. The first is “Rhythm Of The Rain,” written by John Gummoe and originally done by The Cascades. Jesse’s version is sweet and smooth. He definitely gives the song a new life. And the line “Pitter patter, pitter patter” always seemed cute to me.

He also delivers a loving rendition of “Devil Or Angel” that is wonderful. Jim Horn provides a nice lead on saxophone. This song was written by Blanche Carter, and originally recorded by The Clovers, and also by Bobby Vee.

For the final cover of the CD, he tackles another delightful oldie, “Whispering Bells,” written by Clarence E. Quick and Fred Lowry, and recorded by The Del Vikings. This track also features Jim Horn on saxophone. There are also some wonderful backing vocals.

A Reasonable Amount Of Trouble is scheduled to be released on September 16, 2014 through Appleseed Recordings.
Posted by Michael Doherty at 11:52 PM