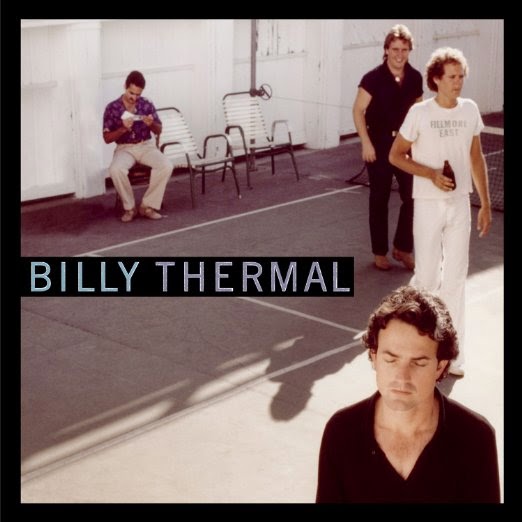 Sometimes music can come at exactly the right time. I was totally stressed out about work, trying to create my first call sheet for a production, and decided to pop in the Billy Thermal disc. And it immediately made me feel better. A nice combination of rock, punk and pop, it got me feeling looser, happier, had me laughing, even dancing around as I continued to work.

It’s interesting that this disc came at just the right time for me, because this is an album that should have been released more than thirty years ago. Billy Thermal is a band that was formed in 1978 by Billy Steinberg (the man who would later co-write “Like A Virgin” and “True Colors”). This album was recorded in early 1980, but not released, and within a year the band had broken up.

All of the songs were written or co-written by Billy Steinberg. Five of these tracks were released on a record in 1982; the others remained unreleased until now. The CD includes three bonus tracks, all demos. Also, there are liner notes by Billy Steinberg.

“I Tell You My Dream”

The album opens with “I Tell You My Dream,” an excellent rock tune with a good steady beat. I was just talking with someone the other day about this – about how rock music was so much fun at this time. I love the sound and feel of this track, particularly the chorus. And those delicious ya-yas give it an excellent summer feel, and some tasty guitar licks make this one of those perfect rock songs. Plus, it has some cool lyrics, like “I thought I was a schizo/I thought I was romantic” and “I think I could remember but I’m a little sleepy yet/There was a German Shepherd/He had a rabbit in his teeth.”

Linda Ronstadt covered “How Do I Make You” on her 1980 album Mad Love and as a single, and had a hit with it. This too has a fun rock vibe, and is also related to dreams, one line being “How do I make you dream about me?” In the liner notes for this release, Billy Steinberg mentions that he was seeing an analyst at the time, so perhaps that is why dreams were on his mind.

I really dig “Control.” It has a bit of a bouncy feel to it that is catchy, particularly on the chorus. And it has lyrics we can all relate to: “I lost control/You lost control.” I also like the line, “You had chemistry on your side.”

“Precious Time” is one that was covered by Pat Benatar. In fact, she used it as the title track for her 1981 release. This original version is actually a bit shorter than Pat Benatar’s rendition, not having that wild lead guitar section and the long ending. This song has a darker feel in the verses, with lyrics that fit the tone, opening with these lines: “I don’t want to argue about who was the victim/’Cause maybe we both got burned/I don’t want to talk about who was the traitor/’Cause both of our loyalties turned.” But the lines “I don’t want to hear about who was the winner/’Cause we both know it’s a tie” strike me as funny, and the chorus has a brighter pop feel, with a positive seize-the-day message.

“I’m Gonna Follow You” was also recorded by Pat Benatar, and included on her excellent 1980 LP, Crimes Of Passion. This is the one song on the album that Billy co-wrote, Ralph McCarthy being his collaborator on this track (though he wasn’t credited on the Pat Benatar record). This is such a cool tune. Here is a taste of the lyrics: “I’m gonna follow you ‘til I wear you down/I’m gonna follow you ‘cause this here’s my town/You don’t know these streets the way that I do/You can’t turn it on and off the way that I do.” It was included on a 1980 compilation titled Sharp Cuts – New Music From American Bands.

“I’m Your Baby” is one of my favorites. It’s totally fucking delightful, and that “Ooh” makes me smile every time. I really love the lyrics, with some lines standing out as humorous, such as “I would like to help you lose control” and “When you kiss me, your ruby lips leave a stain.”

“They Didn’t See It” is such a strange pop song, with lyrics that make me laugh out loud, like “The child was sweet just like Narcissus/There was a budding psychosis/But the parents’ eyes were out of focus.”

The CD contains three bonus tracks. The first, “Don’t Look At Me,” was covered by Rick Nelson (though in that version Rick sings, “Don’t look at me with those sad eyes”). It’s a seriously good rock song in which a man tries to get his girl to stop being jealous, to stop accusing him. “You got the whole world to fight with/You shouldn't fight with me.” And I love at the beginning how he sings, “I don’t care who said so,” then immediately asks, “Who said so? Spit it out.” Wonderful.

“Chez Metz” has a good vibe with a bit of a reggae thing happening (I like that work on bass), then mixed with a rock and roll drive. “I don’t know where everybody is now/Selling insurance or under the influence/We fell out of touch, it don’t matter that much.”

The CD’s final track, “Fa Fa Feelings,” is a bit goofy, but kind of catchy. And I like the line, “Too many buttons, baby, on your dress.”

Billy Thermal was released on August 12, 2014 through Omnivore Recordings.
Posted by Michael Doherty at 2:55 PM