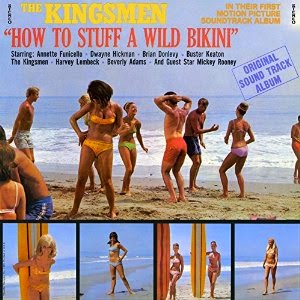 Recently a close friend got on a beach party movie kick, and I watched a few of those films with him, including Muscle Beach Party and even Ski Party (the latter includes a delightful performance by James Brown). But somehow I missed How To Stuff A Wild Bikini, which includes a performance by Buster Keaton (one of his last films), who shockingly was also in Beach Blanket Bingo and Pajama Party. These movies are actually a lot of fun, and of course a big part of that is the music. Now Real Gone Music has re-issued the soundtrack to How To Stuff A Wild Bikini, featuring a couple of tracks by The Kingsmen. All but one of the songs on this album were written by Guy Hemric and Jerry Styner. This CD issue features new liner notes by Tom Pickles, along with a few photos from the film.

The soundtrack to How To Stuff A Wild Bikini opens with the film’s title track, a goofy, feel-good, cheesy production featuring guys singing a girl’s measurements, but with an innocence and a total lack of anything indecent or uncouth. How is that even possible? I’m not sure, but they manage to pull it off. “Any girl will do as long as she is a 36-22-36/That’s how you stuff a wild bikini.”

“That’s What I Call A Healthy Girl”

“That’s What I Call A Healthy Girl” is a much better song, and is a lot of fun. Seriously, I found myself smiling like an idiot while listening to this. And there might have been a moment when I started doing the swim, but perhaps I shouldn’t admit that.

That song is followed by “If It’s Gonna Happen,” a sweet love song with female lead vocals by Lu Ann Simms. “Maybe the dream that I dreamed of, now it’s coming true/And baby, if I’m falling in love, I’m glad that it’s with you.” Sweet, right?

And for pure delightful silliness, check out “How About Us,” perhaps my favorite track on this CD. It features a bunch of girls singing lines like, “We got charm, we got looks/We got brains, we read books/We’re the chicks who know all the tricks/Hey now, how about us?” And it includes a bit with Mickey Rooney making his choice of chicks. It’s ridiculously fun. Mickey Rooney sings another fun tune, “Madison Avenue.” I especially love when the backing vocalists repeat, “Just how TV ought to be.”

Annette Funicello sings a couple of songs on this album, including “Better Be Ready.” She doesn’t have the greatest voice, but she has a certain charm and joy, and she uses those to her advantage, and to ours. “You better know the words to that familiar old song/Words that say till the end of time/I’ll be his and he’ll be mine.” Her second song is “The Perfect Boy,” in which she sings that “The perfect boy doesn’t have to be a movie star.” He “only has to be faithful to me.” It’s the backing vocals interacting with her that really make this song enjoyable.

The CD ends with two tracks by The Kingsmen. The first, “Give Her Lovin,’” is the only song not written by Guy Hemric and Jerry Styner. It was written by Lynn Easton, and is one of the album’s best tracks, a groovy and raw rock and roll tune. There is some seriously cool work on guitar here. The album wraps up with The Kingsmen tackling the film’s theme. It’s still totally cheesy, of course.

How To Stuff A Wild Bikini Original Soundtrack Album was released on July 29, 2014 through Real Gone Music.
Posted by Michael Doherty at 8:04 PM