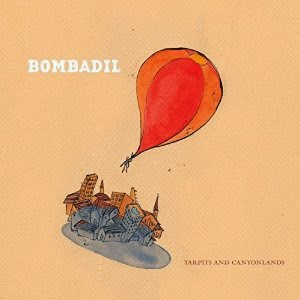 I was so impressed by Bombadil almost immediately upon popping in last year’s disc, Metrics Of Affection. That album was on my list of the best CDs of 2013 (actually #3 on that list). So I was seriously excited to hear anything else from this band. Their new album, Tarpits And Canyonlands, is actually an album that was originally released in 2009, but is now getting a second release on vinyl and CD. It’s a fantastic record.

I love the fearlessness of this band. These guys have their own peculiar perspective, and they seem to jump right in and not second-guess themselves. I love how they go it at every moment, with a gusto that is remarkable and admirable. What’s truly astounding is that with all the risks they take and all the directions they go, and all the things they try, there’s not a single misstep. And there is a delicious joy to what they’re doing. I just completely and utterly love this band.

Tarpits And Canyonlands features all original material. This is a band that certainly can write some damn good songs. One thing that strikes me about their lyrics is that they can be simultaneously humorous and deeply stirring. Like these lines from “Matthew”:  “Always kind of an ass, always making us laugh/I used to like looking into the past.”

Tarpits And Canyonlands opens with a delightfully quirky song, “I Am,” which builds from the repeated line, “Building you a pyramid,” adding more and more vocal parts until it reaches a great level, and creates an absolutely fantastic sound. It’s a short tune, but totally enjoyable. And we’re off to a great start.

That’s followed by “Sad Birthday,” an odd pop tune that has an undeniable energy. There is also a strange joy to the sound of this song, though the lyrics certainly aren’t that joyful: “Postman comes, a stack of bills between his thumbs just to throw away/Check your phone, there's just one message it's from home and they forgot to say/Happy birthday/Happy birthday to you.”

“Honeymoon” opens as a pretty folk tune, and then its surprising opening line, “Throw the body in the lake,” makes me laugh out loud. But this is not a silly song. There is something of a sense of humor, certainly, but there is a lot going on in this song, and it has something to say through that humor. “Blow the kiss you never felt/And belt your wife for smiling/Love is lying by yourself/Alone awake and crying.” I love the vocals. And there is some wonderful stuff on piano and strings. This song has some wonderful changes, and is ultimately quite moving. “Your life is hiding all the bad/In sad smiles that break you.” This is one of my favorite tracks, and is in fact one of the best songs I’ve heard this year.

The focus is on the vocals in “Reasons,” an oddly sweet song, with even a short a cappella section near the beginning. This unusual love song includes these lines: “And when we're the reason you must leave/Promise, girl, that you'll believe/yourself and not my stuttered pleas/for you to change your mind.” There is a nice acoustic guitar section toward the end of the song. This song is completely different from the previous track, except in as much as it’s an excellent song.

“Oto The Bear” reminds me a bit of Pete Townshend’s work with The Who. It’s an interesting and entertaining song, feeling like there’s a glorious circus wrapped entirely in its framework. This track lives and moves, rattling the cage of reality.

“So Many Ways To Die”

“Prologue” is a short instrumental track that slides right into “So Many Ways To Die.” “So Many Ways To Die” reminds me of Syd Barrett, particularly in the vocal approach to lines like, “You tell me all that you cherished is through/Well that's not true, it isn't true/It isn't true/I read it in the news, it is but really isn't you/You are exactly who you choose/You're only lying to you.” I love how the repeated strumming on the guitar creates a rhythm, while the drums actually do more interesting things, taking on a more interesting character. This is another highlight for me.

“Marriage” is an interesting song. I love the repetition of “In my past,” as he feels he has to stress that point in the line, “And then I blew your confidence on a lover that was in my past.” There are moments of this song that make me laugh (“Twenty years and the same kiss/And I thought you knew/This was marriage”), but it is also quite moving. These guys really have a knack for creating emotionally charged lyrics that are both depressing and humorous, mainly because they often feel so honest. Such as this line: “And then I hurt your dream job offer because I was scared.”

In another interesting turn, the group returns to the line “I am building you a pyramid” in the song “Pyramid.” Though it also has the line “Lost in the sand,” it’s not really a reprise of the first track. It has a totally different sound, but also ties things together.

Tarpits And Canyonlands ends with “Kate And Kelsey,” a strangely catchy acoustic song. I love these lines: “Love is a ruthless stare/That your brown hair does not hide.”

Tarpits And Canyonlands was released on June 24, 2014 on Ramseur Records.
Posted by Michael Doherty at 1:53 PM