Spanky And Our Gang: “The Complete Mercury Singles” (2014) CD Review 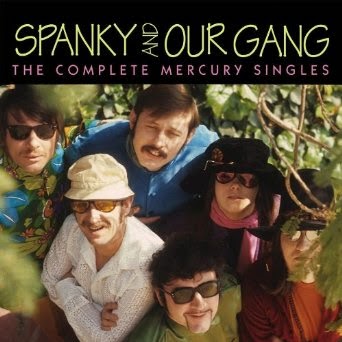 Spanky And Our Gang was a late-1960s folk-pop group led by Elaine “Spanky” McFarlane. They are known mainly for their hits “Sunday Will Never Be The Same,” “Lazy Day” and “Like To Get To Know You,” all of which are included on the new collection, The Complete Mercury Singles. This collection includes the flip sides, some of which are among my favorite tracks. These are mostly fun and sweet tunes, with nothing too serious, but there are several interesting and surprising tracks. The songs are presented in chronological order by release dates, and all songs are presented in their original mono single mixes. This collection includes liner notes by Ed Osborne.

The opening track is a bright, lively version of The Beatles’ “And Your Bird Can Sing.” This was the group’s first single, released in September of 1966. The other side of that single is a cover of “Sealed With A Kiss,” which was written by Gary Geld and Peter Udell, and was a hit for Brian Hyland.

“Sunday Will Never Be The Same”

“Sunday Will Never Be The Same” is one of those wonderful, sweet 1967 pop songs, and the band’s first (and biggest) hit, reaching #9 on the Billboard Hot 100. It’s one of those songs that feel like summer, and there is a joy to it that works every time I hear it, though the lyrics tell of a loss. Here is a taste of the lyrics: “I remember Sunday morning/I would meet him at the park/We’d walk together hand in hand/’Til it was almost dark/Now I wake up Sunday morning/Walk across the way to find/Nobody waiting for me/Sunday’s just another day.”

Their third single is another peppy, feel-good track, “Making Every Minute Count,” with lines like “Making every minute count/Making it groovy/Making love, making it now/If you know a better way of going/You know you’d better show me how.” It doesn’t quite work as well as the band’s previous single. This one reached #31 on the Billboard chart.

I actually prefer its flip side, “If You Could Only Be Me.” I really like Spanky’s vocal line on this one. And it’s a fun tune, written by Roger Atkins and Carl D’Errico.

“Lazy Day” was another big hit for the band, and another perfect summer song. It reached #14 on the Billboard Hot 100. This one really holds up. I can’t help but smile whenever I listen to it. “What a day for thinking right out loud, I love you.”

Its flip side, “(It Ain’t Necessarily) Byrd Avenue,” has some surprisingly silly lyrics, like “Here’s a prescription for convalescent hippies.” It’s quite an odd song, and I dig it.

The flip side to their next single is Fred Neil’s “Everybody’s Talkin’,” here titled “Echoes.” It’s a good rendition, and Malcolm Hale sings lead on this track. There is some interesting stuff in the brief instrumental section. It was released in December 1967, and so this version actually predates Harry Nilsson’s hit version. Two years later the song was remixed and released as “Everybody’s Talkin’,” the group’s final single. That is also included in this collection as the final track. Its flip side was “(It Ain’t Necessarily) Byrd Avenue,” and so isn’t included a second time on this disc.

Its flip side, “Three Ways From Tomorrow,” is also a really interesting song, and is actually one of my favorites from this collection. It has an odd, sort of playful vibe, with some surprises. It was written by Lefty Baker.

Lefty Baker also wrote “Yesterday’s Rain,” one of the strongest tracks included here. Spanky’s vocals at moments remind me of Grace Slick, with that sort of power and attitude. It’s a seriously good song, but somehow only reached #94 on the pop chart.

Another of my favorite tracks is “Mecca Flat Blues,” which was released as the flip side to “Anything You Choose.” Spanky’s vocals are absolutely fantastic. Seriously, you need to hear this track. It’s such a great bluesy jazz tune.

The Complete Mercury Singles was released on July 1, 2014 through Real Gone Music.

Posted by Michael Doherty at 9:55 PM