The Sweet Inspirations: “The Complete Atlantic Singles Plus” (2014) CD Review 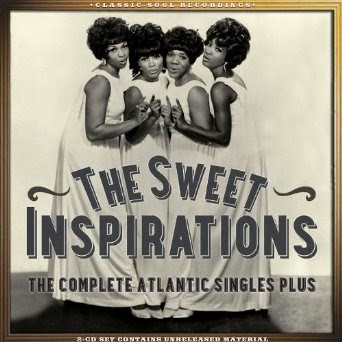 I love listening to the 1960s girl groups, and The Sweet Inspirations are particularly good, and have an interesting history. The Sweet Inspirations did session work, backing a lot of other artists, before they got the chance to record their own records. And during that early time, members included Dionne Warwick and Dee Dee Warwick. When Dionne left, her aunt, Emily “Cissy” Houston, replaced her. And when Dee Dee left to pursue her own career, she was replaced by Myrna Smith. And so the group, when they finally were able to record their own singles and albums, consisted of Cissy Houston, Myrna Smith, Estelle Brown and Sylvia Shemwell.

The Complete Atlantic Singles Plus features thirty-seven tracks on two CDs, and includes some previously unreleased material.  Beautiful vocals dominate these tracks. The flip sides to most of the singles are as good as the A sides (in some cases, even better). Most of the songs here are covers, but there are also some original tunes, including “Where Did It Go” and “Get A Little Order.” It’s a great collection, and includes relatively extensive liner notes by David Nathan. In general, I prefer the tracks on the first CD; sometimes the second CD strays into some cheesy territory, like on “Light Sings.”

“Why (Am I Treated So Bad),” the collection’s first track, opens with some absolutely beautiful blending of vocals over a cool, slow groove, and I’m mad for it immediately. And that low, sexy echo of “So bad” is perfect. This 1967 single reached #57 on the Billboard Hot 100, and #36 on the R&B chart. This is a delicious tune, written by Pops Staples.

That first single’s flip side, “I Don’t Want To Go On Without You,” is another slow gem, this one written by Jerry Wexler and Bert Berns (and recorded earlier by The Drifters). In addition to the wonderful vocals, there are nice instrumental sections featuring strings.

“When Something Is Wrong With My Baby”

The flip side to their second single was “When Something Is Wrong With My Baby,” a song that was a hit for Sam & Dave. The Sweet Inspirations’ version is full of heartfelt vocals, which rise beautifully above the sweet and simple music backing them. This song was written by Isaac Hayes and David Porter.

I love what The Sweet Inspirations do with the Otis Redding song “I’ve Been Loving You Too Long.” This track features such a strong lead vocal performance, and gorgeous backing vocals.

The vocals are even more impressive and delightful on “Oh! What A Fool I’ve Been,” one of the many highlights of this collection. I particularly love the way they blend during the verses. This track was written by Dan Penn, Spooner Oldham and Darryl Carter. That single’s flip side is a fun version of Wilson Pickett’s “Don’t Fight It.”

“Sweet Inspiration” is a fun track featuring excellent vocals, and also a nice mid-tempo groove. “I’ve got to have your sweet inspiration/You know, there just ain’t no telling what a satisfied woman might do.” Written by Penn and Oldham, this single was a big hit for the group, reaching #18 on the Billboard Hot 100, and #5 on the R&B Chart. “And I’ve got the power every hour of the day.” Oh, I don’t doubt it.

Its flip side, a cover of “I’m Blue,” is an absolute delight, mostly because of the fun stuff they do in the backing vocals. I could listen to this song all day.

“Where Did It Go”

“Where Did It Go” is an original tune written by Cissy Houston, and released as the flip side to their cover of the Bee Gees’ “To Love Somebody.” It’s an excellent tune, featuring a powerful lead vocal performance. Here is a taste of the lyrics: “We used to walk along, hand in hand/Thinking we were in a fairy land/And when you held me in your arms/Thrilled me with your charms/Tell me where did it go, where did it go, my love.” At the end, when she sings “I don’t know what I’ll do without you,” I believe her. And I can’t help but think the man would race back to her the moment he hears the song.

“Crying In The Rain”

The second disc opens with “Crying In The Rain,” their voices humming, sounding absolutely gorgeous. Then they blend on the song’s first lines, “I’m never gonna let you see/The way my broken heart is hurting me.” This is an absolutely wonderful rendition of the song written by Howard Greenfield and Carole King, and originally a hit for The Everly Brothers. In fact, I prefer this version by The Sweet Inspirations.

“Sweets For My Sweet”

The song title “Sweets For My Sweet” of course makes me think of Ophelia’s funeral (Gertrude says, “Sweets to the sweet” as she tosses the flowers). I prefer this group’s slower, more soulful material, for that is where they seem to most often shine. But they do a really good job with this more upbeat song, which was a hit for The Drifters in 1961. This was the title track for the group’s 1969 LP, as well as a single.

“Get A Little Order” is an original song, co-written by Cissy Houston and Sylvia Shemwell. This one has a bit more attitude. And, as expected, it features some excellent vocals. It was released as the flip side to “Sweets For My Sweet.”

Another fun track is “Them Boys,” which has a playful feel. It was written by Kenneth Gamble, Leon Huff and Roland Chambers.

The second is an interesting choice of songs for a medley, beginning with an odd, cheesy, slow song, “Little Green Apples.” It then eases into “Something,” my personal favorite Beatles song. They do a gorgeous rendition of it. Their voices are beautiful, and their rendition doesn’t need the strings. The transition then to “Think” is odd, with them whispering “Think about it, think about it, think about it, think about it,” before jumping into a nice, high-energy version of the Aretha Franklin song. It’s very cool, but I wish they just dropped the first song, and recorded “Something” and “Think” as two separate tracks, because The Sweet Inspirations certainly have some interesting thoughts on both of those tunes.

The final track a pretty rendition of "Make It Easy On Yourself," a song written by Burt Bacharach and Hal David.

Disc 1
Disc 2
The Complete Atlantic Singles Plus was released on June 3, 2014 through Real Gone Music.

Posted by Michael Doherty at 1:12 PM