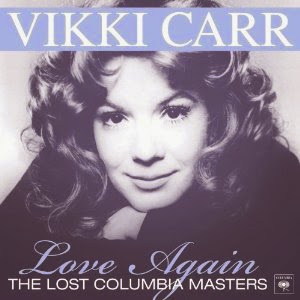 In June, Real Gone Music released Vikki Carr’s 1972 LP The First Time Ever (I Saw Your Face) on CD for the first time. That same date saw the release of Love Again – The Lost Columbia Masters, a CD of seventeen previously unreleased tracks, the first ten of which were recorded in September of 1975, when her contract with Columbia was ending. There are lots of country vibes to these tracks. There are some excellent songs here, especially “Lyin’ In My Arms,” “Ain’t It Worth The Price You Pay” and “The Night Life.” Filling out this collection are seven other unreleased tracks from the early 1970s, including the wonderful "Lovin' In My Soul."

The CD opens with “I Finally Got It Right This Time,” a song written by Larry Keith and Steve Pippin, and released by B.J. Thomas the same year that Vikki Carr recorded her version. This is a mix of country and pop elements, with Vikki Carr giving a kind of easy vocal delivery to this love song. “Oh, I got so good at losing love/That it came naturally/’Til your love put my losing to an end.”  Her rendition has a nice, bright vibe that I really like.

“Lyin’ In My Arms” is an interesting song, in that it mixes the sort of playful sounds of the harpsichord with Vikki’s intimate, heartfelt vocals. This is a slower tune, with sad tones. “And lyin’ in my arms/I find that you’ve been lyin’ in my arms/And morning always brings the naked truth/Oh, how I wish that fairy tales were true.” That leads to a really nice instrumental section. I really like this track a lot, and it’s one I appreciate more and more each time I listen to it. This song was written by Joe Allen.

“I Didn’t Get To Stay” is a cool song with some catchy moments on guitar and delicious vocals. She really dives into this one and gives it all this song could want. “I didn’t get to stay/But at least I got to go.”

Sure, the country tune “A Thing Called Sadness” is cheesy, but gloriously so. And I like the sort of weary quality to her vocals. It was written by Chuck Howard, and recorded earlier by both Ray Price and Bobby Vinton.

“Ain’t It Worth The Price You Pay”

“Ain’t It Worth The Price You Pay” is one of my favorites. It’s one of those slow gorgeous country songs, and Vikki Carr’s vocals are beautiful. “Ain’t it worth the price you pay to fall in love one more time?” Oh yes, absolutely! This is one of the highlights of the collection for me. What a shame this wasn’t released earlier, but I’m happy to be able to enjoy it now.

Vikki Carr delivers a very cool, late-night bluesy, jazzy rendition of Willie Nelson’s “The Night Life,” her vocals accompanied only by guitar. This track has a sound that is very loose, and kind of sexy, and features a fantastic vocal performance. This is perhaps the best track of the ten from 1975. The first time I had this CD on, my girlfriend called during this song, and she immediately asked who I was listening to. Even over the phone these vocals are impressive. That’s how good this track is.

Vikki Carr gives her own spin to Neil Young’s “I Believe In You.” It has a very different feel and tone. I prefer the original, of course, but they’re almost like two separate songs. This track was recorded in February of 1972.

Vikki Carr became known for her Spanish-language recordings, and this disc includes an early unreleased Spanish track, “Che Sera.” This is a gorgeous track, with a moving vocal performance. It was recorded in March of 1972.

“Lovin’ In My Soul” is another wonderful track, with beauty and spirit and positive vibes. Here is a taste of the lyrics: “My world is filled with joy/It’s filled with happiness and pleasure/All that it can hold/There’s lovin’ in my soul.” This track was recorded in December of 1970.

This collection is rounded out with another track recorded in December 1970, Vikki Carr’s version of “The End Of The World.” She begins it with a spoken word delivery of the first couple of lines.

Posted by Michael Doherty at 12:20 PM