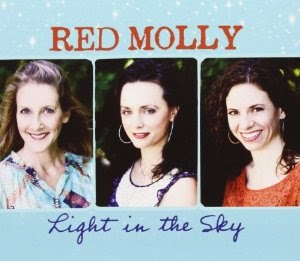 I’ve been listening to Red Molly a lot lately. The group’s most recent CD, The Red Album, features a lot of excellent original material, as well as a cover of the Richard Thompson song for which the band was named. Their previous release, Light In The Sky, contains more cover material, including songs by Gillian Welch, Doc Watson and Mark Erelli. They do a pretty and sweet rendition of Dolly Parton’s “Do I Ever Cross Your Mind,” as well as a wonderful rendition of Amy Speace’s “It’s Too Late To Call It A Night,” featuring Herb Gardner on altoon. There are only a few original tunes, but this is a group that is able to do a lot with its choices of covers, making the songs their own while not forgetting the spirit of the originals.

Light In The Sky opens with “Dear Someone,” delivered a cappella to show straight away the gorgeous qualities of their voices. It’s a beautiful way to open the album, and their rendition gives the song a delightful timeless quality. “Dear Someone” was written by Gillian Welch and David Rawlings.

They also cover Gillian Welch’s “By The Mark,” a gospel tune from her 1996 debut album, Revival. Red Molly's version is a more upbeat and lively take on the song.

Red Molly does an excellent cover of “Walk Beside Me,” a song written by Tim O’Brien and Darrell Scott. Red Molly delivers this song with an energy and passion. Again, it is the vocals that really drive the song, but there is also some wonderful work by Jake Armerding on both fiddle and mandolin. The original version appeared on Tim O’Brien and Darrell Scott’s 2005 release, Real Time.

“Come On In My Kitchen”

Red Molly does some interesting stuff with “Come On In My Kitchen,” the well-known Robert Johnson song. The vocals are at the fore, and they actually begin it a cappella. There is that blues base, but there are times when Red Molly strays from it (such as the way they do the “wind howls” part). It certainly has quite a different feel from the original, with a bit of a quicker tempo. There are some additional lyrics by Abbie Gardner, and they also toss in a bit of “It Hurts Me Too.” Herb Gardner plays organ on this track.

“Oh My Michael” is one of the album’s original songs, written by Abbie Gardner and Jonathan Byrd. It’s a slow, gorgeous tune. Abbie sings, “If I were a siren I’d call him ashore/And on the rocks I’d be lonely no more.” Ah, but the voices of these women would seem to have that very power. Plus, personally I’m happy to have such a beautiful song with my name in the title. I hope this one can establish itself in my brain to the point of finally evicting “Michael, Row Your Boat Ashore.”

“Hold It All” is another of this CD’s original songs, Molly Venter’s songwriting contribution to this album. It’s a beautiful song, with the voices at the fore and the guitar quietly behind them. “Trying to do what I can/Trying to be who I am/And I’m tired, I’m tired.” This is one that got right on top of me, and is one of my personal favorites. “God, I don’t know what to do with this love that I’ve tasted.”

The women of Red Molly are fans of Mark Erelli, having covered his song “Pretend” on their most recent release. And on this CD, they cover two of his songs. The first is “Ghost,” an incredibly moving song of loss and holding on to what is lost. Mark Erelli is a seriously talented songwriter, and Red Molly does a really good job with his material, getting right into the emotional center of “Ghost.” “And nobody answers when I call out your name/And I need you the most when you’re not around/I’m in love with your ghost.”

They also cover Mark Erelli’s “Why Should I Cry,” a fun, peppy tune about being lonely. Jake Armerding provides some wonderful touches on fiddle. Both of these songs were included on Mark Erelli's 2001 release, Compass And Companion.

The CD ends with a cover of “Fever,” a song I absolutely adore. It’s a song that you really can’t go wrong with, unless you’re Madonna (I still can’t get over how she completely missed the mark with her shitty rendition - someone please spank her for me). Red Molly’s version feels a bit faster than a lot of versions, but is still kind of sexy. Craig Akin is featured prominently on bass. (Is it just me, or are they singing "flame in you" instead of "flaming youth"?)