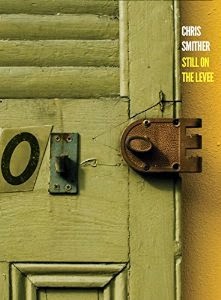 I first heard Chris Smither back when I got into folk music in the late 1980s. And then when I was a DJ in Oregon, Up On The Lowdown was released, and we used to play a lot from that disc. I knew he’d been around for a while, but I no idea just how long. His new two-disc set, Still On The Levee, celebrates fifty years of music. Fifty years. That’s incredible.

Still On The Levee is not a greatest hits compilation. In fact, it’s not really a compilation at all. Chris Smither has gone back to record new versions of some of his best material. It’s a celebration of his work, but is a look forward at the same time as being a look back, as these songs take on a new and fresh and different life.  This is folk and blues, and the age in his voice really adds another dimension and depth to these songs. For example, in “Rosalie” when he sings, “I’m walking along, I’ve been singing a song about Rosalie,” the age in his voice gives the impression that he’s been walking a long time, carrying the woman around in his head. And it seems the older you get, the better the blues work, the more they feel believable, real, lived. You know? Check out “Another Way To Find You,” for example. His vocals have an authority. I love the brutal, beautiful reality and honesty of this music. Nothing is overproduced. He also displays a wonderful humor in a song like “Lola” (with lines like “She says the love ain’t cheap, but the pain is free/And I say, ‘But that sounds good to me!’”).

Some good guests appear on these recordings as well, including Loudon Wainwright III, Allen Toussaint, Kris Delmhorst and Dana Colley. This excellent two-disc set includes a book, featuring the lyrics and lots of photographs.

Chris Smither gets things going with a sweet, even pretty rendition of “Devil Got Your Man.” There is a wonderful and appropriate weariness to Chris’ vocal delivery. It’s a voice of experience.  And adding to the song’s beauty is Anita Suhanin on backing vocals.

I love the sense of humor to “Don’t It Drag On.” The song has a sweet, relaxed vibe to it, and the humor kind of sneaks in through that straight-forward vocal delivery, lines like “I’m just a lazy man falling in love again/I got too much time to spare.” And the age (and wisdom) in his voice really adds another layer to this song. Originally it was the title track to his 1972 release. There is some nice work on harmonica on this track.

“Love You Like A Man” is a fun bluesy bit of bliss. “You’re coming home sad/You’re laying down to cry/What you need is a man to hold you/Not some fool to ask you why.” There’s a great strain in his voice. I love that moment when he goes from certainty to a more honest assessment in the line “I could – I think I could be your lover man.” It’s delightful and funny.

“Song For Susan” is one of my favorites. I find it so moving, the simplicity and honesty of it.  And with experience, he sings, “’Cause Love ain’t easy/Who told you that it would be.”  There is something heartbreaking about his delivery here. “’Cause someplace I know you need me.”

This album includes an absolutely wonderful rendition of “’Deed I Do.” This was one of my favorite songs from Up On The Lowdown. And this rendition on Still On The Levee features Catherine Norr on vocals. It has a sweet sadness to its sound. “Why does all this heartbreak call me lovingly?/How does it know how to open my door?” Chris Smither follows it with another tune from Up On The Lowdown, a slightly more stripped down version of the cool blues song “Link Of Chain,” with a nice little intro not featured in the original version.

The second disc kicks off with a great bluesy folk tune, “Hold On,” that has a beautiful back porch feel. It has a delicious vibe, in part because of the great work on harmonica by Jimmy Fitting. This is one of my favorite tracks. Here is a taste of the lyrics: “My freedom will be measured/By the length to which I’ll disobey/Tell me where to go/And I’ll freely tell you no/And I will hold on.”

He follows that with a cool slow blues tune, “Shillin’ For The Blues,” the original version of which was on his 2006 release Leave The Light On. Here Chris gets deliciously low and mean in his vocal approach. He sings, “I’ll say I ain’t surprised, my sense of humor’s paralyzed by the blues,” and a moment later, he delivers a deep repetition of “by the blues” that sounds so damn good. Making things even more interesting is the presence of Dana Colley on baritone sax.  This is definitely one of this CD’s highlights.

Another highlight is an excellent rendition of “What They Say,” featuring Loudon Wainwright III on vocals. There is a joy to this track, and a great loose vibe. Something that makes you feel you’re listening to friends sing and play, and you’re almost a part of it. This is a more recent song, included on 2012’s Hundred Dollar Valentine.

This disc also includes a really good version of “Up On The Lowdown,” the title track from his 1995 release. This version features some more good work on harmonica, and a good familiar feel to the instrumental sections.  There is also a playful aspect to the vocals, which I love. “It would shake a more suspicious mind/But I just like the sound.” And I love his delivery of “This simple secret is the key to my attraction.”

Interestingly, both discs end with a version of “Leave The Light On.” Both versions are really good, and both feature Rusty Belle, but each is quite different. The first has a nice, sweet, vibe, an almost happy feel to it. Chris Smither’s daughter, Robin, is featured on this track. The second version begins with Kate Lorenz on lead vocals, and has a kind of underlying intensity. Chris takes over lead vocals on the second verse: “I’ve never seen my life in such a hurry.” And later when their vocals blend, there is definitely a beauty. “I’ve been left for dead before, but I still fight on/Don’t wait up, leave the light on/I’ll be home soon.”

Posted by Michael Doherty at 8:25 PM