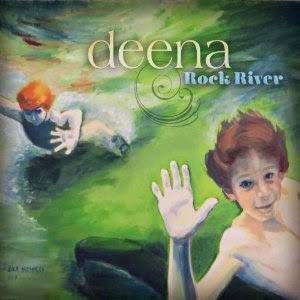 Certain artists and bands have an interesting way of coming back into my life. In the mid-1990s I was a radio DJ in Oregon and was turned onto a lot of great music. One album that we played a lot and which I loved was The Cucumbers’ Where We Sleep Tonight. It came out in 1994, and contains a lot of great tunes, including one that I put on several mix tapes (yes, tapes), a song called “Flies.” It’s a song that still works its way into my brain quite often, and sometimes I’ll find myself singing a few lines of it during my day, usually that line “Trees and other tall things move around, but not very much,” which has always made me smile. In fact, I was listening to it recently while I was in Boston, because the car I have access to there has a tape deck. Somehow after that album I lost track of the band.

But they continued to release music. And earlier this year singer/guitarist Deena Shoshkes released a solo album, Rock River, under the name Deena. It’s actually her second solo release, and is quite a bit different from what I’d heard from The Cucumbers, but just as delightful and interesting. One thing that really impressed me about that band was the vocals. And here Deena’s vocals continue to stand out and totally work for me. She has a voice that’s perfect for pop, and also perfect for country, and for folk, and on this album she mixes those musical genres to wonderful effect. All of the songs here are originals, written or co-written by Deena. And her husband and fellow Cucumbers member Jon Fried plays guitar and provides backing vocals on a few tracks, which is great.

Rock River opens with one of my favorite tracks, “My Own Advice.” It has a fun groove, and shows how great pop music can be when in the right hands. And it features a chorus that has elements of country: “If I could take my own advice/I might be sitting on sugar spice/Do it once and don’t think twice, oh yeah.” I totally dig the instrumental section, with nice work on keys and guitar. Jon Fried provides backing vocals on this track.

I love what Deena does vocally on “Find The Love.” She starts off sounding just adorable, singing about the love letters she has: “I've got the sweetest love letters from you/I believe every word you wrote me is true/Sometimes I take them out and read them to myself at night/When I'm feeling cold and I'm feeling I could use some light.” But she finds variations and changes, which keep this catchy tune interesting. For example, listen to the way she delivers these lines: “Tuesday's on and Monday's gone, long gone/Thursday's coming round, you know it won't be long.”

“Bring It All” is a sweet, somewhat mellow tune with country and folk elements. It features Rob Friedman on pedal steel and mandolin. I love the honesty and delight in Deena’s voice as she tells us, “Oh, I’m so ready for this.” “Bring It All” was co-written by Deena and David Graham. Jon Fried plays guitar and provides backing vocals on this track.

“Comes With Kisses” is so sweet, so pretty, with some wonderful lyrics. This early line caught me the first time I listened to it: “I just found out my heart/Thinks we’re in love.” How great is that? There is an innocence and youth to her voice, and so a vulnerability and also a hope, an optimism. This song then takes on another dimension as the bass and drums come in approximately halfway through. “Comes With Kisses” was co-written by Deena and David Graham.

Deena follows it with a fun pop song, “All She Wrote,” which has something of an early rock and roll vibe. There are great, brief a cappella moments as she ends certain stanzas. And how adorable she sounds on “Come and let me show you what I’m going to do,” a line delivered with a quiet and kind of sexy confidence. This is a song to get you on your feet, and it features Rebecca Turner and Elena Skye on backing vocals.

“My Friend Superman” is a somewhat silly song about Superman’s domestic life, and features a horn section. It was co-written by Deena and Chris Dickson. Jon Fried plays guitar and provides backing vocals.

“We’ll Take It From There” is a sweet, simple love song, with innocent and straightforward lyrics: “We could go to a restaurant/Or just sit and talk in a parking lot/I’d be happy anywhere/When you get here, we’ll take it from there/Where you are is where I want to be/‘Cause you are who I want to see/Anything we do will be fine with me if I’m with you.” She totally sells it. This track was co-written by Deena and Vaughan Daniel.

“Heart Full Of Now” is another favorite of mine. It has such a happy sound, the guitar reminding me at first a bit of Clan Dyken, those joyous sounds. This song lifts me up and sweeps aside any concerns and disappointments. It is unabashed pop of the absolute best kind. Here is a taste of the lyrics: “You’ve got me where you want me and there’s nothing I can do/Some invisible something is pulling me to you/It seems I’m going willingly, it seems there’s nothing stopping me/It seems there’s nothing stopping me/I felt you kissing me/What a sweet surprise coming over me/Because I didn’t ask, you see/And I’m all full of love.” It was co-written by Deena and David Graham.
I’m so happy that this talented singer/songwriter is back in my musical world, and I’m looking forward to hearing more from her. And now I need to go back and catch up on everything I’ve missed from her (and from The Cucumbers) in the past couple of decades.

Rock River was released on March 4, 2014 on Life Force Records.
Posted by Michael Doherty at 7:48 PM