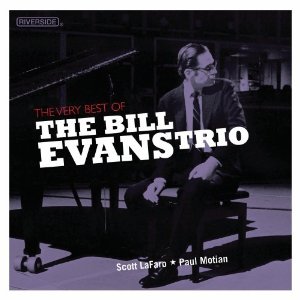 The Very Best Of The Bill Evans Trio a strange collection, in that it takes tracks from only four albums, two of which - Waltz For Debby and Explorations - have been rissued in the last couple of years (both with several bonus tracks). But of course the music is fantastic. This trio - Bill Evans on piano, Scott LaFaro on bass, and Paul Motian on drums - really put out some great music in the short time they were together (only eighteen months). Scott LaFaro, at only twenty-five, died in an automobile accident in 1961, putting an end to this group.

The Very Best Of The Bill Evans Trio opens with "Autumn Leaves," a delightful tune from Portrait In Jazz, the trio's first record. What I love about this group is that the bass and drums aren't just backing the piano. Right away in this collection you can hear they're on equal footing. There is an interesting conversation going on between piano and bass in this song.  And then there is a bass solo less than a minute in. There is nothing typical about the way this tune is structured. And it certainly comes in lively after that bass section. There is some truly wonderful work by Bill Evans on this tune. And there is another brief bass solo toward the end.

"How Deep Is The Ocean?"

"How Deep Is The Ocean?" is an Irving Berlin song that was originally included on the trio's Explorations. This song is pretty, and it's one that is really led by Bill Evans throughout.

"What Is This Thing Called Love?"

Evans, LaFaro and Motian seem to be having a blast (or at least a gas) on "What Is This Thing Called Love?" and as a result it's a lot of fun to listen to. There are surprises throughout, and great work by all three musicians, each adding a distinct voice. There are moments in Scott LaFaro's bass lead that are actually funny. And Paul Motian adds a brief, but cool drum solo.

Written by Cole Porter, "What Is This Thing Called Love?" is one of my favorites from this release. It was originally included on Portrait In Jazz.

A different version of "Blue In Green" appeared on Kind Of Blue. There is something gorgeous about this song. Though attributed to both Miles Davis and Bill Evans, Neil Tesser in the liner notes to this collection argues that it is much more Bill Evans' piece. Whoever wrote it, it's a great tune.

Two Miles Davis compositions appear in this collection: "Nardis" and "Solar." The first is from Explorations. The second is from Sunday At The Village Vanguard, and it closes out this collection. It's also the longest track on this disc (quite a bit longer than the original Davis version from Walkin') and is a really interesting composition, sounding a little more chaotic than the rest of the tracks at moments. It features more great work by Scott LaFaro on bass.

"Gloria's Step," written by bassist Scott LaFaro (his only composition in this collection) originally appeared on Sunday At The Village Vanguard, a live album recorded on June 25, 1961. As you might surmise, this track features some great work on bass, including an excellent lead section. But there is also a lot of wonderful stuff from Bill Evans and Paul Motian.

"Waltz For Debby," the title track from the trio's fourth and final album, was also recorded at that same performance on June 25, 1961. This is the only composition written by Bill Evans to be included in this collection, and it's one of my favorites. This is such a wonderful tune, and it raises my spirits whenever I listen to it.

Posted by Michael Doherty at 2:00 PM