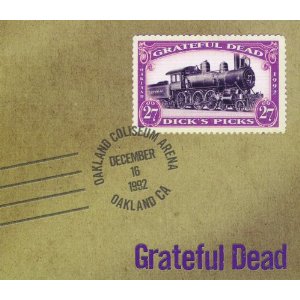 After concert promoter Bill Graham died in 1991, the Grateful Dead stopped performing their famous New Year's Eve shows. Their hearts weren't really into it without Bill Graham there to run things and ride in on a some wild contraption. Instead, they did a run of shows in early to mid-December at the Oakland Coliseum. So 1992 was the first year of that (there would only be two more, unfortunately, as Jerry Garcia died in August of 1995).  Dick's Picks Volume 27 contains the complete show the Grateful Dead on December 16, 1992. The third disc also contains four songs from the next night, including the encore of "Baba O'Riley" into "Tomorrow Never Knows."

The first disc is the first set the Grateful Dead played that night. The show kicks off with a pretty good version of "Feel Like A Stranger," a song I've always enjoyed. It was a good choice for a show opener because of the line, "You know it's going to get stranger, so let's get on with the show." That promise of things getting stranger was usually fulfilled, much to the fans' delight. And then the repeated line, "It's going to be a long, long crazy, crazy night." Which is just what we all wanted every time. Plus, the jam in this version has some interesting stuff.

They follow that with a pretty sweet version of "Brown-Eyed Women," then go into a low-down rendition of "The Same Thing." Sometimes it's great when Bob Weir dips into the blues, and this version has a nice little mean edge, which comes across in its slow tempo. Plus, there are some nice touches by Vince Welnick on keys.

"Loose Lucy" is such a deliciously fun and silly tune. And it's a good one to dance to, especially if you've a cute little thing next to you. Oh yeah, "Thank you for a real good time." Jerry Garcia always seems to get into this one, and you can certainly hear it in his vocals on this rendition. It's pretty awesome, and for me, it's the highlight of the first disc.

There is a weird sound during "Row Jimmy" at the 4:27 mark. Is it a random voice? Did someone come in early? It's strange. The band's vocals blend really well toward the end of this rendition.  The first set then ends with an energetic (if at times overly busy) version of "Let It Grow."

The second set opens with "Shakedown Street," and that first big chord makes the audience go nuts.  This is another that is always fun to dance to. This version isn't the best-sounding "Shakedown" I've ever heard (and I do miss Brent Mydland on those backing vocals - he had died two years earlier).  But the jam gets pretty groovy toward the end.

I love the drumming to begin "Samson And Delilah." This version has a great intro before kicking in.  From there they go into a pretty good version "Ship of Fools." I love the line, "And all that could not sink or swim was just left there to float."  In this version, Jerry sings "with fifty years upon my head." (He turned fifty earlier that year.)

The second set features a rousing rendition of "Playing In The Band" (though with one obvious fuck-up early on). Bob's vocals are excellent. He's really belting this one out. But it's the jam, of course, that is the real highlight of the song, and of the second disc. There is some pretty wild and unusual stuff here.  And that leads into a really good "Drums" segment. That attack at the beginning must have scared some of the folks who were tripping. And the drummers go into some really interesting areas, playing with silence at moments, pulling you in with pauses as much as with great rhythms. And then things get weird, leading nicely into "Space."  This section ("Playing" > "Drums" > "Space") is seriously good, and is probably one of the main reasons for this show being released.

The third disc begins with the end of "Space" before going into "Dark Star." Actually, it's only the second verse (they'd played the first verse a few days earlier).  Still, it's a really good version, reminding me at moments of some early versions of this tune.

After "All Along The Watchtower," they go into a gorgeous and moving "Stella Blue." This is one of my favorite songs, and once at Shoreline it had me (and everyone around me) in tears. It's that kind of song. Jerry really shines on this one, and it is one of the highlights of the show. Just wonderful. I only wish Bob Weir hadn't come in so early with "Good Lovin'," that he'd allowed "Stella Blue" to actually end properly. Though it's a seriously fun version of "Good Lovin'," and Bob gets really into it.  The encore is "Casey Jones," and the audience goes a little bonkers. That's because the band only started playing this tune six months earlier after not doing it for eight years. Plus, it's such a fun tune, and this version is great.

The filler is from the end of the next night's show. Is it me, or is there something oddly relaxed or subdued about this version of "Throwing Stones"? I love Bob's delivery on the repeated "on our own." Perfect. That goes into a nice, energetic rendition of "Not Fade Away." The jam is powerful.  Vince Welnick gets to shine on the encore, which is The Who's "Baba O'Riley" into The Beatles' "Tomorrow Never Knows."  It's pretty wild, and there is a little nod to Talking Heads at the end.


Posted by Michael Doherty at 4:32 PM