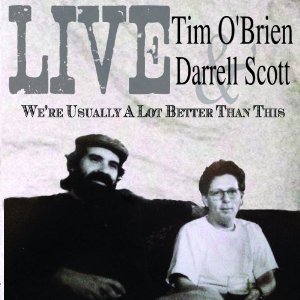 Tim O'Brien & Darrell Scott's new CD, We're Usually A Lot Better Than This, is a live album with tracks from two different concerts, one in 2005 and one in 2006. These were shows performed at The Grey Eagle in Asheville, North Carolina. Both concerts were benefits for The Arthur Morgan School (they each had children attending at the time). This is their second album together. The first was a studio album titled Real Time, which was released in 2000.

If their names sound familiar, but you can't quite place them, Darrell Scott has performed with Steve Earle, Sam Bush, Guy Clark, and Robert Plant, among others. Tim O'Brien has played with Mark Knopfler, Steve Martin and Steve Earle, and has also released more than a dozen solo albums. He also won a Grammy in 2005.

Their new live album features some originals, as well as some covers. I'm a big Gordon Lightfoot fan, and these two do a really nice job on one of Lightfoot's prettiest tunes, "Early Morning Rain." They also do an impressive a cappella rendition of "House Of Gold," a Hank Williams tune.  Yet, as excellent as their vocals are, it's often the instrumental sections that really excite me (and the audience as well, judging by its audible reaction to those sections).

This is a really good folk album, and these guys clearly need to do more recordings together.  By the way, the album's title comes from a comment they make just before "Mick Ryan's Lament": "I wanted to tell you all we're usually a lot better than this."

"Climbing Up A Mountain"

We're Usually A Lot Better Than This opens with "Climbing Up A Mountain," a great, bright bluegrass tune written by Tim O'Brien.  The vocals sound great, with lots of energy, noticeable right from the song's opening line, "I've been climbing up a mountain since the day that I was born." And they sing how they're "tired and worn," but they certainly don't sound it. Their playing is brisk and engaging. And despite the song's initial description of a struggle, the song is positive, with lines like, "Just listen to your heart to hear what you need to know." "Climbing Up A Mountain" is a great opening track.

I've always loved "White Freightliner Blues" (and I was fortunate to see Townes Van Zandt perform live once).  I've heard a lot of folks cover this one over the years, and Tim O'Brien and Darrell Scott do a really good version. It has a tough edge to it that really works. This rendition is pretty intense (seriously), and is one of the disc's many highlights.

"With A Memory Like Mine" is a really good song that Darrell Scott co-wrote with his father. He explains it at the beginning of the track, that the song has his father's lyrics, but that he added the last verse. Here is a taste of the lyrics: "I watched him leave that Friday morning/It was in the month of May/I told my son to be a good soldier/But return again some day/He did return just one year later/Lord, I'll not forget that day/The baggage car is where he traveled/In a casket where he lay/Train man, keep your whistle blowing/Make it moan and make it whine/You make a man feel mighty lonesome/With a memory like mine." This track features some really nice work on banjo. I'm particularly fond of the instrumental section, which has the feel of a jam.

"Long Time Gone" is another original by Darrell Scott, and this one too has a really cool instrumental section. Two, actually. This song also has a bit of a pop feel, and it's one that I like more and more each time I listen to it. I love the bit about what artists are being played on the radio: "We listen to the radio to hear what's cookin'/But the music ain't got no soul/They sound tired, but they don't sound Haggard/They've got Money, but they don't have Cash/They've got Junior, but they don't have Hank."  Great, right?

"With A Memory Like Mine" and "Long Time Gone" were both on Real Time.

This collection also features Darrell Scott's "The Hummingbird," a song about a guitar. This one is also related to his father, and he talks about that in the song's introduction.

"When There's No One Around/Will The Circle Be Unbroken"

This album ends with "When There's No One Around," a song that Tim O'Brien and Darrell Scott wrote, and that Garth Brooks covered. I really love this song. Here is a taste of the lyrics: "Now this is a man that nobody sees/He wears my old clothes/He looks just like me/And if he'd learn how to fly, he'd never touch down/It's the man I am when there's no one around." This is another in the long list of songs that take place at four in the morning.  They then go right into "Will The Circle Be Unbroken," that wonderful ever-reliable folk tune.

CD Track List
We're Usually A Lot Better Than This is scheduled to be released October 9, 2012 on Full Light Records.

Posted by Michael Doherty at 6:23 PM