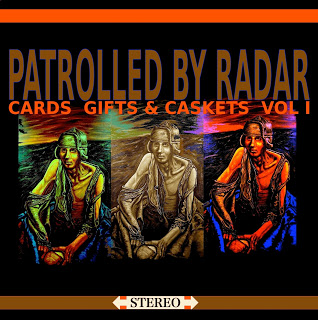 Patrolled By Radar's new album, Cards Gifts & Caskets Vol. 1, is an album of covers. There is a wide range of material presented here, including blues, punk, 1960s rock and pop. In most cases, Patrolled By Radar is pretty faithful to the original feel and tone (though still making the songs their own). A lot of these songs have a humorous element to them.  Obviously a tune like "I Like You" is delightfully silly.  But, for example, The Kinks song has the line, "Since you joined the upper class you don't know us anymore," which I think is really funny. And "A Song From Under The Floorboards" (a song originally recorded by Magazine, then covered by Morrissey) has the line, "I know the meaning of life, it doesn't help me a bit."  So the choice of songs helps showcase this band's sense of humor. Not that these are novelty songs - they aren't. And they're also not making fun of any of the songs. These are all earnest renditions.

This band is really talented, and clearly these guys enjoy themselves. Their love of music is so present in each track that you will be even more of a music-lover yourself after listening to this album. This is a band that I've been enjoying for a while now. They were originally called 50 Cent Haircut. Then last year they released a CD titled Be Happy, featuring all original material written by Jay Souza. It's interesting that an album of covers could make me love this band even more than I already did.

"Goin' To The River"

They open Cards Gifts & Caskets Vol. 1 with "Goin' To The River," that cool blues rock tune, and this is an excellent rendition. The vocals lend themselves perfectly to this type of song, and the electric guitar licks have a certain early rock feel to them which is great.  August Poehls joins the band on tenor saxophone for this one

The harmonica sets the tone immediately with its slow, sad, sustained notes, in this country version of "Hateful," a song written by Joe Strummer and Mick Jones. That's right, a country version of a song by The Clash. And oddly, it totally works. The band definitely reminds me of Cracker on this one. Here is a taste of the lyrics (for those unfamiliar with the song): "Anything I want, he gives it to me/Anything I want, he gives it, but not for free/It's hateful, but it's paid for/And I'm so grateful to be nowhere." "Hateful" originally appeared on London Calling.

"Talking 'Bout That Girl" is a seriously cool song, with that fantastic late '60s rock feel. Krister Axel plays Hammond on this track.

"Eager Boy" is a fun rockabilly tune written by L.C. Pratt Jr. (and originally recorded by The Lonesome Drifter).  Here is a taste of the lyrics: "Well, I know I'm young/I know I'm right/I'd like to help the weary ones to see the light/I don't believe this world will pass us by/I know we can succeed if we only try."  Some really fantastic work on guitar helps to make this one of my favorite tracks.

"I Like You" is an odd little gem written and originally performed by Alan Arkin. It's a silly and wonderful lounge-type tune, and Patrolled By Radar performs it as a duet. The presence of female vocalist Nicole Gordon makes it more of a sweet love song, like a delightful running joke between a couple. Nicole Gordon takes the lead first: "I like you 'cause you don't make me nervous/I've not met anyone like you before/Except maybe once or twice/Once or twice, but not very recently." I really dig the way their voices blend on "I'm glad I'm not walking on air/And there are no trumpets blowing in my ear/I'm not saying to myself, Get a hold of myself/And I don't get a rash when you're near."  I absolutely love this track. Krister Axel plays piano on this one.

I've been a huge fan of The Kinks since I was a child. Patrolled By Radar does a really good job on their song "Rosie Won't You Please Come Home" (from their 1966 album Face To Face). Kevin Lacey plays bowed bass on this track.

"Amplifier" is a great song written by Peter Holsapple (and recorded by The dBs). The song is oddly catchy, considering the opening lines are "Danny went home and killed himself last night/She had taken everything, she had taken everything." I really dig Patrolled By Radar's take on this tune, particularly on the "Well, an amplifier is just wood and wire" bit.  Man, these lyrics kill me: "She took everything he thought he liked/And what she couldn't take, she found a way to break/She left his amplifier."

"I Love How You Love Me"

"I Love How You Love Me" might be the most surprising cover on the album. I've always had a bit of a weakness for this song. There might be a bit of humor in this choice of song, but, as I mentioned earlier, they really play it - they're not poking fun here. Though there is some humor inherent in the line, "I love how you think of me without being told to."  I particularly dig the way Patrolled By Radar do the instrumental section toward the end.

"I Love How You Love Me" was written by Barry Mann and Larry Kolber. The Paris Sisters had a hit with it in 1961.

Patrolled By Radar concludes this album with "Outta Place," a cool sort of punk song written by John Felice (and originally performed by The Real Kids).  The opening lines are "I should have known/I should have stayed at home/You insist we go through it again/I ain't no actor when I try to pretend that I like your friends/'Cause I hate your friends."

Cards Gifts & Caskets Vol. 1 is available as a download (for free - though the band accepts donations) on the band's website.
Posted by Michael Doherty at 4:34 PM