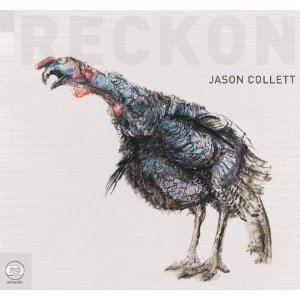 Canadian singer/songwriter Jason Collett's new CD, Reckon, is an interesting blend of acoustic and pop tunes. It begins with a wonderfully sad sort of acoustic love song, but is definitely not confined by any preconception or rule of what constitutes "folk music."

Several of the songs on this album are political in nature, but are not preachy. And though timely, these songs likely won't feel dated in any anticipated future.  You can hear a lot of different influences in his approach to music, and the way he addresses or tackles a subject.  And though Jason Collett has cited Bob Dylan as an influence, none of these songs have that sort of rambling storyteller aspect, and none of them have the length of some of the well-known Bob Dylans tunes.  In fact, most of these tracks are pretty short, timing at around two minutes.

Reckon opens with "Pacific Blue." This song's guitar intro is truly pretty, and this is a gorgeous and sad song about not being able to get over someone. The first line, "I left Toronto in the rain/Landed in Vancouver in the rain," sets the tone, but the lines I really love are "Starting over was our first mistake/Getting free was a chance we didn't take/I should never have hesitated/Getting over you."

I've said it before, but I have a serious weakness for cello, and "Jasper Johns' Flag" makes interesting use of that instrument. That's Alex McMaster on cello. The song also benefits from the presence of violin and viola. "Jasper Johns' Flag" is kind of a strange song, with an interesting change just before the end. This is one of the many short songs on this album, at just over two minutes.

"King James Rag" is a more upbeat tune. It reminds me of some of the stuff John Lennon was doing in the last couple of years of his life. That is, the sound and feel of the song, not the lyrics, which are an odd collection of cliched phrases like "The salt of the Earth" and "The apple of your eye." It's a happy pop song, and even has some "la la la la" fun to it. This is another short song.

"You're Not The One And Only Lonely One"

"You're Not The One And Only Lonely One" is closer to a dance song, with its good and prominent groove, and that instrumental section, leading to a brief moment with just vocals and percussion.

"Talk Radio" is an interesting, brief look at patriotic person for whom things have suddenly gone wrong. It's an acoustic song, with a simple, repeated bit on guitar. The first line is, "What is happening to me/I had done all the right things." This is one of the more political songs on this release. That is to say, it has social relevance.

According to the liner notes, "Talk radio" is a paraphrased excerpt from an interview with Noam Chomsky conducted by Chris Hedges.

"I Wanna Rob A Bank"

"Talk Radio" goes right into "I Wanna Rob A Bank," and the sudden change grabs your attention because perhaps just for a moment it seems to be the same song, going in a different direction.

"I Wanna Rob A Bank" also reminds me a bit of John Lennon (except for the chorus). This one is also about the current economic troubles (and so is political). This song is seriously catchy, and is one of my favorite tracks.  In this one, he sings, "I want to fill my tank/I just want to fill my tank."

"Song Of The Silver-Haired Hippie"

"Song Of The Silver-Haired Hippie" is an acoustic tune that I love.  It's beautiful, and really sinks its teeth into you.  And then just when I feared it would end prematurely (around two and a half minutes), it kicked in with more force. This is a wonderful song.

"Song Of The Silver-Haired Hippie" is a poem by Damian Rogers, which Jason Collett set to music. The poem appeared in Damian Rogers' book Paper Radio.

"My Daddy Was A Rock 'n' Roller" reminds me of early 1970s David Bowie, particularly the vocal patterns. Here is a taste of the lyrics: "He dodged the war 'cause he was nobody's soldier/Settled down here just north of the border/A union man 'til the company sold her/My daddy was a rock 'n' roller." This song also has a reference to Jerry Orbach's character on Law & Order.

"Don't Let The Truth Get To You"

"When The War Came Home"

This album concludes with another political and social song, "When The War Came Home." This one also reminds me of John Lennon, especially with its simple drum beat. This song also features cello, violin and viola.  Here is a bit of the lyrics: "All that tough talk fight for our freedom/Never did stand to reason/The war left us broke/When the war came home."

Reckon was released on September 25, 2012 through Arts & Crafts Productions.
Posted by Michael Doherty at 3:45 PM