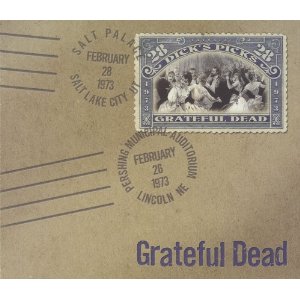 The Grateful Dead were able to tap into some magical realm more often than any other rock band, and in 1973 they basically resided there. For some reason, the shows they did that year were phenomenal. They stretched out, took lots of chances, and played their fucking hearts out.  Dick's Picks Volume 28 features two concerts from that fantastic year (though some songs are missing from the first set of the first show, and it seems at least one song is missing from the second show).  This set includes four discs featuring two excellent versions of "Eyes Of The World," one of my favorites, and a song that was particularly delicious that year. There are also two wonderful versions of "They Love Each Other." Both "Eyes Of The World" and "They Love Each Other" in 1973 had additional sections that were later dropped.  A lot of the songs they played at these shows were relatively new, including a seriously fun version of "Loose Lucy" (which would appear on the following year's studio release, From The Mars Hotel).

The first disc opens with "Promised Land," that great Chuck Berry rock and roll number. And this is a good, energetic rendition. The follow it up with "Loser," and this is an unusually powerful version of this song. Listen especially when the vocals come back in - holy moly!  The first disc also features a sweet, soft, pretty version of "Looks Like Rain." Certain lines have always done it for me: "I'll still sing you love songs written in the letters of your name" and "I only want to hold you/I don't want to tie you down/Or fence you in the lines I might have drawn." Beautiful.  There is also an early "Loose Lucy," which they debuted just two weeks earlier. Check out Jerry Garcia's "Woo" in the middle of a line, and then Donna's backing "round and round."  It's got a great groove, and Jerry has fun with this number. This is just wonderful, one of the disc's highlights.

The other highlight is the first set closer, "Playing In The Band."  Oh yes, a 1970s "Playing" means a lot of energy and a great jam and Donna screaming. You can't beat it. And the jam in this version starts off full throttle - no fucking around - and when it eases up (only slightly), things get even more interesting. Light a few candles, have a drink or smoke a bowl, and get loose with this great "Playing."

The second set opens with a groovy, bouncy "They Love Each Other." And this is when there was that extra section to the song that was dropped later.  There is also a very cool rendition of "Tennessee Jed."

The second disc continues with the second set of the first show, beginning with a pretty good version of "Greatest Story Ever Told," with some great energy during the jam. But it's what follows that really makes this disc special. A very cool twenty-five minute "Dark Star" that starts off nice and easy, but with various members pushing it at times, particularly Phil at one moment. But it eases back, as they let the song decide where it will go. And soon they're all heading in one direction. But almost as soon as the jam finds a groove, they dispense with it, let it go, searching for Something Else. Keep the form loose, and let the magic happen. Things get very quiet, the song almost disappearing, but Phil leads it back with a steady rhythm on bass. Jerry and then Keith play over it. And the band finds a great jazz groove. Absolutely wonderful, and definitely magic. Then sixteen and a half minutes in, Jerry draws everyone back to the song's main theme. And a minute later they start the first verse.  I love "Dark Star" from this time because they really play with silence within the verse.  After the first verse, the song seems to be ending for a moment, but really they're just going into more spacey territory.  It may sound ridiculous, but at twenty-five minutes, this "Dark Star" is too short. It's clearly not finished.

But then Jerry eases into "Eyes Of The World," one of my favorites. "Sometimes we walk alone/Sometimes the song that we hear are just songs of our own." This song always makes me so happy, and even in the long jam they keep that great groove. And this version has an excellent and lengthy jam (this track is 19 minutes). Around 14:15 they go into that other section (it's a bit more tentative than some versions, but once they're there, they're there - you know?).  There is also a really great "Goin' Down The Road Feeling Bad" on this disc.

The second show opens with "Cold Rain And Snow," which I always thought a good tune to kick off a show, with its opening lines, "I married me a wife/She's been trouble all my life/Run me out in the cold rain and snow."  This is a somewhat relaxed version. The band picks up the pace with a quick "Beat It On Down The Line" - only three beats to start it.  And then there is another very groovy, fun version of "They Love Each Other" (again, with that extra section). This is really an excellent version. The good-time vibes continue with "Mexicali Blues." After a good version of "Sugaree," it's time to enter the Phil Zone for "Box Of Rain." It's strange hearing Donna sing backing vocals on this one, and there is that odd stop on "Feel your way," which doesn't quite work. I love this song, but the way they were performing it at this time seems off.

The real highlight of the third disc is "He's Gone." The meaning of this song has changed over the years, but at the time of this show Pigpen's absence must have been felt. (He was seriously ill at the time of this show, and was dead a week later. The liner notes list him among the band members as being "In Spirit.")  This is a great version, though on this one I could do with Donna's random wail. It seems totally out of place, coming as it does after "Going where the wind don't blow so strange." I love the vocal section toward the end of the song - it's always good, but this time there is something really sweet about it. I dig Keith's work on piano during that section. And Donna sounds beautiful. Everything is perfect.

They follow that with a good rendition of "Jack Straw," another that was a favorite of many Deadheads.  The second set begins on this disc, with Robert Hunter's most straight-forward description of an acid trip, "China Cat Sunflower," leading into a good, energetic rendition of "I Know You Rider."

The final disc of this set opens with a sweet version of "Row Jimmy." Things then kick into gear with "Truckin.'" This is when the band starts cooking. The beginning of the jam is straight-ahead balls-to-the-wall rock and roll. And they don't really let up much. Phil Lesh gives some indications early of wanting to go into "The Other One" and there is some great play between him and Bill Kreutzmann.

And then suddenly we get that great pounding intro to "The Other One." Holy moly! The bloody electricity of the band at this moment is incredible. The faster we go, the rounder we get indeed! Jerry reaches higher, and after a peak, the band brings it down for a bit, mostly to allow it to build again. This song is often best when it's a ferocious unpredictable beast, and it is such a monster here. They go into a verse around seven minutes in, and then the jam gets a bit more strange and wonderful. I have to imagine more than one mind was blown during this show.

And then the song eases into "Eyes Of The World." I know I've already said it, but this is such a wonderful song, and always gets me dancing. That other section comes in around 14:15 again (that's pretty weird, isn't it?).  "Eyes" leads into a glorious rendition of "Morning Dew." I love it when Jerry really goes for it vocally, as he does on this song. I also love how the song then gets so quiet on "I guess it doesn't matter anyway." Beautiful.  And then, of course, there is that powerful ending. Holy shit, listen to Jerry's guitar.

Then there is an energetic "Sugar Magnolia," with a long pause before "Sunshine Daydream." The album wraps up with a pretty a cappella version of "We Bid You Goodnight."

Posted by Michael Doherty at 2:08 PM