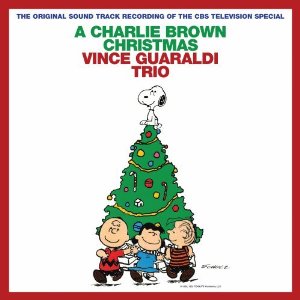 A Charlie Brown Christmas is the best Christmas special ever made, and one of the main reasons for its lasting appeal is the wonderful music by Vince Guaraldi. It's what makes me love that special and want to see it every year. And I'm always happy to hear this music on the radio during the holiday season (How many Christmas tunes can you say that about?).

The tracks have been remastered for this special re-issue. And there are new liner notes by Derrick Bang, author of Vince Guaraldi At The Piano. The liner notes also include a Peanuts comic strip used to advertise the special in TV Guide.  This CD has three bonus tracks that were not included on the original vinyl release.

A Charlie Brown Christmas begins with Vince Guaraldi's arrangement of the traditional Christmas tune "O Tannenbaum." This is by far the best rendition I've ever heard of the song. It begins with a truly pretty piano solo of the song's main theme. And then the song takes on a cool jazz groove, while retaining the piano's beauty from the opening moments. Vince Guaraldi certainly makes this song his own, and in doing so greatly improves upon it. And I dig that great work on bass.

"Linus And Lucy" is that great famous Peanuts theme, a composition that brings a big smile to my face every time I hear it. This song was also included on The Very Best Of Vince Guaraldi, released just two months ago. This is one of those songs that is so good, it feels like its existence has made the world a better place. And don't try to pretend that you don't do those silly Peanuts dances when you hear it.

"Linus And Lucy" is followed by "Christmas Time Is Here," the other famous theme from A Charlie Brown Christmas, this one being that slower, sadder, gorgeous tune. When people talk about the peaceful feeling of Christmas, I always think of this song. Because for me Christmas always seems to be a stressful time, and this song is the one thing related to the holiday that really does have a calming effect. It's the one indication or glimpse of that peace that is often spoken of. It has a special warmth that really affects me every time I hear it.  "Christmas Time Is Here" was also included on The Very Best Of Vince Guaraldi. This song features more wonderful work on bass.

The CD also has the version with the vocals, sung by St. Paul's Church Choir. This is a much shorter version, but of course just as gorgeous and wonderful.

There are three bonus tracks on the CD. The first, "Greensleeves," is a longer take with some wonderful work by Vince Guaraldi on piano.  And then the album ends with Peanut themes from two other holidays. Those songs are "Great Pumpkin Waltz" and "Thanksgiving Theme."

CD Track List
A Charlie Brown Christmas is scheduled to be released on October 9, 2012 through Concord Music Group.

Posted by Michael Doherty at 9:39 PM