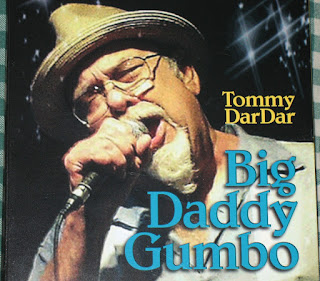 Blues vocalist and harmonica player Tommy Dardar released his album Fool For Love in 1999 (it was later re-released as Blues Fool in 2008), then a couple of years later began recording his follow-up. Nine tracks were recorded in 2001, but were left unfinished and unreleased. Following Tommy Dardar’s death in July of 2017, several musicians were brought in to finish the album, at that point a labor of love. And now, at last, we have Big Daddy Gumbo, a seriously fun and enjoyable CD, and testament to Dardar’s talent and joy. It features a couple of songs that Dardar wrote, along with several written by bandmates Johnny Lee Schell and Jon Cleary. The core band on the original recordings, by the way, is made up of Tony Braunagel on drums, Hutch Hutchinson on bass, Jon Cleary on piano and Johnny Lee Schell on guitar. Joining them are Mike Finnigan on organ, Barry Seelen on organ, Joe Sublett on saxophone and Jimmie Rose on percussion, as well as Teresa James, Tommie Lee Bradley, Larry Fulcher and Terry Wilson on backing vocals. (You might recognize several of the names as members of Teresa James And The Rhythm Tramps.) Proceeds from this album will go to Dardar’s family.

The album opens with “It’s Good To Be King,” written by Johnny Lee Schell. This is blues, but with a great raw celebratory air, particularly in Tommy Dardar’s vocal delivery. “I’d have a pretty princess even when I’m old/Make everybody round me do just what they’re told/I’d have a funny jester make me laugh and sing/Hey lawdy lawdy, you know that it’s good to be king.” It’s a rockin’ blues number that gets things off to a wonderful start. And check out that piano. That’s followed by “Headed Down To Houma,” a deliciously fun number written by Tommy Dardar. Oh yes, let go of our troubles and just enjoy this New Orleans-flavored music. “Oh, it’s been a mighty long, long time/Since I danced and twirled/A little Cajun girl/And joined that second line.” A second line is that group of folks that follows a band in a street parade, joining in the fun. And this song has that same lively, merry vibe.

“Baby I Can Tell You” is a strong, straightforward blues number written by Johnny Lee Schell, featuring some wonderful work on harmonica as well good backing vocals. “Well, I can tell by the way you kiss me/Things are going to work out fine/And I can tell by the way you hold me/In the middle of the night.” Then the drums announce that “C’mon Second Line” will be another joyful, fun party tune, and indeed it is. The lyrics not only mention Mardi Gras, but also contain a reference to “Iko Iko.” And I love the piano part. “C’mon Second Line” was written by Jon Cleary and originally included on his album Alligator Lips And Dirty Rice. That’s followed by another song written by Jon Clearly, “Let’s Both Go Back To New Orleans,” which has a great early rock and roll vibe. I’m a total sucker for this sound, this rhythm. Plus, I love the vocal performance. This one too mentions Mardi Gras. “Take me back to New Orleans/Where I want to be.” And this track features more cool work on piano, particularly toward the end. “In My Mind” also has a classic vibe, but is a slower, stirring number. “Now there’s another man/I see him hold you tight/The only time I hold you/Is in my dreams at night.” This song, written by Tommy Dardar, is another of this disc’s highlights.

“Shake A Leg” is another fun number, this one written by Terry Wilson and included on Teresa James And The Rhythm Tramps’ Live. It features more good work on harmonica. The album then concludes with its title track, “Big Daddy Gumbo,” written by Johnny Lee Schell and featuring some delightful backing vocals. Actually, the backing vocals are basically the only vocals, with the song working as a sort of tribute to Tommy Dardar. Big Daddy Gumbo was Tommy Dardar’s nickname. This track has some wonderful stuff on sax, as well as cool work on harmonica.