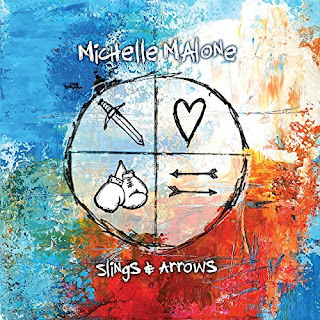 Even if I hadn’t already been a fan of Michelle Malone’s music, I would have wanted to listen to her new album because of its title. I’m slightly obsessed with Shakespeare, and the title Slings & Arrows is a reference to a line from Hamlet’s most famous soliloquy. “Whether ’tis nobler in the mind to suffer/The slings and arrows of outrageous fortune,/Or to take arms against a sea of troubles/And by opposing end them.” This entire country is dealing with a mass of troubles these days, and in our darker moments, we might wonder whether it might be better to just step away from them entirely. Every day it seems things are getting worse, and the only real answer – the destruction of Trump, Pence and the rest – lies well beyond our own individual means. Well, some of the songs on this album might get you probing the day’s troubles too, but this is not a depressing CD. Quite the opposite. Overall, this is an album of power, of attitude, driven by Michelle Malone’s strong vocals. She lets it rip. Slings & Arrows features mostly original tracks, written or co-written by Michelle Malone. Michelle plays acoustic guitar, electric guitar, slide guitar, mandolin and harmonica on this album. Joining her are Doug Kees on electric guitar, Robby Handley on bass, Christopher Burroughs on drums and Trish Land on percussion.

The album opens with “Just Getting Started,” an empowering song, full of energy and attitude, a good rocking number that demands some volume from your stereo. This is one you might want to sing along to, or shout along to. “You can’t stop me now/You can’t stop me now/I’m just getting started.” Onward! “Just Getting Started” is followed by “Love Yourself,” which begins with some good percussion to get your body moving. “When they go low, you go high/Do unto others, even when we don’t see eye to eye/You’ve got to learn to forgive the people thinking about themselves/You can’t love nobody until you love yourself.” Yeah, there are some tough lessons in this song, particularly these days. We all want to take the high road, but it’s difficult when the lowest road is crowded with those in positions of power and their devoted, demented followers. “You know I love my country/But she sure enough can make me cry/Just imagine how great we’d be if we were unified.”

“Sugar My Tongue” also begins by establishing a beat, and is more about pure, sexy fun than the first two tracks. This one has something of a classic soul vibe, with some disco elements. Michelle’s vocals are smoother here, sounding like the sugar she sings about. Peter Stroud joins the group on electric guitar for this track. That’s followed by “Beast’s Boogie,” a raw blues gem that comes on strong with a thumping and some good work on harmonica. This one also rocks, and should get you dancing, or at least stomping your feet. This line amuses me every time I listen to this song: “He was the Sonny to her Cher, the petrol to her match.”

The album’s only cover is “I’ve Been Loving You Too Long,” that gorgeous Otis Redding song, and Michelle Malone does a fantastic job with it, delivering an excellent, impressive vocal performance. Interestingly, it’s done as a duet with Shawn Mullins. He does a fantastic job too. Of course, as a duet, the song has a different feel, as we learn both people in the relationship feel the same way, so it doesn’t have quite the same heartache. By the way, Shawn Mullins also sings on Day2, the 2012 album that turned me on to Michelle Malone. Randall Bramblett is also featured on that earlier album (and on 2014’s Acoustic Winter). I’ve been impressed by Randall Bramblett’s songwriting, and on this album he and Michelle Malone co-wrote one track, “Fox And The Hound.” It’s more of a rocking bluesy song. “If I were a rocket, you’d be the fuel/We’d explode with a deafening sound as we take to the moon/Or Venus or Saturn, you never can tell/Well, I’m going wherever you’re going, come heaven or hell.”

The tone at the start of “Civil War” is like angry folk, then it too takes on a heavier vibe. “Since I took your name, it’s only caused me misery/Like when you call me baby, and raise your hand to me/The bullets in the barrel/Don’t make me bring the hammer down.” This is a strong track, and it features some good work on harmonica. In “The Flame,” Michelle sings, “There’s too much darkness in here to see/And I’m so tired of misery.” Yup, that about sums it up for a lot of us these days. “Don’t give me that bad news, I can’t read it anymore/Ain’t nothing but the sad blues piling up by my door/Trust is gone now, but hope remains.” And that’s the truth too: we still have hope. There is something pretty and moving about this song. “The Flame” was written by Michelle Malone and Eliot Bronson. The CD then concludes with “Boxing Gloves,” another powerful track, in which Michelle sings, “I took off my boxing gloves and I found that I was stronger.”

CD Track List
Slings & Arrows is scheduled to be released on March 2, 2018.
Posted by Michael Doherty at 7:14 PM