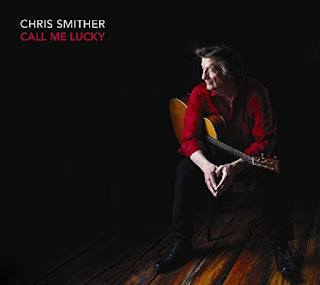 Chris Smither has been putting out excellent music for a long time. I started listening to him in my late teens, around the time of the release of Another Way To Find You. Since then, he has consistently given us strong material, mixing folk and blues. As he sings in “By The Numbers,” “You can count on me.” Indeed, we can. His new release, a two-disc album titled Call Me Lucky, is just exactly what I want from Chris Smither, with topnotch songwriting and truth pouring from every line. It features mostly original material, but also some interesting choices of covers. The second disc contains quite different renditions of five of the original tracks from the first disc. The musicians backing him on this release include Billy Conway on drums, percussion and acoustic guitar; Keith Gary on piano and backing vocals; David Goodrich on guitar, piano, kalimba and percussion; Matt Lorenz on violin, piano, organ, guitar and backing vocals; and Mike Meadows on drums and percussion.

Chris Smither kicks the new album off with “The Blame’s On Me.” This song is sort of the title track, as its first lines are “They call me lucky, but I don’t know why/I ain’t been lucky since the day you said goodbye.” These lines grabbed me, but one line that really stuck out for me is, “They call me crazy and it might be true.” We all feel a little crazy these days, and certainly every other person out there is bonkers, no question. This tune is a good, bluesy gem. Chris follows that with a very cool cover of Chuck Berry’s “Maybellene.” This version is unlike any other I’ve ever heard, with Smither’s vocals sounding delightfully rough. In this version, it feels like he’s really asking her, “Why can’t you be true?” Like he truly wants to know, and needs to know. There are some surprising elements to this rendition, including the presence of violin, the use of backing vocals, and even some haunting whistling. You just have to hear this track. It will give you a whole new perspective on this song.

“Down To The Sound” is interesting right from the start, sounding like the band is tuning up, getting ready, and then a folk sound emerges. It’s a moving, intriguing song. Here is a taste of the lyrics: “Chaotic collections of symbols of me/It all comes down to the sound/And when you can’t find a key/Spin it around on the common ground/’Til it sounds like me.” That’s followed by “Nobody Home,” a lively folk tune with the feel of rock and roll, particularly in that piano, and in the vocal delivery, which reminds me a bit of Bruce Springsteen. There is also some nice work on violin.

Something about “By The Numbers” had me nearly in tears the first time I listened to it. I’m not sure if that says more about me or the song, but there you have it. I think a lot of us are on the edge these days, and music has always had a strong effect on me. But something about the tone, the words, Chris’ delivery really got to me, and quickly. “One more time into the deep unknown/One more time into the soul/One more run to get this done/Then let it go.” Or maybe it was the line “And don’t get old alone.”  And at the end, when he sings, “You can count on me, count on me,” there is some relief. I think we all need to hear someone say that these days. Then “Change Your Mind” has a somewhat playful vibe. “There’s changes in the weather, it’s a mystery every day/Yeah, but life goes on no matter rain or shine/The birds don’t change their feathers just because the sky is grey/Much less would I consent to change my mind.”

Chris Smither does an interesting, thoughtful rendition of “Sittin’ On Top Of The World.” This is a song that I first heard done by the Grateful Dead, who included it on their self-titled debut LP. This version by Chris Smither is a lot slower, more in line with earlier renditions, and is really good. The first disc ends with “Lower The Humble.” Check out these lyrics: “Calls to action, guns and steel/Mindless distractions to make us all feel/That we live to some purpose, but what they reveal/Is the depth of the hunger for anything real.”

The second disc opens with a cover of The Beatles’ “She Said She Said.” Like with “Maybellene,” Chris Smither really gives his own personal spin to this song. This time, the pace is basically the same as the original version, but the tone is more intimate and honest. I love it. The rest of the tracks on the second disc are different versions of songs from the first disc, beginning with a rowdy, forceful take on “Everything On Top.” It’s like a totally different song. That’s followed by “Down To The Sound.” Like the version on the first disc, this version is moving and intriguing, but it has a different sound, a different vibe. I particularly like Chris Smither’s vocal delivery on this version. This version is without violin.

“Nobody Home” is quite a bit different from the version on the first disc. The focus is more on the vocals, and as a result that verse about Trump packs more of a punch in this version. “I said I was a citizen just tryin’ to cut a deal/For a Russian unicycle with a missin’ wheel/They let me through/I saw a clown with a comb over tryin’ to float a loan/Through the CIA while he tweeted on his phone/But there ain’t nobody home.” I like this song on the first disc, but this version on the second disc is one of my absolute favorites. I really appreciate the lyrics, particularly these lines: “It’s getting hard to maintain connections in a personal way/Everybody wants to text me ‘cause they ain’t got nothin’ to say/Believe me when I tell you it’s like being alone.” Perfect. The second disc concludes with “By The Numbers.” I mentioned how the version on the first disc really affected me. Well, this version is somehow even more stirring. On this rendition, Chris’ vocals are accompanied by just piano. A beautiful way to end this exceptional two-disc album.

Call Me Lucky is scheduled to be released on March 2, 2018 on Signature Sound Recordings.
Posted by Michael Doherty at 11:36 PM