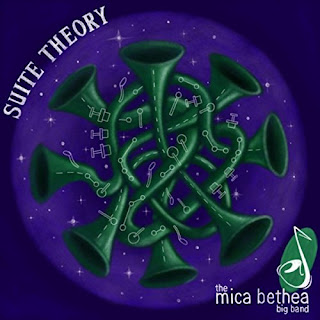 There were two reasons I first put on Suite Theory, the new album from The Mica Bethea Big Band, neither of which had anything to do with the music. The first is the color scheme of the album cover. Purple and green are my favorite colors, and so I was naturally drawn to this disc (though in photos it looks more like blue and green – weird). The second is the title of one of the tracks, “Meniscus.” I tore the medial meniscus of my left knee on July 13th. It’s a word I didn’t know before July, and a word that has been on my mind a great deal since then. So I felt a need to hear that track. Sure, these are perhaps not the best reasons to choose a CD to listen to, but I’m glad they helped make the choice, for Suite Theory is an excellent album.

It features four connected pieces, the first titled “Crystal Clear.” This track is a wonderful reminder that life is good. It seems to be saying just that, what with that work on horns, and with that easygoing, joyous rhythm. It’s a reminder we can use these days. And then suddenly the horns quiet down, and there is a cool lead on bass, which makes me smile. Actually, much of this track makes me smile. The horn solos that follow the bass solo have distinct personalities, and display a clear sense of humor. There is a great deal of joy in this music; this track is a delight. It is followed by “Destiny’s Boat,” which immediately feels different, having a darker tone, a sense of foreboding at the very start that gives way to a lighter sense, but still with a serious, introspective vibe, sometimes moving with caution, sometimes gathering its forces and courage to burst ahead.

“Meniscus” announces its lighthearted approach at the beginning, making interesting use of pauses. This track features some cool percussion, a bit of a jazz fusion feel and sudden Latin rhythms. This tune feels like an offbeat character from a forgotten 1970s romantic superhero exploitation film, a delightful character with several different sides, each coming to the surface at the opportune moment. It’s a lively and unusual track that includes a percussion solo that I love. This track leads straight into “Guardian Of Forever.” This too has something of a 1970s feel, with a bit of funk, at moments threatening to cross the line into disco. Yeah, it’s a fun track. At one point, it goes into an area akin to progressive rock. Star Trek fans will recognize the title as a key element of an episode of the original series, “The City On The Edge Of Forever.” It is a portal to other times and places, and The Mica Bethea Big Band pulls us through the portal to a delightful time. The album then concludes with an alternate take of “Destiny’s Boat.”

CD Track List
Suite Theory is scheduled to be released on March 1, 2018.
Posted by Michael Doherty at 7:56 PM