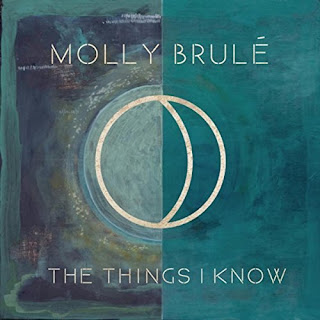 Molly Brulé is a singer and songwriter based in Boston, deftly mixing folk, country and pop elements in her music. She released her debut EP, Seasons, in 2015, and recently followed that with a full-length CD, The Things I Know. The new album features all original music, written by Molly Brulé. Joining her on this release are Mike Levesque on drums; Sean McLaughlin on electric bass; Bryan Worley on upright bass; Dan King on guitar; Chris “Gooch” Bloniarz on mandolin, banjo and organ; Eva Walsh on violin; and Liz Lawrence on pedal steel. Sarah Brulé and Amy Brulé provide backing vocals.

Molly Brulé opens this album with “Lose You Now,” a song with sweet folk-pop sounds. She employs some traditional folk instruments, such as mandolin and violin, and applies them to a song with strong pop elements. Or is she applying pop elements to a folk and country song? I suppose it doesn’t matter. Either way, her voice is able to thrive in this bridging of genres, with country, folk and pop all wrapped up in her delivery. “The silence screams at us/Begging us to break/But we're wordless just because/We're too damn tired.” “Lose You Now” is followed by “Band-Aids,” which has a comforting, friendly, positive sound, a sound we can all use these days as we try to find a way forward through the daily disasters since that mendacious, narcissistic racist stumbled into power. “Forgive and try to forget/Rebuild without regrets/There is something beautiful/Still under the rubble.”

“One Last Night” features perhaps the album’s most moving vocal performance. Here she expresses vulnerability, a desire, a need, even as things seem to be ending. “Hold me close, one last night with you.” And as she urges “Don’t hold back, don’t hold back,” we get the sense that she herself is not holding back, but laying herself bare. “You’re better off/Without my love/It was never enough/But what’s done is done/Now I feel the sun/Shining through to me now.” That’s followed by “Ticket West,” a lively song that I’ll be adding to my road trip play list, especially because of these lines: “Not gonna stop, so don't even try/The highway is wide open.”

“Promises” begins with a sweet folk vibe, that violin rising above the comforting rhythm, and then Molly’s vocals sounding so loving, so honest. “Oh, my world is/The color of your eyes/Everything else that I see/Is just black and white.” The song then kicks in with a joy that might get you moving. This is a really good love song. Oh, to need someone is a wonderful, frightening, beautiful thing, isn’t it? And she expresses it so well. “You are so strong/When I am weak/And you are so grounded/When I can’t find my feet/Even though tonight/You’re a thousand miles away/I can still hear your heartbeat beating away.” And I love the violin, particularly toward the end. That’s followed by another love song, “Hey There,” a delightful, playful song. And as she sings “I wanna be/The girl that drives you crazy/And you could be/The one that makes me happy,” her voice sounds so innocent, youthful, and excited. There is even a bit of whistling toward the end. With that and a mandolin, how could anything sound happier? “’Cause I finally found that real life/Is better than my dreams.” Oh yes.

Perhaps the most interesting track is “My Old Friend.” This one engages you and grabs hold immediately and doesn’t let go. That bass line, and the way the strings are used, and Molly’s vocal delivery all add up to an intense feel. “It's a long way, a long way down/I hear your, hear your sound/Echoing dropping me down the well/'Til it's me, only me.” I like this entire album, but this might be my favorite track. This one really demands your attention. The CD then concludes with a different version of “Band-Aids.”