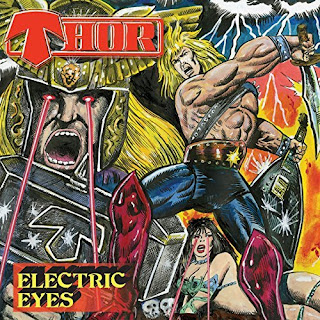 Electric Eyes is an album that Thor recorded in 1979, intended to be the follow-up to the hard rock band’s first LP, Keep The Dogs Away. For one reason or another, it was left unreleased until now. Of everything I’ve heard from Thor, Electric Eyes is my favorite album. It has more of a raw, straightforward rock sound than other material I’ve heard (admittedly, I haven’t listened to Thor’s entire catalogue). It features mostly original material, written or co-written by Jon Mikl Thor, with just one cover, a good rendition of The Troggs’ “Wild Thing.”

Electric Eyes opens with “Special Flight,” a seriously good rock number with a steady driving rhythm. It begins with a jam, and I love the way it builds before the vocals come in. There is a bit of punk to its sound, and a bit of glam. Basically, it has everything you could want from a late 1970s rock tune. Oh, those innocent times. “We’re not trying to be rough/We’re not trying to be tough/We just want to have fun/So grab all the girls, lift up their dresses/Have some fun in the sun.” I particularly dig that bass. That’s followed by “She’s A Fancy Lady,” a fun rockin’ tune with a strong rhythm. And speaking of glam, this song refers to “All The Young Dudes” in the line “All the young dudes just sit and stare.” I grew up listening to a lot of music like this, and don’t listen to enough of it now. This is a treat, and is one of my favorite tracks. It brings me back to my early childhood.

“Interception” reminds me just a bit of Heart’s “Barracuda” at moments, with that rhythm on guitar. The song fades out just as it seems to be building, which is an interesting effect. That’s followed by the album’s only cover, The Troggs’ “Wild Thing,” which has a raw feel and a playfulness, both of which are totally fitting. There is also some good work on guitar. It’s an all-round good rendition, and it too includes an unusual fade-out at the end, with the instruments sounding like they fade out faster than the vocals. Sure, the album’s title track, “Electric Eyes,” is a bit goofy, with the lines “Electric eyes, those laser eyes/You must beware those lightning eyes,” but I’m already fully on board, and ready to go wherever this album takes me. And it features more good work on guitar.

“Twitch (Let’s Go)” is one of my favorites. It immediately establishes a rhythm to get you on your feet, and has a bit of punk to its sound, as well as some playful backing vocals. “Oh, I want to kiss you (Kiss you)/Oh, I want to squeeze you (Squeeze you).” It’s a totally enjoyable rock song. Another of the disc’s highlights is “Poison,” a song I love right from the start. It’s a joyful, fun hard rock song, with just enough pop to make it one to get you dancing. This sound really takes me back to a time when the world made a little more sense, when problems could be solved in the length of a song. Songs like “Twitch” and “Poison” make this album worth picking up. Then, with a title like “Gladiator Romp,” you know the disc’s closing number is going to be fun. It has something of a theatrical element in the vocals, the way certain lines are delivered.

CD Track List
Electric Eyes was released on January 26, 2018 through Deadline Music, a division of Cleopatra Records.
Posted by Michael Doherty at 4:07 PM