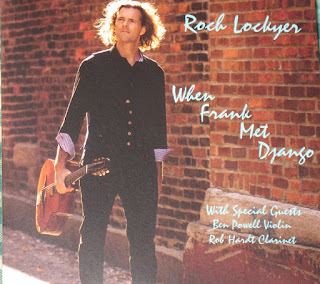 Say what you will about Frank Sinatra as a person (I’m not sure I’ve ever heard anything pleasant about him), but he made some excellent records, and his vocals were often perfect. As for Django Reinhardt, I first learned of him when I saw Woody Allen’s Sweet And Lowdown and was captivated by the music. He is one of the greatest guitarists. So we’re talking about two people at the top of their game, masters of music. Jazz vocalist and guitarist Roch Lockyer brings them together on his new album, When Frank Met Django. Most of these tracks are songs that both Frank Sinatra and Django Reinhardt recorded during their careers, and Roch Lockyer approaches them with a guitar style honoring the work of Django Reinhardt. Joining him are Ben Powell on violin, Rob Hardt on clarinet and Ed Bennett on bass. There is a lot of joy in this music, in its execution. So if you’re looking for something to lift your spirits, this disc may do the trick.

Roch Lockyer opens the album with “My Foolish Heart,” his vocal approach having a somewhat traditionally romantic bent, which is wonderful. But I especially love the guitar, particularly during the instrumental section. There is also some delightful, cheerful work on clarinet. This rendition follows Frank Sinatra’s early recording when he sang “the ever constant moon.” In a later version, Frank changed it to “the ever distant moon.” The “constant moon” reminds me of that famous scene from Romeo And Juliet, where Juliet tells Romeo, “O, swear not by the moon, th’ inconstant moon.” That’s followed by “It Had To Be You.” While Sweet And Lowdown turned me on to Django Reinhardt, it is another Woody Allen film I think of whenever I hear this song. Diane Keaton makes her way through this one to a not quite enthusiastic crowd in a famous scene from Annie Hall. This version by Roch Lockyer is a treat. “For nobody else gave me the thrill/With all your faults, girl, I love you still/It had to be you, wonderful you.” I love the exchange between guitar and violin during the instrumental section, which has a quicker pace than the main body of the song. It’s like a happy, loving conversation, a dance.

“When Day Is Done” begins with some wonderful work on guitar. That’s followed by an original composition by Roch Lockyer, “Musings/Improv #1,” a guitar instrumental piece, with some impressive playing. This music transports me to another time, another place, and these days I am certainly grateful for that. After all, who the hell wants to be in the United States in the time of Donald Trump and his fellow fascist creeps?  Roch follows the original composition with a delightful rendition of Cole Porter’s “Just One Of Those Things.” “Here’s hoping we’ll meet now and then/It was great fun/But it was just one of those things.” The instrumental section really takes off. That part ends somewhat abruptly; I would have loved it to continue for a while longer. “I Thought About You” is another of this CD’s delights. If I sang this song to my girlfriend, she’d say I was being goofy, but this is exactly how it is. This song has such a positive vibe, with some excellent work on both guitar and clarinet. I love that playful and sweet conversation the two instruments have toward the end. That’s followed by “Embraceable You,” and this music is really beginning to make me long for my sweetheart. I want to take her away to some distant place, where the world is just a wonderful, beautiful backdrop for us to stroll across, with cafés and narrow streets and old buildings and street musicians and rivers and sunsets. “Don’t be a naughty baby/Come to papa, come to papa, do.” The CD then concludes with another original composition, “Improv #3” (hey, what happened to #2?), a guitar instrumental with a gentle, light sound.