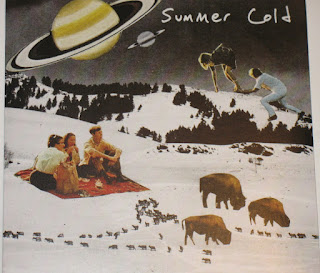 A few years ago I wrote a review of Mason Summit’s 2014 release, Loud Music & Soft Drinks, and in it I mentioned that I was impressed by Mason's work and was a bit shocked to learn that he was only eighteen. I wrote, “Imagine all the good things still to come from this singer/songwriter/musician.” He didn’t wait long to give us some of those good things, releasing Gunpowder Tracks in 2016, an excellent album with well-crafted original songs, and now Summer Cold. Once again I am impressed by his songwriting and his style. This album features all original material. In addition, this one finds him playing most of the instruments himself. In fact, only three tracks feature other musicians. John Groover McDuffie, who played on the previous two releases, here masters the recordings, as well as engineers and mixes a few tracks. It was the participation of people like John McDuffie and Carl Byron that first got me interested in Mason Summit’s work. But it is Mason’s songwriting and delivery, as well as his ability to surprise and engage me, that keep me interested.

This new album opens with “Almost Fell For It,” with a sound and style somewhere between pop and punk, and mostly punk in attitude. The line “I almost fell for a total crock of shit” made me laugh the first time I listened to this disc. “To say I told you so/I’d be a hypocrite/’Cause I almost fell for it/It’s so obvious now/It pains me to admit/That I almost fell for it.” Is this the perfect song for these days? I mean, there is so much bullshit out there. Sadly, a lot of folks have fallen for it. (Seriously, how does anyone believe a single word that comes out of Donald Trump’s hole?) This track features Jeff Frantom on bass and Jarren Heidelberg on drums, and is one of the tracks engineered and mixed by John McDuffie. Then “Take What I Can Get” has a gentler sound, but this song is a good companion to the first track. Its first line is “I expect nothing from you, and you haven’t failed me yet.” There is a delicious, strangely sweet humor to this song, as he follows that line by singing “I’ll take what I can get.” So even as he offers biting lines like “Your giggle makes me gag/Your smile makes me choke” he admits to not having (or even wanting) a distance from the person who is the song’s subject.

There is humor also in “Voodoo Doll,” in the pain the character suffers, in the way it is expressed. The opening lines of this one are “I call you now not seeking closure/Rather one more excuse to lose my composure.” And the line “But I think I have discovered a whole new type of pain” makes me smile. These are some good lyrics, right? And check out these lines: “And I don’t want to get better/I don’t want to get well/I think I’ll spend forever/In this broken-hearted hell/I’m self-sufficient, I can break my own heart/I don’t need anyone else to help me with that part.” Yeah, he’s a damn good songwriter. I could quote this whole song as examples of his talent. And the lyrics are delivered so simply, in a manner unadorned, accompanied mainly by some steady strumming on guitar. Then in “Like Hell,” the line that really stands out is “I miss you like hell and I hope I never see you again.” That’s one hell of a good line.

“Biting My Nails” is a darker-toned, engaging folk tune. It contains a strange, surprising play on the word “bluff”: “Racing toward the cliff, until I call your bluff.” But I also like the gentle instrumental sections of this song. The album’s only instrumental track, “Casu Marzu,” is a strange one. It borders on cheesy (as possibly admitted to in its very title?), with its electronic drumbeat and tone, but becomes twisted along the way, before it can get into that realm, feeling almost like a comment on that type of music. An interesting effect. Before I can think too much about it, the track is over (it’s less than two minutes long).

I’m trying to get over a cold. It came on in the evening of Valentine’s Day, and seems reluctant to leave me. The first time I listened to “Summer Cold,” the album’s title track, I started coughing, and though it is not summer, I appreciated my body’s connection to the music. “I hope it doesn’t last too much longer/I’ve got this summer cold/I hope it doesn’t spread/So I’ll stay here in bed ‘til I’m stronger.” There is some humor when he explains how he got his cold. This track features Jeff Frantom on bass and Jarren Heidelberg on drums, as does the album’s closing song, “Stick It Out,” which has more of a pop sound. John McDuffie mixed both tracks. “I’m gonna stick it out/For however long it takes/I’m gonna stick it out/’Til my mind and body break.”