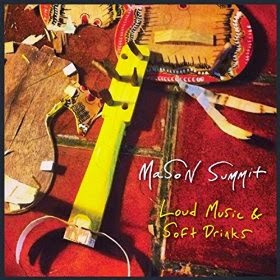 Mason Summit’s new album, Loud Music & Soft Drinks, features some really good material, particularly "In A Lonely Place" and "Village Dogs." All of these tracks are originals, showcasing Mason Summit’s songwriting abilities. For example, check out these lines from “Flake”: “You’re the secretary of pretense/There’s only so much I can be against/But it all keeps coming up, bringing me down.” Also, this line from that same song: “Like a hearse, I always know just where you’re going to.” Even when he seems to resort to a cliché, as he does in the love song “Pretty Penny” when he sings, “You’re a sight for sore eyes,” he saves it with the following line, “And believe me, my eyes are sore.” He then further improves upon it by adding, “But I feel better seeing you in that tight black turtleneck sweater.” (Amen!) And the phrasing of those lines is interesting too. He’s also quite a good musician, playing acoustic guitar, electric guitar, bass and even organ on one track.

And he has a great group of musicians backing him, including Carl Byron on organ and piano, and John McDuffie on electric guitar and pedal steel guitar. You can hear Carl Byron on Anne McCue’s excellent new album. And, as I’ve mentioned before, John McDuffie’s presence always gets me interested in a project. You can actually hear both of those musicians on last year’s Steven Casper & Cowboy Angst CD, Endless Sky. In addition to them, the album features Jason Chesney on bass, Zander Schloss (from The Circle Jerks) on bass, Shawn Nourse (from I See Hawks In L.A.) on drums, and Lynn Coulter on drums. John McDuffie engineered, mixed and mastered this release, while Mason Summit produced it. I’m impressed by Mason's work here, and so am a bit shocked, perhaps even a little annoyed, to learn that he’s only eighteen. Imagine all the good things still to come from this singer/songwriter/musician.

Mason Summit kicks off his the CD with “Two Friends,” a fairly straight-forward pop rock tune about friendship. Here is taste of the lyrics: “Two friends sit down again/No awkward conversation, just friends/And the stubborn rock in his shoe/Feeling new and said/If you’ll lower your expectations/I’ll drop my affectations/We’ll commence negotiations.” It’s a decent song, but for me things start to get much more interesting with the second track, “Kaleidoscope,” a quirky little tune played on classical guitar, with the addition of flute in the second part of the song. (That’s James King, of Fitz And The Tantrums, on flute.)

Even better is “In A Lonely Place,” a strong, emotionally charged track. Mason Summit creates a vivid portrait of an area and its denizens, and he really sells it on the vocals. When he sings the title line, “In a lonely place,” you can hear the desperation. “Down on the corner making a deal/To try and fight that urge to feel/In a lonely place.” And he places the listener in the city, singing, “You shouldn’t believe her this time.” This track features John McDuffie on both lap steel and pedal steel, and is one of the best songs on this CD.

“Puddle” is the only instrumental track on the album. It’s a kind of mellow track which Mason Summit performs solo, playing electric guitar, acoustic guitar and bass. “Later” is a very short, but kind of pretty track. It has vocals, but no lyrics.

“Right Mind” has something of an early rock flavor to it, both in the music and in the vocal approach (listen to the way he sings “I wanted you so bad/Tried so hard to hold on”). Plus, it benefits from the addition of James King on saxophone. Jason Chesney plays bass. I really like these lines: “I’m at your beck and call/You are a wrecking ball.” Another of my favorites is “Village Dogs,” which has a cool groove and vibe. “On the roof everything is all right/It’s warm now, but it’s so cold at night/I can see out to the lake/I can see past my mistake.” This one features John McDuffie on electric guitar.