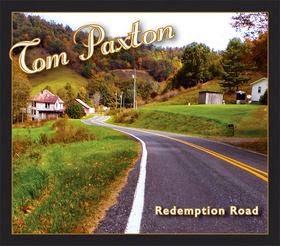 Tom Paxton is one of the most respected and influential singer-songwriters. He really helped shape contemporary folk music, and received a Lifetime Achievement Award in 2009. His music has been covered by artists like Bob Dylan, Willie Nelson, Neil Diamond, John Denver and many others. And now in his late seventies, Tom Paxton is releasing an excellent new album, Redemption Road. All tracks but one are originals. After all these years, Tom Paxton is still writing effective and often moving folk songs, while of course maintaining that sense of humor and sense of fun. This album also features guest appearances by John Prine and Janis Ian.

Redemption Road opens with “Virginia Morning,” a sweet and positive tune with good, pleasant vibes. It’s a song designed to put a smile on your face, and does so for me every time I listen to it. Here is a taste of the lyrics: “It’s good to be alive, Virginia morning/It’s good to feel your earth beneath my feet/Rise and shine, Virginia morning/You’ve got a sweet, sweet Virginia day to greet.”

“Virginia Morning” is followed by “Susie Most Of All,” one of my personal favorite tracks. It has a relaxed feel, and a delightful humor as well as love in the delivery. It opens with these lines: “Wish I had a nickel, wish I had a dime/Wish I had Susie, and Susie had time to play/Susie had time to play/The thing about Susie, Susie can play all day.” As much as I love Tom Paxton’s vocal delivery on this one, it’s probably the music that makes this track a highlight. It’s just totally delightful.

“Time To Spare” has the feel of a traditional Irish folk ballad, and so of course I bloody love it. It’s that great sweet ease of his vocals that makes this song so effective. “I’ve been thinking about you lately/I’ve been wondering where you are/It’s been years since we went rambling through the night/You were going to write your novel/I was going to be a star/We were young, and things were sure to work out right.” I love the fiddle.

“The Losing Part” is a wonderfully depressing song about aging. Somehow listening to this song makes it easier to accept, as the song is like a hand reaching to help you through. And it’s inevitable anyway, right? This one really affected me, nearly had me in tears the first time I heard it. “When it never came true/Never happened for you/It just slowly faded away/’Til it broke your heart/Some dreams die harder/Some are living yet/Sooner or later you get/To the losing part.” “Come On, Holy” is another of this album’s tracks that really moves me. It was co-written by Tom Paxton and Jon Vezner, and has a positive and friendly feel.

John Prine joins Tom on vocals for “Skeeters’ll Gitcha,” a fun and light-hearted little tune about mosquitoes (“skeeters’ll gitcha if your screens ain’t tight”) which also features some nice work on fiddle. My favorite lines are: “You were missing on the day they passed good sense around/If you had any sense, then you’d have to agree/If you had any sense, then you couldn’t love me/Give me a sweet little kiss.” Another fun track is the lively and affectionate “The Mayor Of MacDougal Street,” a good tune about Dave Van Ronk. “No one’s replaced him yet, and no one will.”

“Central Square” is another of my favorites. It’s such a beautiful song, and it’s one that grabbed me immediately. The first time I put this CD on, I was taking care of some things in my apartment, and this song made me stop what I was doing, and just sit down and listen. “I saw the road that led to home, but I took another way/I met the girl I came to love one night in Central Square.” Of course, this song speaks to me in part because I met the woman I love in Central Square, Cambridge, Massachusetts. But I don’t plan on making the mistake that the character of this song makes.

Janis Ian joins Tom on vocals on “Redemption Road,” the album’s title track, a song that Tom Paxton co-wrote with Geoff Bartley. Geoff wrote the music, and Tom wrote the lyrics of this touching song. “Only time and time alone/Treats each weary soul the same/When my sum of days is flown/Time alone will know my name.” The album then concludes with its sole cover, a rendition of the tradition song “The Parting Glass,” with the lyrics delivered a cappella followed by a brief instrumental section.

CD Track List
Redemption Road is scheduled to be released on March 10, 2015 on Pax Records.
Posted by Michael Doherty at 2:27 PM