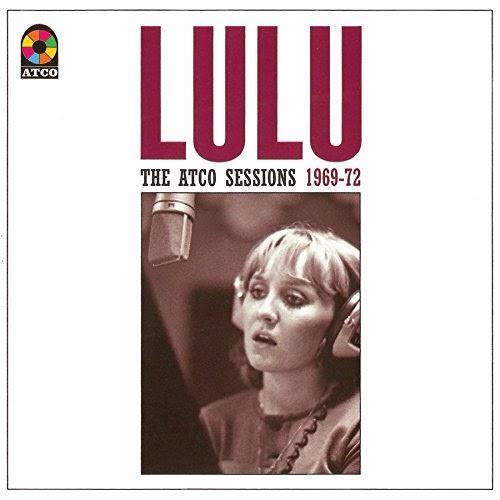 These days when I think of Lulu, I think about Absolutely Fabulous, and her wonderful appearances as herself on that program. And I hear Jennifer Saunders repeating her name, and suggesting she sing “Shout” or something. But of course she’s still probably best known for singing “To Sir With Love” and the theme from the 1974 James Bond film The Man With The Golden Gun. In the late 1960s and early 1970s, Lulu dipped a bit into soul (well, a mixture of soul and pop), and The Atco Sessions 1969-1972 collects two complete albums as well as singles and outtakes from that time. This two-disc set also includes liner notes by Richie Unterberger.

The first disc contains the two complete records, New Routes and Melody Fair, both released in 1970. New Routes was recorded in 1969 at Muscle Shoals. It kicks off with a couple of Bee Gees tunes. The first, “Marley Purt Drive,” is a really cool track, with a vibe that might call to mind The Band. Lulu’s version is a bit less country rock, especially with the addition of horns, giving it more of a New Orleans feel. I love what she does vocally on “People In Love,” a song written by Eddie Hinton and Grady Smith. The energy in her voice is perfect. Lulu also does a groovy cover of “Feelin’ Alright,” a song originally done by Traffic, but also famously covered by Joe Cocker. Lulu’s version has a fun vibe and some nice work on horns. Also fun is her rendition of Delaney & Bonnie’s “Dirty Old Man” (co-written by Mac Davis and Delaney Bramlett). And I like her sweet version of “Mr. Bojangles.” The song that became a hit from this record, however, was “Oh Me Oh My (I’m A Fool For You Baby),” a mellow tune that would later be recorded by Aretha Franklin.

Melody Fair was recorded at Criteria Studios in the spring of 1970, and it opens with a strange cover of The Beatles’ “Good Day Sunshine.” That was never one of my favorite Beatles songs, but Lulu does some interesting things with it. She follows that with a heartfelt rendition of “After The Feeling Is Gone,” a song that was also recorded by Five Flights Up. One of the coolest tracks on this album is “I Don’t Care Anymore,” written by Jerry Williams, Gary Bonds and Maurice Gimbel. This song creates a compelling character. Here is a taste of the lyrics: “Then I met a guy as smooth as silk down in a midtown bar/Told me with my good looks I’d go very far/I didn’t know just what he meant/Well, I thought he was heaven sent/And all of his sweet talkin’ sent me streetwalkin’/That was the part that broke my heart.” (I love the way she holds onto the word “smooth.”) Lulu also does Bonds and Williams’ “To The Other Woman (I’m The Other Woman).” As on New Routes, on Melody Fair Lulu covers a Bee Gees song from Odessa, this time the song providing Lulu with her album’s title. She also covers Randy Newman’s “Vine Street,” a song that Harry Nilsson also recorded. Lulu has some fun with this one; when the song switches from that opening, energetic section to the mellower section, there’s a bit of studio banter (“Nice one”). “Move To My Rhythm” is also a fun track, and I dig the horns. Melody Fair ends with “Saved,” a tune written by Jerry Leiber and Mike Stoller, and originally recorded by Lavern Baker and also covered by The Band. She really gets into the gospel aspects of the song, especially with the backing vocalists.

The second disc contains singles and outtakes. And like the first disc, it opens with a Bee Gees song, this one being “Bury Me Down By The River,” a song from that band’s 1970 release, Cucumber Castle. She also delivers a seriously fun version of the Bee Gees’ “Back Home,” a song from 2 Years On. This is a good dose of rock and roll, and is one of my favorite tracks on the second disc. She does a peppy gospel-pop tune called “Got To Believe In Love,” written by Neil Goldberg. It’s an odd mix of gospel with bubblegum teen sounds. Interestingly, this song was also recorded by Robin McNamara in 1970. At the time, he was playing Claude in Hair, and several other cast members are on his recording of this song. There are two versions of this song by Lulu, the single version and an early version. I prefer the early version. There is also an early mix of “I Don’t Care Anymore” and a different version of “Hum A Song (From Your Heart)” (with a bit of studio banter at the beginning), as well as an Italian version of “Oh Me Oh My,” titled “Povera Me (Oh Me Oh My).” Lulu also covers Elton John’s “Come Down In Time.” The only track on the second disc that I don’t care for is “Things Are Getting Better.”