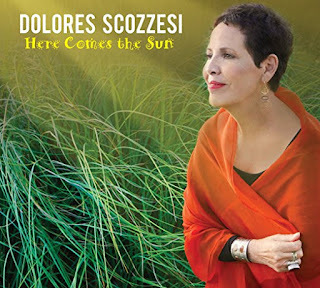 Jazz vocalist Dolores Scozzesi has a voice that seems at home in any musical realm. She can tackle standards, handle those great smoky late-night numbers, deliver intriguing renditions of pop tunes, dip into songs with Latin flavors, and do it all with soul and style. On her new release, Here Comes The Sun, she is backed by Quinn Johnson on piano, Andy Langham on piano and melodica, Lyman Medeiros on bass, Kevin Winard on drums and percussion, Larry Koonse on guitar, Dori Amarilio on guitar, and Nolan Shaheed on trumpet. Here Comes The Sun was produced by vocalist Mark Winkler.

Dolores Scozzesi kicks off the album with Cole Porter’s “It’s Alright With Me,” a wonderful rendition, delivered with a strange sense of urgency. Check out that work on bass, which drives the song forward at a wild pace. And the way Dolores delivers lines like “You can’t know how happy I am that we met/I’m strangely attracted to you/There’s someone I’m trying so hard to forget/Don’t you want to forget someone too?” make me think she’s trying to get this guy into bed quickly before she has second thoughts. And there is a fast flight along the keys, followed by some nice work on guitar. That’s followed by a very cool rendition of “I’m In The Mood For Love,” her voice supported just by a wonderful bass line at the beginning. Then there is a surprising and delightful lead on melodica. Oh yes, this track is getting me in the mood for love, and it will likely do the same for you.

I am a big fan of Randy Newman’s work. Well, his early work, before he sold his talents to that horrible company Disney (I despise Disney). On this CD, Dolores Scozzesi covers “You Can Leave Your Hat On,” a song from Newman’s phenomenal 1972 album Sail Away. I think the first version I heard was the Joe Cocker rendition from the film 9 1/2 Weeks (I was fourteen when I saw that movie, so it had an impact on me). This version from Dolores Scozzesi features another prominent, strong bass line at the beginning, setting up a delicious vibe. And of course, the fact that it’s a woman singing this one gives certain lines a different feel. Like the Etta James version, Dolores changes the word “dress” to “vest.” She then gives an unusual reading of the “Yes, yes, yes” line, particularly with that added first “Yes,” almost like an acknowledgment that he is doing as she instructed. It sounds almost like it just slipped out, an honest reaction, before she then returns to being in control. A nice moment.  This rendition also features some good work on keys, and then that horn. Wow, that trumpet is totally fucking delicious. This is a seriously excellent version.

Dolores Scozzesi follows that with “Wild Is The Wind.” Though this song has been covered many times, the first version I ever heard was the David Bowie version from Station To Station, and that’s still the version I compare all others to. I really like what Dolores does with this song, particularly in the second half, where she adds some vocal improvisation. She then gives “Here Comes The Sun” a different and prominent rhythm, which took me some time to get used to. The song has a very different feel than that of the original version by The Beatles. Dolores also delivers quite a different rendition of “Tequila.” You might think “Tequila” would be a strange choice of songs for a vocalist to cover. After all, the lyrics comprise a single word. But this rendition features new lyrics by Mark Winkler and Dori Amarilio. It’s a goofy and playful rendition, and I like it. “And when the band played/She would be dancing/And when the band stopped/You could hear Juanita say ‘tequila’/That’s what she’d say.” The album concludes with a gorgeous rendition of “Harlem Nocturne.” I love the way Dolores delivers this one, especially when she dips into her lower registers. There is an entire world and history in her voice. Plus, this track features some wonderful work on guitar and melodica.

CD Track List
Here Comes The Sun is scheduled to be released on February 15, 2018 on Café Pacific Records.
Posted by Michael Doherty at 10:43 PM