The Great American Music Ensemble: “It’s All In The Game” (2016) CD Review 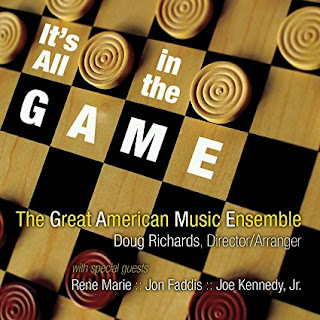 Does music have the power to lift this country out of the cesspool it has found itself submerged in since the day it allowed a mendacious, incestuous, self-obsessed, delusional, racist, fascist moron to occupy the White House? Maybe. Music can certainly lift the spirits of individuals and groups, so why not raise an entire nation from this dark pit? It’s All In The Game, an absolutely fantastic big band album by The Great American Music Ensemble, should be of help. The album takes familiar tunes and makes them thrilling once again, like they were just written. Directed and arranged by Doug Richards, the music on this disc was recorded in 2001 and features some talented and inspired musicians, as well as vocalist Rene Marie on several tracks.

The disc opens with a very strange, intriguing rendition of “In The Mood,” different from any arrangement or approach I’d heard before, but just as exciting and exuberant, particularly at the end. This will cause you to take a new look at the famous song made popular by the Glenn Miller Orchestra, and gives you an idea of what you’re in for with this outstanding disc. Things then turn romantic and sexy with “Can’t Help Lovin’ That Man Of Mine,” with Rene Marie joining the group on vocals. The way she sings “The roof is leaking,” it sounds like something to be desired. This is an interesting rendition, with certain lines delivered a cappella. I love how the instruments not only support Rene Marie, but seem to encourage her. That’s followed by one of my personal favorite tracks, “Clap Yo’ Hands.” As I’ve said on other occasions, you can never go wrong with Gershwin. At the beginning, the instruments have a delightful playfulness, acting sly, like they might hide on you, then suddenly sneak up on you. Rene Marie’s vocals have a devilish quality as well, perfect as she sing about voodoo. And then suddenly we emerge into a brighter party. The music tells us to relax and enjoy ourselves, the danger is over, as we’ve come to some understanding with the darker powers. If not a truce, then a momentary merging of joys. This is wonderful.

The Great American Music Ensemble delivers a beautiful rendition of “When It’s Sleepy Time Down South,” with Joe Kennedy, Jr. joining the group on violin. His playing is so moving, so effective, so heartfelt. This version has power and beauty, and is tremendous from beginning to end. Joe Kennedy, Jr. also joins the group for “West End Blues,” which follows “When It’s Sleepy Time Down South.” This track is ridiculously fun, with a lot of character in the performance. Seriously, there are times when I feel each instrument is a living, breathing, fully fleshed persona, and these voices together create something absolutely fantastic. Joe Kennedy, Jr. delivers more wonderful work on violin, and I love that piano, making me feel like I stepped into a bar in the old west. And those horns, those glorious, sexy horns, raising spirits and roofs and any other damn thing they please.

Rene Marie joins the band again for a sweet version of Cole Porter’s “I Am Loved,” a song from the musical Out Of This World. “I am loved/What a wonderful thing/What a beautiful thing/What a glorious thing/To be able to say.” Indeed! “They All Laughed” comes on strong like a party in full swing. Then it’s like the party pauses a moment while Rene Marie enters, to see what she’ll do. She delivers her first line a cappella, then the party joins her, and things just roll along from there. This is a great song, written by George Gershwin and Ira Gershwin, and this is a superb rendition. (By the way, if you haven’t seen the Peter Bogdanovich film They All Laughed, you should check it out.) We get more Gershwin with a sweet, beautiful, tender instrumental rendition of “Embraceable You.” The disc then concludes with a fun, lively medley of Charlie Parker compositions titled “Bird Blue.”

CD Track List
It’s All In The Game was released on March 4, 2016 through Jazzed Media.
Posted by Michael Doherty at 3:49 PM