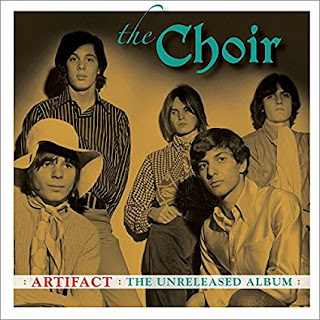 I love 1960s rock music, particularly stuff from the second half of the decade, and am surprised and thrilled when I find out about some band from that time that I previously was unaware of. Such is the case with The Choir, a band based in the Cleveland area, performing from late 1964 to 1970 (though the first two years as The Mods). They did have a moderate hit with “It’s Cold Outside,” and released a few other singles, but that was about it. It wasn’t until several years after the group had disbanded that more of their recorded material was released. There were many personnel changes in the band’s relatively short history, with several band members going on to greater success with other bands, such as Raspberries and James Gang. So the band at the end of its run was quite different from that at the beginning. Artifact: The Unreleased Album presents the band as it sounded toward the end, featuring tracks from an early 1969 recording session. The band at this point was Phil Giallombardo on organ and vocals, Randy Klawon on guitar and vocals, Denny Carleton on bass and vocals, Jim Bonfanti on drums and vocals, and Kenny Margolis on piano and vocals. Though the album has remained unreleased until now, a few tracks did appear on compilations after the band broke up. This release includes liner notes by Al Kaston, with thoughts by band members Denny Carleton and Phil Giallombardo, as well as fan Eric Carmen.

Most of the songs here are originals, with three band members contributing tracks. The first song, “Anyway I Can,” was written by Phil Giallombardo, and is a good, fun, cheerful 1960s pop song. This track was previously released on The Choir, an EP from 1976.  It’s followed by “If These Are Men,” which to my ear is more interesting. It has a good groove, sure, but a slightly more serious tone and rocks a bit more. Plus, there is some good stuff on organ. Here is a taste of the lyrics: “Although they know I’m to blame/They say don’t give in/Just make her squirm and crawl/You’ve got to show her her sins/But if these are men, then count me out.” This song was written by Denny Carleton, and was previously included on 1994’s Choir Practice. It’s one of my personal favorites of this release. “Ladybug” is another of the disc’s highlights. It has more of a psychedelic flavor and goes in some interesting directions, and includes some good guitar work toward the end. This is not your standard pop or rock tune. “Didn’t know where to go/Or where to find myself/Sailed off to fairyland/Came upon an elf/And so we wandered off/To rid us of our curse/Came upon a ladybug/Knew what she was worth.” “Ladybug” was written by Phil Giallombardo.

One of my all-time favorite bands is The Kinks, and on this album The Choir chooses as its one cover a Kinks song, “David Watts,” which was originally included on Something Else. This is a catchy and playful number written by Ray Davies about a real guy. “He is the captain of the team/He is so gay and fancy free/And I wish all his money belonged to me/I wish I could be like David Watts.” The Choir does an excellent job with this tune, sticking closely to the original version. “David Watts” was also included on Choir Practice. That’s followed by another of the disc’s highlights, “Have I No Love To Offer,” a slower and oddly compelling song, compelling particularly in the vocal delivery. “Why can’t I live my life all alone and free/I always dream about the way it used to be.” And I really like the jam that concludes the song. “For Eric” is the album’s only instrumental tune, and is one that has really grown on me. It begins innocently enough, with a simple groove on bass, which is soon taken up on keys as well. And it builds from there, and there is something beautiful and uplifting about it at times. “For Eric” was written by Kenny Margolis. Margolis’ “It’s All Over,” which follows it, is also quite effective. Check out the opening lines: “It’s all over/But now I love you/I wasn’t happy/And now you’re gone.” The album ends with an absolutely delightful and catchy song, “Mummer Band,” written by Denny Carleton. As you might guess from its title, this tune is a whole lot of fun, and clearly the band feels the same way, as evidenced by the laughter and joking you can hear at the end of the track. “Even though I’m younger, I still love your mummer band/I love rock ‘n’ roll and rhythm and blues, but oh that mummer band.”

CD Track List
Artifact: The Unreleased Album is scheduled to be released on February 16, 2018 through Omnivore Recordings.
Posted by Michael Doherty at 7:59 PM