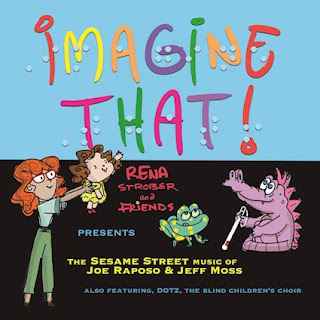 I don’t think I know anyone for whom Sesame Street didn’t play an important role during childhood. It’s remarkable how many of those songs – and those lessons – stayed with us well into our adult lives, popping into our heads at the oddest times. The songs are something we all have in common, an instant way of connecting us to others as well as to our younger selves. Now Rena Strober And Friends present new versions of some old favorites on their album Imagine That! The Sesame Street Music Of Joe Raposo & Jeff Moss. This album is something special for several reasons, besides its ability to transport us to our childhoods. For one thing, folks like Jason Alexander, French Stewart and Cristina Jones lend their vocal talents to it. For another, a portion of the sales from this album will be donated to Guide Dogs of America and Gavin R. Stevens Foundation. But perhaps most importantly, these tracks feature the vocal work of DOTZ, the Blind Children’s Choir. Rena Strober, in addition to being a singer and actor, is a strong advocate for the blind, and teaches singing to blind children. This album gives us a chance to hear their voices.

The album opens with “Somebody Come And Play,” a song that Ernie sang on the television show. This rendition has a short, pretty introduction on piano and chimes, before kicking in with the sounds of children’s laughter, the sounds of children playing. So Rena Strober is not alone at the beginning, as Ernie is in the television segment. Rena’s vocal delivery has a joyful and loving quality, which feels just exactly right for the material. “Somebody come and be my friend/And watch the sun ‘til it rains again/Somebody come and play today.” Partway through, she addresses the listeners directly, introducing herself and inviting us to shout out our names. “I am having so much fun already,” she says in the playful spoken word section toward the end. That’s followed by “Sing,” one I remember clearly from my childhood, and one with a good message in the lines “Don’t worry that it’s not good enough for anyone else to hear/Sing, sing a song.” And the kids sing those lines. Some lyrics are delivered in Spanish. This is a sweet and uplifting rendition. That is followed by the album’s title track, “Imagine That,” a playful and enjoyable number about using one’s imagination, and another that Ernie sang on the television series. As Rena sings about being a knight in shining armor in a castle by the sea, we hear the sounds of the ocean and a horse and so on. This one is a lot of fun.

“Being Green” (also known as “It’s Not Easy Being Green”) is a classic, a pretty and moving song originally sung by Kermit the Frog. It’s strange to think that a puppet delivering a children’s song can bring an adult to tears, but, hey, I know it’s happened. Rena delivers a passionate rendition, this track also featuring some nice work by Shane Kirsch on flute and by Stuart Duncan on fiddle. Then French Stewart and Jason Alexander sing on an absolutely delightful medley of “I’m Pretty” and “I’m An Aardvark,” two short songs from the series. In the show, footage of fish accompanied “I’m Pretty” and footage of aardvarks (no surprise there) accompanied “I’m An Aardvark.” “But who’s to say what looks funny to you might not be simply gorgeous to me.” I think both children and adults are going to totally love this one. “I Don’t Want To Live On The Moon” is another sweet and beautiful number, and another sung by Ernie on the show. The lines that always stand out for me are “There are so many strange places I’d like to be/But none of them permanently.” This version features some gorgeous work by Giovanna Clayton on cello, and by Pat Coil on piano.

Another of my personal favorites is “What Makes Music,” a song celebrating music and inviting people to join along on whatever instrument they might find or make. There is a tremendous amount of joy in this one, a joy you can feel and that will soon be yours as well. And the song has a message that I appreciate. “And music fills the day/Like nothing else on Earth can do/When I’m making music with you.” This one features Cristina Jones on vocals, and also includes horns. The children do a fantastic job here. Jason Alexander joins Rena Strober on “Candy Hearts & Paper Flowers,” a sweet, touching number. “Times get bad and then I worry/How I’ll ever see it through/But candy hearts and paper flowers/Will always keep me close to you.” That’s followed by “Imagination,” another song about the joy of using one’s imagination. It’s a pretty rendition, Rena’s vocals supported by piano.

“What Is Braille?” isn’t a song, but rather a short scene with the children talking about some of the differences in their lives due to being blind. As you might guess, it is quite positive, and also honest. “Sometimes we do things differently, or need to ask for help. But we can do anything if we just believe in ourselves.” That leads to the song “Believe In Yourself,” which was once sung by Diana Ross on the show. This is a cheerful tune with a strong message. “Folks may say you’re different and you’ve gone and lost your senses/But the world is yours to walk in/Go ahead and leap the fences.” This track ends with laughter. Ah, that’s how everything should end, right? That is followed by “To Love A Child,” a sweet number. Cristina Jones joins Rena on vocals for “High Middle Low,” taking the high part. Rena takes the middle part, and Michael-Leon Wooley joins on the low part. This track is a total delight, and features Doug Grean on tuba, and Korey Simeone on fiddle, washboard and banjo. It is certainly one of the disc’s highlights. This special album then concludes with the children singing “One Small Voice,” joined by guest vocalists Marleena Barber and Deborah Grausman. Deborah Grausman provides the voice for a character named Smartie on Sesame Street. “One small voice can teach the world a song.”

CD Track List
Imagine That! The Sesame Street Music Of Joe Raposo & Jeff Moss is scheduled to be released on August 28, 2020.
Posted by Michael Doherty at 7:39 AM