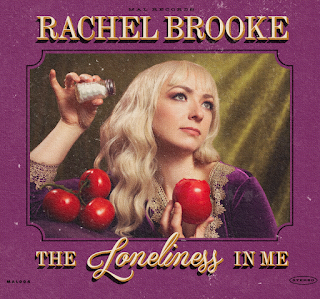 Rachel Brooke is a singer and songwriter based in Michigan, working in the country realm and possessing an absolutely fantastic and distinct voice. There is something timeless about her voice, putting you in mind of some delicious classic country sounds and songs, yet she has her own style. She has released several albums over the last decade or so. Her new release, The Loneliness In Me, features all original material, written or co-written by Rachel Brooke. On this album, in addition to providing the vocals, she plays acoustic guitar and banjo. Joining her on this album are Aaron Graham on drums, Michael Cullen on electric guitar, Dave Feeny on pedal steel, TJ Rankin on bass, Louis Osborn on keys and electric guitar, Nick Carnes on electric guitar, Jeremy West on electric guitar, Liz Sloan on fiddle, Jarrod Champion on piano, and Shawn Densteadt on banjo and electric guitar. James Hunnicutt, Brooks Robbins and Melissa Lakies provide backing vocals.

The album opens with “It Ain’t Over ‘Til You’re Crying,” a song written by Rachel Brooke and Brooks Robbins, who wrote much of this album’s material together. The first thing that hits me is that great classic country sound, and that timeless quality of Rachel Brooke’s vocal performance. I love this line: “You might be a good man, but you ain’t good enough.” And check out these lines: “It ain’t about you, baby, it’s all about me/I lead you around, tethered and bound ‘til you beg mercy.” And is she teasing when she sings that she’ll call the person, “Tell you I love you, but you ain’t worth the fall.” This song slowly fades out, almost like she’s still working on making a decision. That’s followed by “Great Mistake,” in which she sings “I was always chasing rainbows/To me, that never did grow old/While I was chasing some new heaven/Someone stole my pot of gold.” How are those for some perfect country lyrics?  And I love those sweet, ethereal vocals in the background during that guitar lead. Then “The Hard Way” is one of those glorious, slow country songs, Rachel’s voice soaring at moments, then becoming more intimate at other moments. “All of your reasons were sad but true/I was one too many in your spotlight for two.” There is also more gorgeous and moving work from the backing vocalists. This is one of my personal favorites.

The album’s title track, “The Loneliness In Me,” has a more lively country vibe, and is a delight. These lyrics in particular stand out for me: “I ain’t got the time to worry about reality/I’m busy dreaming up tragic potentialities/Always prepared for any trouble unseen/Thanks to the loneliness in me.” There is a lot of joy behind this one, helping to make it one of the disc’s highlights, and plenty of great lines and phrases, like “time is a social construct used to keep us all in line” and “the richest girl in that cemetery” and “in a world of social insecurity.” Plus, this track features some good work on fiddle. That’s followed by “Picture On The Wall,” which has some delicious work on piano. There is something ridiculously appealing about this music. “Your love has gone, but my heart don’t know it yet.” How is that for another perfect country song line?

“It Won’t Be Long” has such a wonderful vibe. And check out these lines: “You prayed all day/You cried all night long/Your sins are not absolved.” Rachel Brooke does some playful stuff vocally toward the end, almost like the country version of scat. Just a bit of it, yes, but it is adorable, and gives the song a bit of an improvised feel. That’s followed by “Ghost Of You,” a sweet and pretty song. There is something of a lonely streak running through several of these songs, related to the album’s title. This entire album is full of excellent lyrics, but these lines in particular stand out: “The ghost of you comes with me/Because of the ghost of you is still mine.” I don’t think I’ve ever heard it put that way, and those lines are perfect. We know just exactly what she means and how she is feeling. Also, I love that pedal steel. Then “The Lovells Stockade Blues” is kind of a playful number. It begins with a reference to “Worried Man Blues” and features some great stuff on fiddle. “Maybe you’re right, it could be true/That I’m where I am meant to be/‘Cause I prefer the torture of my thoughts/They’d never ever lie to me/Not once.” By the way, the Lovells in the title is the town in Michigan where Rachel is based. That’s followed by “Lucky And Alone,” which has more good work on pedal steel. And though it’s a song about being alone, it is not a song about loneliness. “My love can’t be given/It can only be borrowed.”

“The Awful Parts Of Me” has a different sound and vibe when it starts, the way those strings swell. Then that classic western rhythm really takes hold, and Rachel Brooke delivers an absolutely wonderful vocal performance, one of the best of the album. She is adorable as she delivers lines like “Farewell, sweet sanity/You only love, you only love the awful parts of me.” This track also makes use of that spoken word style at one point just before the end: “But you can have it all/Revenge and apathy/You only love, you only love the awful parts of me.” I love it. And after that section, the backing vocalists join her to sing the title line. That’s followed by “Undecided Love,” another of those beautiful slow country songs of devotion and heartache, featuring a moving vocal performance. The album concludes with one of its most interesting songs, “I Miss It Like It’s Gone,” which eases in with some strumming, Rachel’s voice being the focus. Then halfway through, the percussion comes in. That percussion and the vocal delivery remind me a bit of Holly Golightly And The Brokeoffs. Then that “Oooh” vocal part is gorgeous. This track is yet another of this disc’s highlights. “Singing sad songs, still dreaming about wolves/But I miss it like it’s gone/Oh, I miss it like it’s gone.”

CD Track List
The Loneliness In Me is scheduled to be released on October 23, 2020.
Posted by Michael Doherty at 6:50 AM