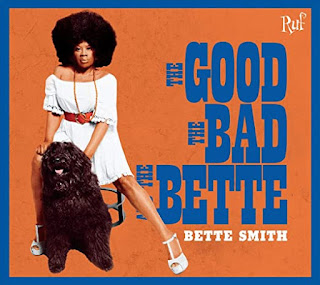 All right, I know we’re not supposed to judge a book – or an album – by its cover, but I just knew from the cover of Bette Smith’s The Good, The Bad And The Bette that I was going to love this album. Seriously, with the film reference and that classic style, you can tell the music’s going to be cool. Bette Smith, who is based in Brooklyn, released her debut album, Jetlagger, in 2017, and is now following that up with a new disc that includes some original material as well as covers. It also features some good guests, including Jimbo Mathus and Luther Dickinson. The album was co-produced by Matt Patton (of Drive-By Truckers), who also plays bass and guitar on these tracks, and Bronson Tew, who plays drums and guitar.

The album’s title, of course, is a reference to The Good, The Bad And The Ugly, a 1966 film starring Clint Eastwood and directed by Sergio Leone. It was the third film in the Dollars Trilogy, the first being A Fistful Of Dollars. And, to add to the fun of the reference, Bette Smith kicks off the album with a cover of Lonnie Shields’ “Fistful Of Dollars,” a song from his 1992 album Portrait. This song has a totally delicious groove, and Bette Smith gives us an excellent rendition. “It’s going to take a fistful of dollars/Or it just won’t do/I need so much money, baby/Just to try to see my way to you.” This track is dripping with cool; in addition to that great groove and Bette’s excellent and energetic vocal performance, this track features some wonderful work on guitar. And then, holy moly, suddenly a horn rises up in the second half. On top of that, the track has a surprising ending with strings. Bette Smith follows that with an original composition, “Whistle Stop,” and her soulful and intimate vocals grab hold of us the moment this track begins. This is beautiful and engaging and just bloody wonderful, a song of goodbyes, written by Bette Smith and Robert Matthew Patton. “Stop that train/And see me again/Stop these tears from the first time you went away.” Toward the end, her vocals take on more force, more emotion. “A whistle stop just to pass me by with a wave” is a heartbreaking line.

Jimbo Mathus (of Squirrel Nut Zippers, whose tour has once again been postponed, by the way) joins Bette Smith for the rocking “I’m A Sinner.” As you might guess, this track is a whole lot of fun. Bette Smith makes sinning sound so damn good. Okay, sinning probably always sounds good, but this track is particularly exciting. I love the ending too, how that guitar gives us just a bit more as things are fading out. Then there is a pause, followed by some acoustic, back-porch playing of “I Felt It Too,” which then leads into a full rendition of “I Felt It Too,” another rocking and powerful tune that comes at us with a great force. “When we came together in the alley, I lost control/I felt it, I know you felt it too.” This has the delirious energy of an early Meatloaf song, particularly with those backing vocals joining on “I felt it, I know you felt it too.” And that electric guitar sure isn’t shy. Yes, this is what it’s all about – the power, the joy, the raw rock and roll vibes. Both “I’m A Sinner” and “I Felt It Too” were written by Tyler Dawson Keith.

“Signs And Wonders” is another cool number, this one featuring Luther Dickinson (of North Mississippi Allstars) on guitar. It was written by John Kveen, and I believe originally included on the Pope Paul And The Illegals album When The Stars Come Hurtling Down, though I can’t seem to find a copy of that release. This song actually gives that album its title in the lines “Don’t you cry when the stars come hurtling down/No need to cower, ‘cause I will be around/And when the continents divide and you’re peering down at hell/Don’t be afraid ‘cause all is well.” This track features some wonderful work on guitar, working to lift us up. Then as the track is reaching its climax, it goes into an interesting section where things are kind of breaking down in order to focus on some key lines and phrases in the lyrics, a nice touch. There is more great energy on “Human,” an original track, written by Bette Smith and Robert Matthew Patton. I love these lines: “When your heart is in pain/Whole world’s up in flames/Ooh, run to me/I want to be your human.” That’s followed by another song written by Bette Smith and Robert Matthew Patton, “Song For A Friend,” one of my personal favorites. From Bette Smith’s fantastic and passionate vocal performance to those delicious backing vocals to the rhythm and overall vibe, this, for me, is rhythm and blues at its best. Everything is working just right here. “She was looking out/When you could not be found/She was right on time/She was a friend of mine/So don’t you mess around/She was a friend of mine.”

So, Matt Patton, in addition to being a member of Drive-By Truckers, is in a band called The Dexateens. And on this album, Bette Smith delivers a good version of  that band’s “Pine Belt Blues,” a song written by Elliott McPherson and John Ashley Smith, and originally appearing on their 2005 album, Red Dust Rising.  “Pine Belt Blues” is followed by a cover of Eddie Hinton’s “Everybody Needs Love.” “Ain’t nobody ever found happiness living their lives all alone/I used to believe I didn’t need nobody/To be happy on my own.” I dig the backing vocalists joining on her on the title line, “Everybody needs love.” You’d think this very quality would be enough to unite people, to remind us that we are all going through this thing together, experiencing the same needs. The album then concludes with a beautiful and moving rendition of “Don’t Skip Out On Me,” which starts with her voice and some soft strumming on acoustic guitar and then builds from there. And when that horn comes in, with its echo, the song goes to a whole other level. This is absolutely wonderful, another of the disc’s highlights.

CD Track List
The Good, The Bad And The Bette is scheduled to be released on September 25, 2020 on Ruf Records.
Posted by Michael Doherty at 7:49 AM