We are several months now into this strange new reality of social distancing and face masks and hand sanitizer, and it seems no end is in sight. In fact, it looks like things are getting worse, and meanwhile the racist tyrant in the White House is signaling his intent to mess with the November election. Fortunately, artists are continuing to release excellent albums to help us through this time. Here are some brief notes on a few new jazz releases you might want to check out. 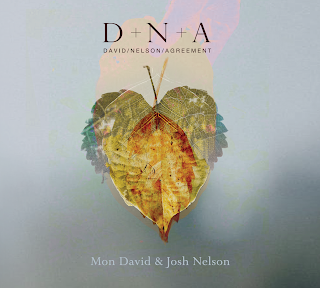 Mon David & Josh Nelson: “DNA” – Vocalist Mon David and pianist Josh Nelson team up to deliver an emotionally engaging album, DNA (which stands for David Nelson Agreement). The first track, “Did I Ever Really Live,” tells the story of life from birth to the end, and Mon David’s vocal approach is largely that of a storyteller, one with wisdom and compassion. “Too soon the time to go will come/And time won’t wait/Is it too late to ask/Did I ever love/Did I ever give/Did I ever really live.” This song depresses the hell out of me, and this rendition really gets on top of me, featuring fantastic performances by both Mon David and Josh Nelson, and a powerfully introspective and honest conclusion. And that’s just the first track. In the following track, “You Must Believe In Spring,” it seems of dire importance for Mon David to convince us to do as the song’s title suggests. Everything about his delivery expresses that need and his concern. It feels that our lives depend on us believing. But don’t worry, these guys also are able to get loose and playful, as on “Devil May Care,” which includes scat, and the medley of “Straight No Chaser/Billie’s Bounce.” This album contains a tribute to Bill Evans. It concludes with a beautiful rendition of “Always And Forever,” written by Pat Metheny, with lyrics by Mon David. This album is scheduled to be released on August 7, 2020. 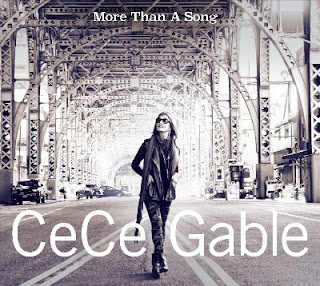 CeCe Gable: “More Than A Song” – Vocalist CeCe Gable delivers some wonderful standards, including a few Cole Porter numbers, on her new album, More Than A Song. Joining her on this release are Roni Ben-Hur on guitar, Brian Landrus on baritone saxophone and bass clarinet, Harvie S on bass, and Sylvia Cuenca on drums. The opening track, “East Of The Sun,” features a nice lead on bass, but it is her rendition of “As Long As I Live,” which follows it, that really pulls me in. There is something sweet and honest and romantic about CeCe’s voice, which works just perfectly here. There is an intimacy that is endearing and adorable, fitting for lyrics like “What if I can’t live to love you/Long as I want to/Life isn’t long enough, baby/But I can love you as long as I live.” That track also features some wonderful work on guitar. That intimate and romantic vocal style is also incredibly effective on “I Thought About You,” another of the album’s highlights. “My Shining Hour” features some really good work on drums. And as for the Cole Porter compositions, CeCe Gable gives us a cool rendition of “What Is This Thing Called Love,” where she is backed by Harvie S on bass, a version of “It’s Alright With Me” that has a good sense of movement and features a fantastic lead from Brian Landrus, and a rendition of “I Concentrate On You” that includes a nice lead on bass. This album was released on July 24, 2020.

Kenny Kotwitz & The LA Jazz Quintet: “When Lights Are Low” – Accomplished accordion player and arranger Kenny Kotwitz pays tribute to Art Van Damme (with whom he studied) on his new album, When Lights Are Low. Art Van Damme would have turned 100 this year. The band here is phenomenal and includes John Chiodini on guitar, Nick Mancini on vibraphone, Chuck Berghofer on upright bass, and Kendall Kay on drums and percussion. The album opens with its title track, “When Lights Are Low,” a sweet and easygoing number featuring some wonderful work on accordion and guitar. And really, the entire album maintains a certain relaxed mood, perhaps exactly what we need these days when we are looking to reduce our stress. Even “Cry Me A River” (a song I still associate with Joe Cocker’s wild rendition) has a wonderfully mellow flavor. The instruments work really together on these tracks, rather than focusing on extended solos, and that too speaks to us strongly in these days of extreme division. Among my personal favorites are “Harlem Nocturne” and “Stairway To The Stars.”  But, really, the entire album works so well to ease tension and take us to a better place. This album was released on August 1, 2020. 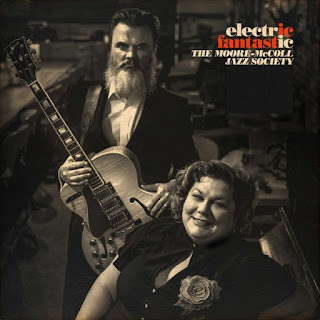 The Moore-McColl Jazz Society: “Electric Fantastic” – Beth Moore and Chance McColl present some lively original music on Electric Fantastic, their debut album. The disc opens with its title track, a hopping and exciting instrumental number featuring some great stuff on keys and a nice saxophone lead. “Like A Symphony” has a mellower beginning, but soon builds in energy. I love the groove on “800 East,” a cool, cheerful number composed by Chance McColl, featuring several good leads as well as a great bass solo. The band gets bluesy with “If You Really Loved Me,” which features some good work on organ and guitar. “I get so blue without you/Without you, I can’t go on.” The album’s only cover is an interesting take on Supertramp’s “The Logical Song,” this track featuring Scott Rasher on trombone. The band is made up of Beth Moore on vocals, piano and organ; Chance McColl on electric guitar and vocals; Joel Morris on drums and percussion; Tim Aucoin on bass; Caleb Lattimore on trumpet, Christopher Alpiar on tenor saxophone, and Declan Ward on alto saxophone. This album is scheduled to be released on August 21, 2020. 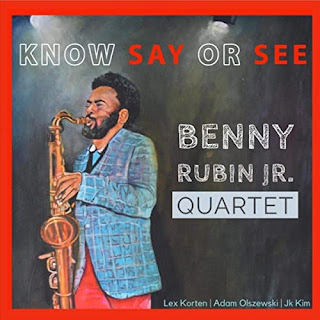 Benny Rubin Jr. Quartet: “Know Say Or See” – From the moment the first track begins with that lone saxophone blowing, calling to us in the darkness, beckoning us, telling us things are going to be all right, I am hooked. And when the other musicians come in, that tune, “Know,” takes on a seriously cool groove. The band here is Benny Rubin Jr. on alto saxophone and tenor saxophone, Lex Korten on piano, Adam Olszewski on bass, and JK Kim on drums. That first track and most of the others are original numbers, composed by Benny Rubin, Jr. “Know” is followed by “Say,” which features some wonderful and wild work on piano. And if you think “Say” must be followed by “Or See,” well, no, you have to wait a bit for the track that finishes the album’s title. In the meantime, you get the intense “Flint Water Crisis” and the delicious “Down They Go,” the latter beginning with a cool bass solo, as well as two covers, a sweet, romantic rendition of Jimmy Van Heusen’s “Darn That Dream” and a fun take on Horace Silver’s “Kiss Me Right.” This album was released on June 8, 2020.
Posted by Michael Doherty at 7:41 AM