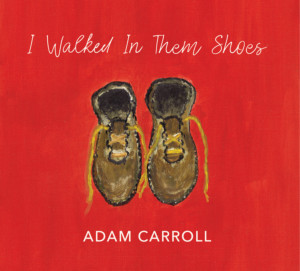 Singer and songwriter Adam Carroll has released several albums over the course of the past couple of decades, and in 2016 his songwriting was honored with a tribute album, Highway Prayer: A Tribute To Adam Carroll, which featured artists like James McMurtry and Slaid Cleaves covering his songs. Now Adam Carroll is releasing a new studio album, I Walked In Them Shoes. On this release, Adam Carroll plays guitar, harmonica, harmonium and keys, and is accompanied only by Lloyd Maines on pedal steel, rhythm guitar and slide guitar, so the album is basically voice and guitar. At the beginning of each track, Adam introduces the song, simply stating the song’s title, which is an interesting choice, giving the disc something of the feel of a live album, like he’s performing for us in our own homes and letting us know what he’s going to play next.

The album opens with its title track, “Walked In Them Shoes,” an excellent song which has a friendly and wonderfully uplifting vibe. These days we could all use a bit of optimism, and this song expresses it in lines like “Lord, you know we can make it through/Got to carry the load over the bad times.” Adam Carroll’s voice is perfect for telling stories, and you get the sense he has a lot he could tell. “Well, I’ve come from faith-healers, tramps and bootleggers/It’s a long road, but I’m not afraid to die.” The title track is followed by “Caroline,” which begins with a somewhat darker sound and the line “You said romance is for suckers.” But when that sweet pedal steel comes in, the tone changes, becoming lighter. “Is it all that you can do to see the ending of the day?” There is movement, travel, in these songs, and yet there is a strong feeling of home in the music, like a place you can rest, get cozy, and feel loved. It’s wonderful when a musician can provide that in his or her songs.

“Storms” is a sweet folk song about storms, both actual and metaphorical, mentioning the hurricane that devastated Puerto Rico (“As I lay down to go to sleep, they’re still struggling with that storm”).  Check out these lines: “Thunder wakes me up from another dream/Well now, nothing lasts forever/You’d better hang on to what you’ve got/Seems everybody’s seeing red/Left and right, and getting hot/Well, I can’t hold out much longer/’Cause this weather’s not the norm/I don’t care if you’re a Democrat/If you save me from this storm.” There is a bit of humor to those last lines, but he’s certainly not joking about the weather not being normal. Climate change is the single biggest problem facing us, and we are suffering through an administration that pretends not to believe in it. “Well, one thing I can say for sure is we’re all weathering the storm.”

“Crescent City Angels” features some nice work on harmonica at the beginning. This song has something of a Townes Van Zandt vibe, which of course I appreciate. And how bloody good is this line: “Taking everything we threw away and all we tried to keep.” Yeah, Adam Carroll can write and deliver a fantastic lyric. It’s no wonder that other artists are covering his material. Interestingly, Caroline shows up in the lyrics of this song too. The lines from “This Old Garage” that stand out for me are “Well, she’s all cleaned up now, she’s not what she used to be/When I see her face, I wonder what’s happened to me.”

On “Cordelia,” Adam Carroll makes his brief introduction not before the song, but a couple of seconds into it. I go back and forth on which is the best Shakespeare play, Hamlet or King Lear, but more often these days I’m choosing King Lear. So of course seeing there’s a track called “Cordelia” got me excited about this album. And yes, this song uses imagery and words that make us think of Lear: “I am a king when you are around,” “I am a stranger without a home/And you are a soldier, but you won’t forget me,” and “When you call my name, I know I can’t fool you/Deep in my heart I still wander around.” It is thought that the actor who originally played Cordelia also played the Fool. This is a wonderful song. It’s followed by “My Only Good Shirt,” a kind of funny, delightful folk tune, one of those songs about being a traveling musician. “I’m not ‘Viva Las Vegas,’ but I’m Motel 6 famous/And they’ll always call me by name.”

“The Last Word” is a beautifully sad song of regrets and some wisdom. “Neither you nor I will win/No matter who gets the last word in.” And check out these lines: “There’s this record I have in my head/That I keep dying to replay/Dreamed you were lying down next to me/But when I woke up, you’d gone away/And I tell you it’s a sin/’Cause I really should have said it all back then.” And at the end there is a playful reference to politics in the line “You and I will never yield the Senate floor.”

CD Track List
I Walked In Them Shoes is scheduled to be released on April 12, 2019.
Posted by Michael Doherty at 4:12 PM