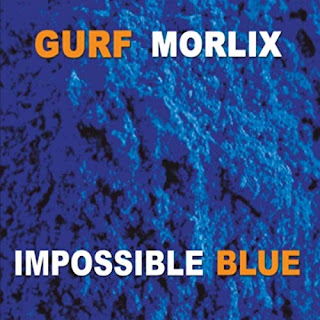 Gurf Morlix is a singer, a guitarist, a songwriter, and a music producer, based in Austin, Texas. You might know him from his work with Lucinda Williams. Since then, he’s been doing solo work, releasing ten albums in the last couple of decades. His new release, Impossible Blue, contains all original material, excellent and interesting bluesy tunes with some seriously good lyrics. Gurf Morlix plays guitar, bass, keys and percussion on this album. Joining him are Red Young on organ, Rick Richards on drums, and Jaimee Harris on backing vocals.

The album gets off to a good start with “Turpentine,” a cool blues tune (with just a bit of a “Good Morning Little School Girl” vibe, right?). It’s a blues love song, at least at first, with lines like “Your voice is like honey from the hive/And your touch, I swear, it made me come alive.” Oh yes, how great is that? To feel that, or to be told that? But then he says “But your kisses taste a little like turpentine” and she is talking all the time, saying things that “unsettled my mind.” So things aren’t perfect. But that just makes it a more honest song, you know, as sometimes things aren’t all good or all bad. One thing that is certainly all good is that work on organ. “Turpentine” is followed by “2 Hearts Beating In Time,” which features an intimate vocal performance. “There’s a bit more I want to do/Left unfinished, a thing or two/I’m going to duck, but before I do/I just want to breathe beside you.” This somewhat low-key track keeps things simple, letting the vocals drive the song. Then “My Heart Keeps Pounding” has more of a driving rhythm, in the drum beat, but also in the vocal line. The song alludes to a heart attack he suffered a few years ago. “These are forces beyond our control/Implosion, explosion/Starting, stopping, opening and closing.” Life is confusing, fragile and wild, and this song somehow communicates all of it.

“I’m A Ghost” is an interesting song, with an unusual perspective, as you might surmise from its title. It has a cool (and yes, haunting) vibe, with that percussion and that nice work on guitar. A frustrated ghost watches as justice goes awry. “You brought my world crashing down on me/There stands a prisoner who committed no crime/There sits a judge wasting time/I can’t say nothing, I can’t appear/I’m a ghost, and I was never here.” Then “Sliver Of Light” has a more standard blues sound, but some excellent lyrics. These lines in particular stand out: “I might bring a tear or a smile to your face/As we slog our way through the traffic jam of the human race.”

“Bottom Of The Musquash River” is an arresting song about a woman drowning, opening with the line “Yeah, the bottom is down there somewhere,” a line that grabbed me. It’s a powerful song, and part of its power lies in the simplicity of the sound, that steady, sparse rhythm. “Life is twisted by forces unknown/And my love sank like a stone.” This one really got its hooks into me, and is one of my personal favorites. “Now I’m obsessed about the help I couldn’t give her.” That’s followed by “Spinnin’ Planet Blues,” a cool, slow, bluesy tune, and one I bet a lot of folks will be able to relate to. After all, don’t we all have the “Spinnin’ Planet Blues” at this point? We all feel like we’re losing. “I’m an outcast out here on the fringe/My existence is swinging on a rusty hinge/The sad corners of your mouth are all I can see.” As serious as this song feels, at the very end, there is a surprising and playful reference to The Jetsons. Then “I Saw You” portrays a distraught and jealous heart after a breakup. “I saw you yesterday/And you never looked my way/Frozen in time, to my dismay/I saw you yesterday.” You certainly feel for him as he sings, “You didn’t feel me, but all I felt was you.” This is an effective, strong track. The album then concludes with “Backbeat Of The Dispossessed,” another moving track, a kind of eulogy delivered with affection. “Drove as far as you could go/Only stopped when you ran out of road/What you were looking for, you didn’t know/The sky above and the dirt below.” It ends with an odd, unexpected nod to “Michael, Row Your Boat Ashore” (a song that always takes me back to my very early childhood). Lines from “Backbeat Of The Dispossessed” give the album its title: “Can’t imagine the impossible blue/Running deep inside of you.”