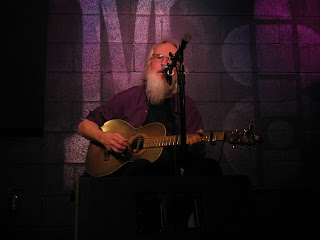 One of my favorite places to see a concert is McCabe’s in Santa Monica. The sound is always good, and the crowd that gathers there is respectful – a listening crowd, you know? It’s a good venue to see an artist for the first time, for you can hear every lyric, and have an intimate experience. And that’s where I saw my first Gurf Morlix concert last night. Yes, I admit I arrived a bit late to this particular party, for his music career has been going strong for decades, from his time with Lucinda Williams to his solo career. I’m sure I heard his work with Lucinda, but it was his new album, Impossible Blue, that really turned me onto his music. If you haven’t heard it yet, I definitely recommend checking it out.

As you are probably aware, McCabe’s is a guitar shop during the day, before it is transformed into a concert venue after dark, and guitars line its walls. There were even four guitars hanging on the wall at the back of the stage. One of those guitars had a yellow guitar strap with the words, “Police Line Do Not Cross” on it, which made me smile. And it was this guitar that Gurf took down when he stepped onto the stage just after 8 p.m. He thanked the crowd for coming out, joking “It wouldn’t be the same without you.” Then he began his first song of the night, “Deeper Down.” As I mentioned, the audience at this venue pays attention, and the folks last night clearly appreciated the lyrics to this song, chuckling appreciatively at certain lines, like the one about the stolen shovel and “Your love, such as it was, has taken its toll.” Man, Gurf Morlix can write a good song. And he can also deliver it. By the way, he performed solo on acoustic guitar, providing his own percussion accompaniment with his feet.

After a joke about bad driving, he followed “Deeper Down” with “Blue Smoke,” the line “And your pistons may be blown” eliciting a laugh. But the line from this song that stands out for me is “I love you, but I miss you, even when you’re standing next to me.” What a line. Gurf then mentioned his new album, joking that it made Rolling Stone’s list of the best ten thousand albums of the year so far. He played several tunes from the album, beginning with its lead-off track, “Turpentine,” giving us some cool, bluesy work on guitar. He followed that with “2 Hearts Beating In Time,” first providing a sweet introduction about experiencing his heart beating with that of another. (I wish my girlfriend could have attended this concert with me.) Gurf Morlix established a good, easy rapport with the crowd, and told several stories last night, including one about his heart attack. He started that one with some words about Tom Petty: “I think he had the integrity that all artists should aspire to.” And, yes, it came back around to Petty at the end, with “Won’t Back Down” playing in the hospital as the doctor was finishing a procedure. Gurf can certainly tell a great story, and that story served as introduction to “My Heart Keeps Poundin’,” another song from the new album.

After that song, he asked for a chair, and a guy in the row in front of me handed him the chair next to him. Gurf performed the rest of the set seated, beginning with another song from the new CD, “Backbeat Of The Dispossessed,” a song about a friend of his that had committed suicide. This one nearly had me in tears last night. He followed that with “50 Years,” which also affected me more strongly than I expected it to. Perhaps that’s because it’s been nearly thirty years since I graduated high school. Dear lord. After “Bottom Of The Musquash River,” Gurf Morlix talked about how he used to play with Warren Zevon, leading to him delivering an excellent cover of “Roland The Headless Thompson Gunner.” Some excellent guitar-playing received appreciative applause from the audience. He followed that with a cover of “The Massacre Of Glencoe,” then “Voice Of Midnight,” a sweet and sad and beautiful song. He concluded his set with two more covers – The Blind Boys Of Alabama’s “The Last Time” and the traditional Scottish song “The Parting Glass.” The show ended at 9:42 p.m. It was an absolutely wonderful show from beginning to end, and I left the venue feeling relaxed, cheerful and even optimistic. Sometimes music can do that for you, putting you back in touch with the better elements of humanity.

Set List
McCabe’s is located at 3101 Pico Blvd., in Santa Monica, California.
Posted by Michael Doherty at 10:01 AM