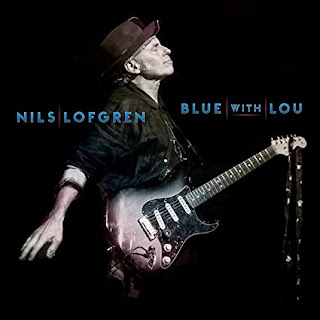 Blue With Lou, the new CD from Nils Lofgren, is an exciting release for a few reasons. First, this is Nils Lofgren’s first new studio album in like eight years. Second, several of the songs on this album were co-written by Lou Reed, even longer ago, songs just waiting for this moment to see the light of day. But the third reason is the most important – the material is seriously good, with energy, with bite, with drive, and with some excellent lyrics. Backing Nils on this release are Andy Newmark on drums and Kevin McCormick on bass, as well as several guest vocalists.

The album opens with “Attitude City,” a good rock tune with a blues edge and some cool, soulful backing vocals by Cindy Mizelle. Though the lyrics are delivered with power and attitude, there is a playful side to this song, obvious from the reference to John Travolta’s character in Saturday Night Fever. This track was co-written by Lou Reed. It is followed by another of the tracks co-written by Lou Reed, “Give.” I seriously dig the vibe of this song right from the beginning. This track features more wonderful vocal work from Cindy Mizelle and a groovy bass line. And check out these lines: “Donate half your brain to science/Preserve your eyes in alcohol/Keep your balls refrigerated/You never know who needs it most.” This is one of the album’s best tracks, and it becomes a good jam featuring some excellent stuff on guitar.

“Talk Thru The Tears” has a sweeter vibe with something of a classic feel, both to the sound and also the lyrics. For example, its first line, “Smile though your heart is breaking,” will remind you strongly of the first line of Nat King Cole’s “Smile,” “Smile though your heart is aching” (a song originally from Charlie Chaplin’s Modern Times). The backing vocals have an interesting sound as well, reminding me of some old recordings. On this track, the backing vocals are provided by Kenny Miller, Josef Curtis, Jason Raetz and Toby Kidd. And though I despise the misspelling of “Through” in the title, and though this track employs that awful “self”/”shelf” rhyme, I really like this song. It was co-written by Lou Reed. That’s followed by the first of the album’s tracks not co-written by Lou Reed, “Pretty Soon.” There is something beautiful and moving about this unusual love song. Here is a taste of the lyrics: “Take my damaged heart/Run it straight back home to you/You were always right, baby/Pretty soon is now/I’m on a plane home, sweetheart/Don’t ask me how.” This is another of my favorite tracks.

Branford Marsalis joins Nils Lofgren on tenor saxophone on “City Lights,” helping to make it another stand-out track. While “Talk Thru The Tears” has a connection to Charlie Chaplin’s Modern Times, this one directly refers to Chaplin in its lyrics, and its title comes from the title of a Charlie Chaplin film. The song has a reggae vibe and a sweetness. It was co-written by Lou Reed, who included his own rendition on his 1979 album, The Bells. That album featured a few songs written with Nils Lofgren. That same year, Nils Lofgren included a couple of tracks written with Lou Reed on his LP Nils. The rest of their collaborations were left unrecorded until now. “Charlie Chaplin’s cane/Well, it flicked away the rain/Things weren’t quite the same/After he came here/But then when he left upon our own request/There was no humor left after he left here.” “City Lights” is followed by the album’s title track, “Blue With Lou,” a bluesy rock tune with a steady groove and some good lyrics. “Sick of burying friends and heroes, every fear I feel/Gonna tango in the madness, find an inner flame to burn or heal/World peace fantasies, like flirting with a corpse.” The song is obviously about Lou Reed, its lyrics containing a reference to “Walk On The Wild Side,” but it is the guitar work on this track that really grabs me. Nils Lofgren’s wife, Amy, is one of several backing vocalists who join him on this one. Amy Lofgren also produced the album with Nils.

“Too Blue To Play” is a moving and pretty song, the backing vocals taking it to a different and unexpected place, sort of like old country ballads. This effective track also features some nice work on guitar. “In your anxious arms real hope burns/Sure feels awful close to grace/Let’s live the hurt off/Until there’s not a trace.” That’s followed by “Cut Him Up,” the last of the album’s tracks co-written by Lou Reed. “Out to have a good time/See that dude runnin’ pain/Like a powder monkey/Out to have a damn good time/Lie all you want, man/I’ll never be your junkie.” Then “Dear Heartbreaker” is a really good song written in tribute to Tom Petty, with nods to Petty’s work in lines like “There’s a full moon and a red sun” and “No, he’s not backing down.” This track features more excellent vocal work by Cindy Mizelle. “Let the rip in my heart fill with music.”

CD Track List
Blue With You is scheduled to be released on April 26, 2019 on Cattle Track Road Records.
Posted by Michael Doherty at 3:28 PM