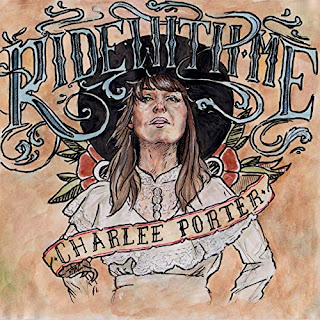 Charlee Porter is a talented singer and songwriter based in Stockholm, Sweden, working in the country music realm. In 2008, she released her debut self-titled full-length album, and followed it up with Heartstrings. And then several years passed without a new album. That was until late last year, when Charlee Porter delivered Ride With Me, an EP featuring all original material. Joining her on this release are Per Bergkvist, Per ”Flamman” Westling, Mats ”Gaffa” Karlsson, Jesper Andersson and Fredrik Moberg.

Ride With Me opens with its title track, a gorgeous country song in which she urges us, “Come on, take this ride with me.” Hers is one of those voices that is just perfect for country; it’s beautiful and moving and friendly. “Because we dream of a little bit more in life, you and I.” This song has such a good feel about it, a song with an optimistic, positive sound, and I for one am ready and eager to take this ride with her. Charlee Porter follows that with “Oh Man,” which has a bit of a pop vibe, a full sound, and a really good and varied vocal performance. “It’s like giving in, not giving up.” I also really like that guitar part in the second half of the track.

“Damn You For All The Heartache” features a delicious, classic country sound, and is about a somewhat troubled relationship. Charlee certainly has a voice to make it work perfectly. I love this track. “I’ve been trying hard, hard to fix me/You say, ‘Hey, woman, you ain’t never getting it right.’” The EP then concludes with “On A Porch,” a lively number with a driving rhythm, about sneaking out of a home, out of a relationship. “I’m waiting for the sun to rise/Waiting for the morning light.” Oh, has leaving ever sounded so positive? We know from the sound of this song that she’s going to be all right. And maybe the same will be true for the rest of us. All of us here in the United States are waiting for the sun to rise, for the darkness to end so we can leave a certain horrible man far behind.