Josh Lederman And The Cambridge-Somerville All-Stars at The Plough And Stars, 4-13-19 Concert Review 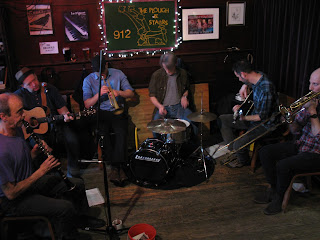 Whenever I go back to Boston, I make it a point to see Josh Lederman And The Cambridge-Somerville All-Stars. They play from 4 to 6 p.m. on alternating Saturday afternoons at The Plough And Stars in Cambridge. While this band is always good, and always interesting, their show on April 13th was particularly special for it was part of the venue’s fiftieth birthday celebration. Perhaps it was the occasion, perhaps it was because their first set was filmed, perhaps it was an alignment of celestial forces, but Josh Lederman And The Cambridge-Somerville All-Stars delivered what I think was the best show they ever performed.

The nature of the band is that its configuration is always different, depending on who is available to play on a given Saturday. Apart from Josh Lederman on guitar and vocals, there is no concrete lineup. And this is by design. So the songs maintain a fresh quality, and even a song they’ve played for many years can hold surprises. At this particular show, the music had something of a New Orleans vibe, due to the absolutely delicious horn section driving the tunes. Clarinet, trumpet and trombone, with bass and drums keeping the grooves moving.

That entire weekend, The Plough And Stars was celebrating its fiftieth birthday, and a man was there to document it all on video.  His presence might have contributed to the energy of the show. Also, spring was finally present in Boston, and Josh seemed to derive some energy from that as well, especially on a song like “Summer Days,” which felt exciting and bright and joyful. That was followed by a fun rendition of “Will I Miss The City?” Again, that New Orleans vibe was wonderful. You could just imagine this version of the CSARs marching down Bourbon St., with women flinging beads at them. At one point, Josh said, “Let’s do a Gershwin tune,” something that got me excited. And Mark Chenevert on clarinet led the band into a bit of “Rhapsody In Blue.” They also did a ridiculously fun rendition of “Long Way From Home,” with some fantastic stuff on trumpet. “Step It Up And Go” got folks dancing.

The second set was perhaps just a touch mellower (maybe because the documentarian was no longer present?), but with a lot of humor. For example, whenever the crowd would applaud a horn solo, Josh would chime in, “Thank you,” as if all applause were directed at him. And at the end, Josh said they would do one more song. He asked, “What do you want to hear?” After the briefest of pauses, getting no immediate request, he said: “Nothing? Okay, good night.” Of course, they did play another song. What an excellent two hours of music! Even the Red Sox losing could not dampen anyone’s spirits that Saturday afternoon. 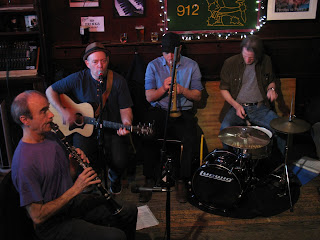 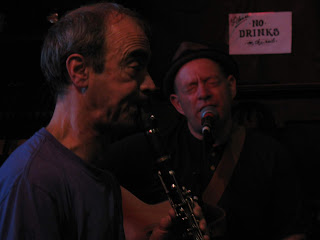 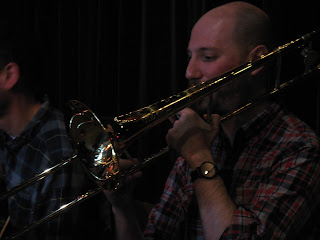 The Plough And Stars is located at 912 Massachusetts Avenue in Cambridge, Massachusetts.
Posted by Michael Doherty at 1:32 PM