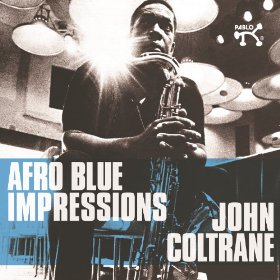 John Coltrane’s Afro Blue Impressions was originally released in 1977, ten years after Coltrane’s death. This live double album features music from concerts in Berlin and Stockholm in the fall of 1963. Joining Coltrane are McCoy Tyner on piano, Jimmy Garrison on bass, and Elvin Jones on drums.

Now fifty years after the recordings were made, Concord Music Group is releasing a special re-issue, including three bonus tracks not included on the original album. This disc also celebrates the 40th anniversary of Pablo Records. Most of these are tracks are original compositions by John Coltrane. There are two exceptions, including, notably, “My Favorite Things.” There is a second version of this tune included in the bonus tracks.

Afro Blue Impressions kicks off with “Lonnie’s Lament.” At the beginning of this track, John Coltrane’s saxophone seems to be expressing a genuine sadness while the other musicians are trying other things beneath him. Then the song finds a great groove and McCoy Tyner takes the lead spot on piano. The band is really tight during this section, rising to some powerful heights, and expressing a force. Elvin Jones lets loose on the drums at key moments. When Coltrane comes back in, the emotion of his horn has changed. There is something looser, wilder, even needier in a way. And there is a moment when Tyner and Garrison bow out, and Coltrane explores in a seemingly manic way over some interesting playing by Tyner on drums. It’s fantastic.

“Naima” begins with a few nice sustained notes by Coltrane, and the others come in. And when Coltrane bows out to let Tyner lead, the song has a very mellow feel, though with some interesting accents by Jimmy Garrison on bass. But the tune embraces a sort of bridled chaos within that frame. And that’s when Coltrane comes back in, rising above, playing above, then at moments getting caught, as if by the others, particularly by Jones on drums. (Listen to the fourth minute, for example.) The song then relaxes at the end, and its conclusion is actually pretty.

There is a second version of “Naima” in the bonus tracks. This version was originally included on The European Tour (1980).

I have never seen The Sound Of Music. One of my friends thinks this is the worst thing about me. I hope she’s right. But of course I’m familiar with a lot of the music. It’s inescapable, particularly “My Favorite Things.” But I kind of wish I’d never heard it, so I could appreciate Coltrane’s version as a totally fresh piece of music and not have the lyrics running through my head. Impossible, I suppose. Yet, this is a wildly enjoyable track. Check out that moment just before Coltrane yields the lead to Tyner. It’s amazing. This group finds so much life within this song’s structure, enough to fill twenty-one minutes. Yes, it’s pretty awesome.

A second version of this song is included in the bonus tracks. This version is quite a bit shorter (though by no means a short track, at just under fourteen minutes). The moment when Coltrane comes back in around the eight-minute mark is astounding. This track was originally included on the box set Live Trane: The European Tours (2001).

“Afro Blue,” which makes up the first part of the album’s title, is one of my favorites. It has a well-defined groove and structure, and an undeniable intensity that just grabs you, even outside the wild lead sections by Coltrane. And then in those lead sections he is scaling mountains and scratching at the sun. There are also some deliciously quiet moments toward the end.

“I Want To Talk About You”

The second cover song on this album is Billy Eckstine’s “I Want To Talk About You,” a tune with a certain romantic air about it. It’s quite pretty, and actually when John Coltrane first races along on his saxophone it seems a bit out of place, or disjointed. But mostly his playing is beautiful. Five minutes in, he performs a solo, which is wonderful. The other musicians don’t come back in again until the very end.

There is a second, slightly longer, rendition of the tune in the bonus tracks. John Coltrane solos in this version too, and actually his solo is longer here. This was originally included on The European Tour.

The track that makes up the second half of the album’s title is “Impressions,” and early on this tune gets into some very interesting stuff on piano, with Garrison adding his own great line on bass. And Jones keeps things manic on the drums. It’s a bit crazy, even messy, but excellent. Five minutes or so into the song, Coltrane comes back in, holding things together, then leading the others off into different territory. There’s a cool section where it’s just Coltrane and Jones on drums. Coltrane at one point seems to be having a conversation with himself, like a call and response, but it’s just him.