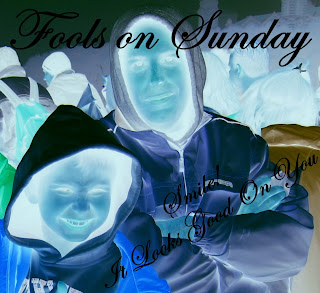 In 2010, Fools On Sunday released Fidelitorium Recording Sessions, a four-song EP that had a certain Led Zeppelin influence on at least two of the tracks. The band’s new EP, Smile! It Looks Good On You, actually features a Led Zeppelin cover, “Heartbreaker.”

Fools On Sunday was formed by the father and son team, Marc Seligman and Evan Seligman, along with Stuart Lederer. Then in 2011 when Evan was fourteen years old, he released a solo six-track EP, Fidelitorium 7-11 Recordings, on which he played basically all of the instruments himself (except for bass on two tracks, where Marc filled in). He also wrote the material, with the exception of “Sheena Is A Punk Rocker,” a Ramones cover.

The new EP finds Fools On Sunday now as the duo of Marc Seligman and Evan Seligman, with Marc providing vocals this time around. In addition to vocals, Marc is on bass, as well as on marching drum on the opening track. Evan plays all other instruments.

Ready For The Set (Theme From JAM)

The EP opens with “Ready For The Set,” a seriously groovy, fun instrumental tune. This is truly a nice little jam that actually had me dancing in my apartment, mostly because of the great bass line and the cool rhythm on drums. The guitar then acts sort of like a voice playing over that rhythm. Then approximately two and a half minutes in, the tune changes, taking on a bit of a harder edge, due to the guitar suddenly becoming more prominent. It ends soon after that, and I’d actually love to hear a longer version, with an extended guitar lead and then a return to the basic rhythm. This is my personal favorite track.

I got really into Led Zeppelin when I was a kid. We all did. And so when we started learning our various musical instruments and getting together to play, it seemed inevitable that at some point in the session we’d turn to Led Zeppelin. I usually didn’t mind, as I played drums, and generally those songs are a lot of fun to play on drums. Often it was “Heartbreaker” that the guitarists like to play. And yet, I never heard anyone do it quite like the version on this EP.

Fools On Sunday’s version of “Heartbreaker” is a very different take on the Zeppelin song. It has a totally different feel. The lyrics are delivered in a spoken word style, almost like rap (but not quite), over a kind of easy groove. The groove gives the song a bit of a funky edge. There are a few lines added to the beginning of the song: “Come on now/Oh yeah, let’s get real/Can you feel it/Jack and Jill went up the hill to fetch a pail of water/But we know what went on up there, because down came the daughter.” Toward the end, they pick up the pace a bit.

The EP’s final track, “Pondering The End,” is a strange tune. It comes on with a good thumping beat, and then the lyrics are done as spoken word. Oddly, the song’s first several lines are aimed at teenagers in school: “First message is for the kids/You need to do well in school/Do well in school and make your own decisions in life/If you don’t, then someone else will make those decisions for you, and you’re not going to like them/The next question is always why must you take trigonometry when you know you won’t be using it in life.” The song returns to teenagers later in the line, “Kids, show your parents a better report card.” Like I said, it’s an odd one. The vocal delivery actually reminds me just a bit of King Missile.

The song is really delivered like a lesson, or sermon, over a steady groove. It’s unabashedly heavy-handed. The lesson, which is aimed at adults as well as children, ends around the three and a half minute mark, and after that the groove continues for another minute or so.

Smile! It Looks Good On You was recorded and mixed by Mitch Easter.

Posted by Michael Doherty at 1:58 PM