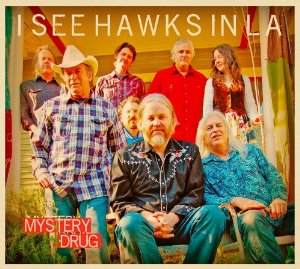 In March of 2012 I See Hawks In L.A. released New Kind Of Lonely, which was one of my favorite CDs of the year, and probably the best album the band had ever recorded. Now they’re following it with Mystery Drug, which has something of a similar feel. That is, it’s a heavily acoustic album, focusing on the vocals and songwriting. And this is another great batch of tunes, all original compositions.

Not all of these tracks are mellow, however. Check out the energy on “My Local Merchants.” This band combines folk, country and rock, with modern sensibilities and subjects but with a deep knowledge of and respect for tradition. So they really create their own distinct sound and world. They even have a song about buying a ride cymbal. I can’t think of a single other song on this subject. This is one of the tunes that is more in the rock vein, with a Rolling Stones reference. And then a song like “Tongues Of The Flame” has quite a different feel. It also has the line, “Who knew of the past, but not history,” which I love.

Rob Waller is one of my favorite singers these days. He has such a great, emotional voice that feels both friendly and experienced. Like an old friend that is often on the road and drops in occasionally late at night with tales both funny and sad. It’s a beautiful country voice, a voice that does not sound like a typical Los Angeles voice, and yet these songs are steeped in L.A. details and atmosphere. And perhaps that’s not a surprise, as the city is part of the band’s name. Just listen to “If You Remind Me,” in which he sings about first meeting someone at the corner of Gower and Sunset. And in “Stop Driving Like An Asshole,” they mention the 405 highway (a road I do my best to avoid).

The album opens with “Oklahoma’s Going Dry,” which has a sweet country-folk vibe, Rob Waller’s vocals possessing the right melancholy quality mixed with hope. His vocals also rise to certain heights at key moments. “Now we pray for rain/Dig our wells a little deeper/There ain’t nothing we won’t try/Oklahoma’s going dry.” This is a wonderful, moving track to open the album.

The CD’s title track begins as a quiet acoustic tune, with the focus on Waller’s vocals over some really nice work on guitar. The lyrics are anything but usual for a folk tune, and show a certain sense of humor: “I am a lonely primate/Craving drugs to soothe my mind and body,” and then “I am a lonesome pirate/Sailing these old pirate seas with other pirate men/We’re not friends.” The song takes on a brighter, more eager tone on the repeated lines, “Where did you find it/That’s what I want to know.”  This song, like most by this band, also features a nice blending of vocals.

There are more sweet vibes and great vocals on “Yesterday’s Coffee,” one of my personal favorites. This one has a sort of 1970s feel at times. Here is a taste of the lyrics: “Yesterday’s romance/Just like a slow dance/Ended too soon/Now you call the tune/Nobody’s sleeping/Chamomile’s steeping.” And I love these lines: “Don’t say you miss me/I love a mystery.”  This track also features some excellent work on pedal steel by Rick Shea.

As for “We Could All Be In Laughlin Tonight,” this country tune mentions that song all musicians and concert-goers can’t ever quite escape, as it’s always on the lips of some silly bastard in the audience. I’m talking, of course, of “Free Bird.” The line is, “Before you play ‘Free Bird’ don’t forget to ring the bell.” My favorite line, however, is “Jump off the cliff and turn right.” This song was written by Rob Waller, Paul Lacques and Paul Marshall.

“One Drop Of Human Blood” is a very cool folk tune about a ritual at a wedding. Some nice work on accordion by Richie Lawrence adds a sweet sort of celebratory vibe to the song.  “A raven wandered far from home to witness the deed/One drop of human blood.”

“If You Remind Me” is an interesting nostalgic love song recounting the tale of how a couple met, the chorus being the line “If you remind me.” The backing vocals in the chorus give this country song a bit of an early 1960s pop feel. “And when I come to my last page/When I’m lost in a far-off gaze/Don’t let our sweet thing slip away/I won’t forget if you remind me.” It seems to be about more than one love, for at one point he sings about how they first met at Gower and Sunset in Los Angeles, but in the beginning he mentions how she rode on the handlebars on his bicycle down Mission Blvd. in San Francisco. Perhaps he wishes to be reminded of all of his romances. Pete Grant adds to the song’s sweet atmosphere with some gorgeous work on pedal steel.

“Stop Driving Like An Asshole” is a short and direct song that opens with the lines, “Stop driving like an asshole/You know who you are/Did you think when you cut me off/It would help you go farther/You’re an accident waiting to happen/A flipped over SUV.” The bit about the angels singing makes me smile every time I listen to this one. And the ending is great. By the way, if you live in Los Angeles and you’re driving slowly, get the fuck out of the left lane. Thank you.

Mystery Drug ends with “The River Knows,” a great folk tune featuring Rick Shea on pedal steel. I love how this song takes its time. It kind of pulls you in and sweeps you along with its travels. It has a pleasant, easy vibe that I just love. “I am craving swift cold water.” As it fades out, it sort of leaves us behind (which makes me want to start the album over again).

Mystery Drug was released on August 20, 2013 through Western Seeds Records.
Posted by Michael Doherty at 2:20 AM