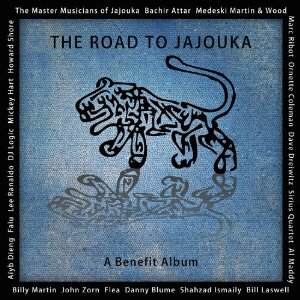 The Road To Jajouka is one of the most interesting and at times beautiful discs I’ve listened to this year. It’s a collection of music by The Master Musicians of Jajouka led by Bachir Attar, with lots of additional help from some well-known musicians such as Flea, Mickey Hart and Ornette Coleman. This is music from a village in the mountains of Morocco, with the traditional sounds intact and celebrated. The music is unique to that area, and is passed down from generation to generation.

The Road To Jajouka is a benefit album to help preserve and keep the music of Jajouka alive, and will provide health care for the musicians and their families. Close your eyes, and this music (or certain tracks, anyway) will transport you.

The first moments of "Hand Of Fatima" are almost eerie – but very quickly this track attains a beauty. And then a good drum beat comes in by Billy Martin. It’s so interesting to mix a somewhat modern beat with the otherworldly traditional sounds of the Master Musicians. What is surprising is how well it works. It doesn’t feel like one form was artificially tacked on to another. And yet this (as the other tracks) was recorded in various places at different times. This track includes a spoken word section by Bachir Attar – which is from the from Jajouka, Something Good Comes To You.

I was a huge Grateful Dead fan, and got to see Mickey Hart and Planet Drum in the very early 1990s. Mickey is a drummer who seeks (and finds) inspiration from all places on this planet, from all cultures and musical genres. So it’s not all surprising to find him involved in this project. It’s natural. What’s somewhat surprising is the combination of his sound with that of DJ Logic. So this track, "Baraka," is more in the electronic realm than most of this collection’s tracks.

“Djebala Hills” is one of my favorites. This is so beautiful, so exotic, particularly due to the vocals by Falu. This track transports you out of your normal realm. It gets your mind working on levels it’s likely unused to. And it features Flea (from Red Hot Chili Peppers) on bass in the second, wilder section of the song. The journey this song takes is incredible and surprising. I absolutely love this music. Turn this one up and let it take over.

“Ghaita Blues” has a great groove on bass and drums, a groove that changes and feels like it’s slinking through the city alleys at night. The traditional instruments play over this groove, creating a great juxtaposition that makes the familiar seem unfamiliar. Or perhaps the other way around. Either way, it’s an interesting atmosphere. By the way, that’s Dave Dreiwitz on bass. You probably know him from Ween.

I first got interested in Ornette Coleman in the late 1980s when Jerry Garcia played with him (the first track I heard was “Singing In The Shower”). Right away I got his sense of playful exploration. So he’s a perfect choice for collaborator on this project. And the track he performs on, “Jnuin,” is one of my favorites. It’s wild how his saxophone blends in with the Master Musicians. His cries, his shouts of joy fit right in so beautifully, so perfectly. This is a magical track.

On an album full of interesting and surprising combinations of musical instruments and styles, “Al’Aita,” the final track, stands out. It features Howard Shore and The London Philharmonic Orchestra playing with the Master Musicians of Jajouka. “Al’Aita” has an intense build that really got right on top of me. And then it suddenly breaks, like coming upon a clearing in a jungle, where there is a sense of beauty but also danger. The track’s quiet moments are as intense as its louder moments.

CD Track List
The Road To Jajouka is scheduled to be released on September 10, 2013 through Howe Records.

Note: I also posted this review on Pop Culture Beast.
Posted by Michael Doherty at 2:58 PM