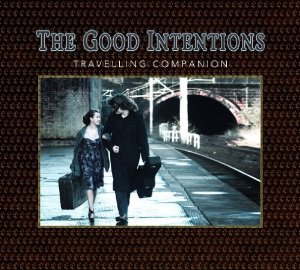 Travelling Companion, the new CD from The Good Intentions, is full of traditional-sounding folk tunes with some traditional folk subjects (such as bank robbers, trains, and imminent death), and yet all but one are original compositions, written by singer/guitarist R. Peter Davies. He and the other two members of the The Good Intentions, Gabrielle Monk and Francesco Roskell, also provide some excellent vocals on these tracks, really giving the impression that these are familiar songs rather than new ones.

This album features several additional guest musicians, including the wonderful Brantley Kearns on fiddle. I’ve seen him perform with several bands over the years, and I’m always delighted to listen to him.

Travelling Companion was produced by Rick Shea. His name seems to come up a lot for me these days. He’s involved, one way or another, with a lot of good music. (In that way, he is similar to Duke Levine.) Rick Shea also plays several instruments on this CD.

The Good Intentions formed in 2003, and are based in Liverpool.

Travelling Companion begins with “Gold Watch And Chain,” the album’s one cover song, written by A.P. Carter. Its wonderfully sad and desperate chorus is: “Oh, I’ll pawn you my gold watch and chain, love/And I’ll pawn you my gold wedding ring/I will pawn you this heart in my bosom/Only say that you’ll love me again.” It’s interesting to open with the cover, because it really sets the tone for the album, adding to the impression that all of the following tracks are traditional tunes. And maybe someday they will be.

There are sweet, mellow vibes on “Colfax Town,” a cool folk tune. I like the way the vocals blend on this one.  This song certainly has a traditional folk subject – the desperate bank robber in a gold rush town, the man no one thinks meant to do wrong and cause harm. I always loved the way folk and old country tunes would almost celebrate these characters. There is something romantic and appealing about these tales.

“Black Dog Blues” begins as a bluesy tune with some really nice work on guitar. The song soon kicks in, combining blues with a country rock flavor. It even mentions Robert Johnson and Elvis Presley. I really dig the vibe of this song. The band plays around with the theme toward the end, which is cool, as they find an interesting direction to take it.

“Hank’s Last Ride” has a relaxed country vibe with nice work on pedal steel, and some really good lyrics. I love this line: “Fame, she raised her shabby dress for me.” There are references to certain Hank Williams songs, such as “I’m So Lonesome I Could Cry” and “Montgomery In The Rain” (in lines like “Another cowboy who’s so lonesome he could cry”). The song takes place in 1952, and has the line, "Maybe make it through to 1953." Hank Williams died on January 1, 1953. This song also features some good work on fiddle.

One of my favorite tracks is “Home Town Girl,” partly because of the vocals on the repeated line, “She’s a home town girl,” partly because of its mellow vibe, and partly because of its opening line, “Well, she’s gone and taken all the best of me.” It’s hard after all our relationships, how pieces of us are gone, and everyone walks around as fractions of themselves. It’s so sad, but feels so true. This song still has a hopeful tone, with lines like “Some day she’s coming home to me” and “For I’ll love her until the day I die.”

“According To A Witness”

“According To A Witness” has a phrase that I love, and which stood out for me the first time I listened to this album – “a small and jealous town.” I’m from a town that had that feel when I was growing up. The line “And someone saw you with somebody when the lights were down” rings true from my experience growing up in a small town. And yet this is a more upbeat, fun tune. And it tells a good story.

Travelling Companion ends with “Paul The Apostle,” a spiritual tune that includes a brief spoken word section at the end. That’s Ioan Gruffudd (you might know him from Fantastic Four; he also did voices on a few episodes of Family Guy) reading a passage from the Welch Bible. Here is a taste of the song’s lyrics: “When our life’s meaning/Is shown to us some day/In our hearts, the sun will light the way/The sun will light the way.”

The Good Intentions are R. Peter Davis on vocals and guitar; Gabrielle Monk on autoharp, accordion, piano and vocals; and Francesco Roskell on guitar and vocals. Joining them on this release are Rick Shea on acoustic guitar, national steel guitar, mandolin and banjo; Greg Leisz on pedal steel, dobro and electric guitar; David Jackson on doghouse bass, accordion and piano; Marc Doten on doghouse bass; Dave Raven on drums and percussion; Brantley Kearns on fiddle; Aubrey Richmond on fiddle; and John Palmer on tambourine.

Posted by Michael Doherty at 2:14 PM