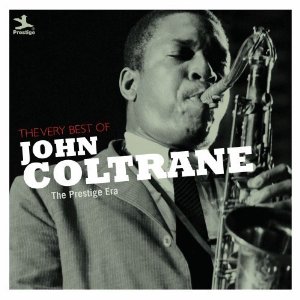 The Very Best Of John Coltrane: The Prestige Era features recordings from fairly early in John Coltrane's career, from 1956 through 1958. Of course, he was already known as a member of The Miles Davis Quintet, and had recorded with that group. The tracks in this collection show him emerging as a leader himself. You can hear the excitement in his playing on a track like Cole Porter's "I Love You," the way he's able to clearly express those wild emotions. And the incredible mastery of Coltrane and Donald Byrd (on trumpet) is captured on "Lover Come Back To Me." The work on that song is seriously impressive, the kind of thing to just make you sit back and say, "Hot damn!" (That tune also features an excellent drum solo by Art Taylor.)  And then there is the beautiful rendition of "Theme For Ernie."  So, yes, this is an excellent collection of songs.

"I Hear A Rhapsody"

The Very Best Of John Coltrane: The Prestige Era opens with "I Hear A Rhapsody," a great upbeat tune written by George Fragos, Jack Baker and Dick Gasparre. It's not far into the tune before John Coltrane is taking control, and playing like mad. Well, it's more like this cool groove, where suddenly delicious spurts of madness explode at you from within. It's something of a jolt when he stops and lets Red Garland take lead on piano. Nothing against Garland, of course, but the energy level drops significantly at that point. And that's Paul Chambers on bass.  "I Hear A Rhapsody" is from the album Lush Life.

"Nutty" is a Thelonious Monk tune, taken from the record Thelonious Monk With John Coltrane (1957). I love Coltrane on this one, with these beautiful manic moments over the steady rhythm provided by Wilbur Ware on bass and Shadow Wilson on drums. There is a real freedom in his playing on this track, these short delicious and delirious flights. It's interesting when he finishes his solo, because the song is left to somehow manage on its own briefly, and there is a moment when you wonder if it should. Of course, Thelonious Monk's piano work is excellent, and he quickly takes the song in his own wonderful direction.

"Soultrane" is the earliest track in this collection, recorded in November of 1956. It's from Tadd Dameron With John Coltrane's Mating Call, and is written by Tadd Dameron. It's a sweet, pretty tune, which picks up just a bit a couple of minutes in. The simple, understated work on drums is by Philly Joe Jones, drummer for The Miles Davis Quintet.

"Traneing In" is this collection's sole composition by John Coltrane. It's also the CD's longest track, clocking in at just over twelve and a half minutes. This tune has a great groove, with a wonderful piano lead by Red Garland to start it off. There are some surprising moments in that section.  And John Coltraine's lead has fantastic energy, a great vibe, with perfect accents by Arthur Taylor on drums. And as he gets deeper in, Coltrane really lets it go, just playing with joyous abandon. Which leads to a nice long bass solo by Paul Chambers. (Am I mad, or does Chambers include a bit of "Santa Claus Is Coming To Town"? Check him out at the seven-minute mark.)

"Traneing In" is the title track from an album John Coltrane did with The Red Garland Trio in 1957.

"Bahia" is one of the CD's coolest tracks, with a tense repeated section on bass and piano. Paul Chambers continues it on bass while Red Garland takes his lead spot on piano. And then Paul Chambers does some fantastic stuff on bass while Red Garland continues that other theme on piano. I absolutely love this track.  This is the title track from a record John Coltrane released in 1958.

Posted by Michael Doherty at 2:56 PM